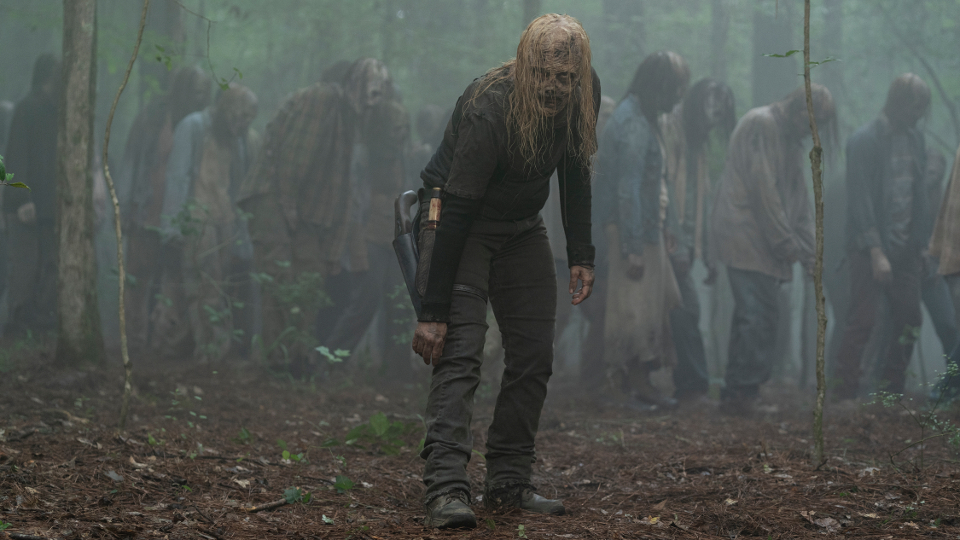 In the latest episode of The Walking Dead, a flashback revealed the origins of Alpha (Samantha Morton) and Beta (Ryan Hurst).

The episode began with a flashback to years earlier when Lydia was little girl. She and her mother, Alpha, were walking along with the dead. Lydia used earmuffs to block out the sounds. Her earmuffs were knocked off and they witnessed a woman being torn apart by walkers.

They fled into a nearby building where they came across a hooded man wielding a machete. Alpha confronted him and he said they could stay in the corridor for one night only. He later came to tell her off for humming.

After tucking Lydia in, Alpha headed out to kill some of the walkers in the surrounding hallways. She was overwhelmed but Beta came to save her. Recognising they each enjoyed the killing they finished off the rest of the strays. Once done, Alpha began cutting one open to use its insides to hide her smell. Beta helped rip open a stubborn ribcage. She called him Big Man but reduced it to Mr. B then B and named herself A. She then tried to peek under his hood but he got upset and told her to leave the next day.

Later that night, Lydia decided to prove herself. She covered herself in walker remains and went off to confront some walkers. Alpha woke up and panicked when she realised Lydia was gone. She searched frantically and found herself where Beta was living. There she found the walls covered in the words “I am the end of the world” and photographs with faces scratched out.

Alpha killed a walker without realising it was someone who Beta used to know. It looked like he wanted to kill her because of it but Lydia showed up and stepped in. Alpha asked Beta to go with them and he agreed but didn’t want to leave the walker who Alpha killed. She said he didn’t have to and handed him her knife. Beta cut the face off the walker and wore it as his new mask.

Back in the present, the Whisperers began building their herds. Frances, the girl who Alpha made give up her baby last season, and her sister (Thora Birch) were taken along to help. Frances was still traumatised at losing her child and Beta almost had her killed for endangering the group. Alpha stepped in and took her to “The Deeper Place”. It looked to be some kind of cave. Inside, Alpha made Frances kneel but she didn’t hurt her, instead she held her for a while before returning to the group.

On the way back to their territory, Frances spotted a walker wearing a baby carrier and went into a rage. She attacked Alpha, jumping on her back. The commotion drew the attention of the herd but Alpha was saved when Frances was thrown to the walkers by her sister. To reward her loyalty, Alpha gave her the new name of Gamma.

Beta later discovered that Alpha had built a shrine to Lydia. He realised she hadn’t killer her daughter as she had said. To try and prove she didn’t care about her any longer, Alpha destroyed the shrine.

At the end of the episode, we got to see the end of the premiere from Alpha’s point of view. As she walked out of the woods she looked up and spotted Carol (Melissa McBride) looking down from the cliff.

Can’t wait for the next episode? Read our preview of The Walking Dead – 10×03 Ghosts.