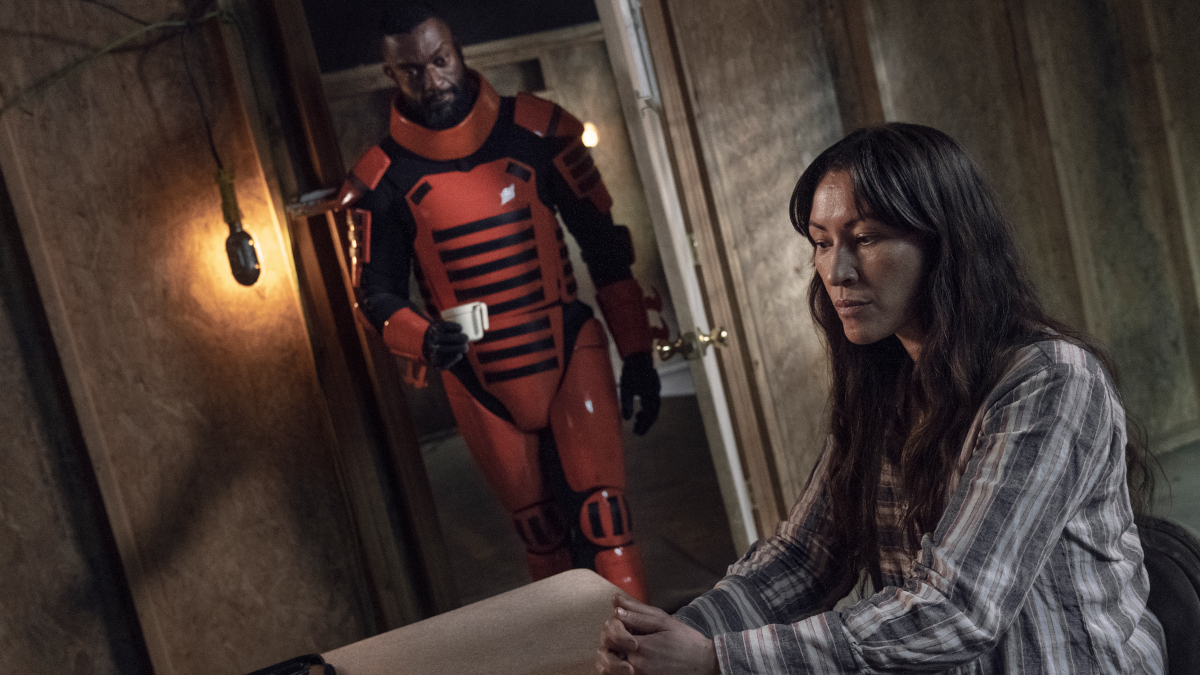 The season 11 premiere of The Walking Dead was the first of a two-part episode. Following the events of last season it caught us up with the survivors at Alexandria and Eugene’s (Josh McDermitt) group.

The premiere opened up with a team of Alexandrian’s carrying out a raid on a military base in search of food. They entered a helicopter hanger from the roof using a pulley system. Inside they found the floor strewn with walkers and crept around them.

After securing bags full of military food rations they began to make their escape. Daryl (Norman Reedus) acted fast when a rope snapped but cut his arm. A drop of blood hit a walker and the entire room of them woke up. Carol (Melissa McBride) and Maggie (Lauren Cohan) held the walkers off while everyone got to safety.

Back at Alexandria, the group held a meeting and decided they needed to find a better source of supplies. Maggie proposed taking back Meridian, her previous community, but warned the group who took it were violent. A group including Maggie, Daryl and Gabriel (Seth Gilliam) volunteered to try.

Negan (Jeffrey Dean Morgan) was forced into going with them as he had good knowledge of Washington D.C. Caught up in a thunderstorm they took refuge in a subway station. Negan suggested they wait it out but no one would listen and they proceeded along the tracks.

Along the way they came across hundreds of walkers wrapped in plastic. Each walker had its throat cut to keep them quiet. The group decided to kill all the walkers that they encountered. After one of the group were nearly killed Negan again wanted to leave. He decided to tell everyone that he thought Maggie was keeping him close just to make sure he died.

Elsewhere in the episode, Eugene, Ezekiel (Khary Payton), Yumiko (Eleanor Matsuura) and Princess (Paola Lázaro) found themselves held and interrogated at length by the Commonwealth. They hatched a plan to escape but on their way out of the facility they found a board of photographs and messages. Princess spotted one that appeared to be from Yumiko’s brother Tomi. She decided that she needed to stay to find him.

At the end of the episode, Maggie’s group came under attack by a walker herd. They found their way blocked by a tube train and had no choice but to climb on top. Dog fled underneath so Daryl went after him. Negan managed to get on the train, leaving just Maggie. She tried to climb but found walkers grabbing at her feet. She called for Negan who came back but then seemingly abandoned her to her death.

Tune in to Star on Disney+ on Monday 30th August to see the episode. Preview it with our gallery below: