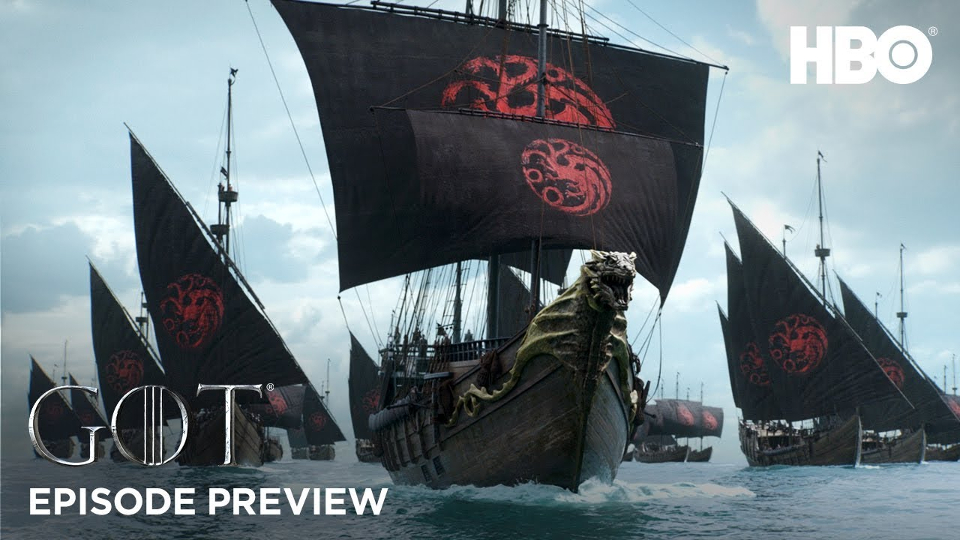 The third episode of Game of Thrones season 8 focused entirely on the Battle of Winterfell as the living made their stand against the Night King and his Army of the Dead.

Following on from the end of last episode, Winterfell scrambled its troops ready for battle. Before things got underway, a surprise visitor arrived. It was the Red Woman, Melisandre (Carice Van Houten). She used magic to set the weapons of the Dothraki aflame.

They charged out on horseback into the night, led by Ser Jorah (Iain Glen) to face the Army of the Dead. The rest of the troops at Winterfell watched helplessly as their flaming weapons were soon all extinguished. A small number of Dothraki and Jorah made it back. On a nearby hill, Jon Snow (Kit Harington) and Daenerys (Emilia Clarke) watched the battle unfold with dragons Drogon and Rhaegal by their sides.

Inside the walls of Winterfell, Theon (Alfie Allen) and his men stood guard for Bran (Isaac Hempstead Wright) in the godswood. The women and children were sent down to the crypts for safety along with several other characters including Sansa (Sophie Turner), Tyrion (Peter Dinklage) and Varys (Conleth Hill). As the troops began to be overwhelmed, they retreated inside the wall. Grey Worm and the Unsullied protected the retreat.

Davos gave the signal to light the trench but it couldn’t be seen due to the storm. Grey Worm and the Unsullied made a protected corridor to get Melisandre close enough and she used her magic to set it alight. The dead eventually used their bodies as bridges to cross the trench and then began piling up to climb the walls. Everyone inside fought to keep the dead outside of the walls but they eventually got inside. Lyanna Mormont (Bella Ramsay) was the first to die at the mighty hands of an undead giant. Before she did she managed to plunge a Dragonglass dagger through its eye to kill it.

High above Winterfell the Night King made his appearance riding the undead Viserion. Jon spotted him and he and Dany tried to attack on Drogon and Rhaegal. Eventually Rhaegal got hold of Viserion and did much damage, sending the Night King plummeting to the ground below.

Meanwhile, Arya (Maisie Williams) put her new weapon to good use thanks to her assassin skills. She was like a whirlwind as she spun around killing enemies all around. She also got overwhelmed, lost her weapon and retreated inside. Beric rallied the Hound and the pair of them went after her and saved her life. Sadly Beric was stabbed multiple times and died from his injuries. The Hound and Arya barricaded themselves in a room where they found Melisandre. She motivated Arya to keep fighting.

After fighting the Night King in the air, Jon also found himself grounded. Dany took the opportunity to shout “Dracarys” and Drogon breathed his fiery breath at the Night King. He walked away untouched, stopping at the flaming trench. Jon tried to rush him but the Night King lifted his arms, resurrecting all of his own troops and recruiting the living who had just lost their lives. This also resurrected some of the dead in the crypts leaving those taking shelter in danger.

Jon was kept away by having the huge numbers of wights. Dany landed with Drogon and used his breath to clear Jon a path. Drogon became swarmed and took off covered in attacking wights. As he lifted into the air, Dany was sent tumbling to the ground. She was saved by Jorah who fought to his last breath to keep her safe.

The Night King made a beeline for Bran in the godswood where Theon was fighting off attackers. Theon lost his life trying to rush the Night King. The Night King went to grab his sword to kill Bran but was taken by surprise by Arya. She flew through the air, Valyrian dagger in her left hand but was grabbed by the Night King. Arya dropped her dagger but caught it with her other hand and stabbed him through the chest. He immediately shattered and his entire army did the same.

The Battle of Winterfell was won and the Night King and his Army of the Dead were defeated. At the end of the episode, Melisandre walked outside, removed her magical necklace and died in her true form.

Find out which main characters died during the Battle of Winterfell and read our full recap.

In episode 4, we get to see the aftermath of the Battle of Winterfell as the survivors in the North work on how to tackle the threat from the South – namely Cersei (Lena Headey) and her armies.

The trailer begins with a shot of fires still raging at Winterfell. The action cuts to King’s Landing, where a still smug Cersei, looks down from the Red Keep at her army with Euron (Pilou Asbæk) by her side.

Back at Winterfell, it looks like a bit of a clean up is in progress as the survivors get ready for what’s next. Daenerys is heard to say “We have won the Great War. Now, we will win the last war. We’ll rip her out root and stem.”

While Dany is heard speaking we see a montage of snippets. There’s an upset looking Sansa (Sophie Turner) stood with Arya and others. It looks like they may be holding a mass funeral for those that died. Another shot shows Tormund, Jon, Dany, Sansa, Arya, Grey Worm and Sam carrying torches, presumably to burn the dead. Behind them Bran, Varys, Missandei, Tyrion, Ser Davos, the Hound and the rest of the survivors stand and watch. Also if you look closely behind Sam (around the 18 second mark) you’ll see that Ghost also survived!

Another shot shows what appears to be a big, well deserved, celebration in Winterfell’s Great Hall. Drinks are raised and there is much cheering.

Other quick snippets appear to show Arya and Gendry kissing, Dany stomping off looking annoyed and Euron kneeling before Cersei. Jon is seen riding horseback, possibly leaving Winterfell with Ser Davos and Tormund behind him. There’s also a Targaryen fleet off somewhere, maybe the Iron Islands or King’s Landing?

There’s a shot of Dany checking on Rhaegal and another of him flying over a ship at sea. It wasn’t immediately obvious if Rhaegal and Drogon had survived the battle but another shot shows both dragons flying over Winterfell as Sansa watches.

The final shot also appears to show Drogon behind Dany as she’s looking up and smiling at something. Will Jon and Dany leave Sansa behind at Winterfell?