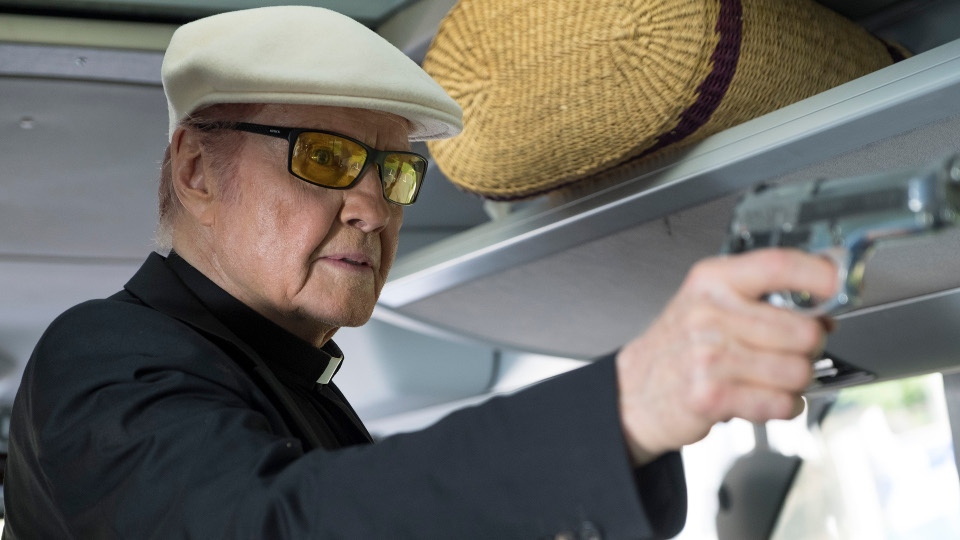 In the latest episode of Ray Donovan, Mickey (Jon Voight) went ahead with his robbery.

The episode opened up with a man breaking into Sam Winslow’s (Susan Sarandon) place and waking her with a gun to her head. He told her to drop out of the race for mayor. Winslow bit him on the hand so he pistol-whipped her, knocking her out.

Meanwile, Ray (Liev Schreiber) and Novak (Lola Glaudini) were continuing their night of rough sex in his bed. When he awoke the next morning, she was gone and Winslow phoned him. She explained that someone had broken in.

Ray picked up Lena (Katherine Moennig) and headed straight on over to check on Winslow. She was ok but shocked that someone had broken in. Ray left Lena to look after her and said he’d take care of it. Winslow chatted a little to Lena to find out about her past.

Ray went to ambush the mayor (Zach Grenier) at his health club. He told him to leave Winslow alone and when the mayor denied knowing anything, Ray punched him in the throat. Before he left Ray threatened to kill him if he went after Winslow again.

Meanwhile, Mac (Domenick Lombardozzi) was getting pushed by Internal Affairs. Mac wanted to hand the wire back but they wanted more, specifically about the mayor. Mac was left with no choice but to continue wearing it for them.

Ray’s next course of action was to try and track down the CCTV footage from outside Winslow’s building. He first called on an old friend who tried to hack into the network but it was too secure. He made Ray smile by telling him a story of when he first met Ray’s deceased wife Abby. He said he could try and get into the NYPD camera’s but it would take a couple of hours. As a backup Ray called Mac for a favour to also get the footage.

Mac called Ray back a little later and said those camera’s were offline, like half of the camera’s in the city, and just left up as a deterrent. Disappointed, Ray told his friend to stop looking as there was no point. However, he’d already accessed the footage so it meant Mac was lying. Ray took a look at the footage and recognised the intruder as Dan Bianchi (Chris Tardio), a cop.

Ray went to find out why Mac had lied but Mac suggested, as a friend, to not only leave it alone but to shut shop and leave the city. Ray’s not one to do as he’s told but he seemed a bit worried and went to tell Winslow that the mayor had the cops. She wasn’t worried and said she’d go after them. Ray said he’d find her some answers.

Elsewhere in the episode, Terry (Eddie Marsan) was still stuck looking after Bunchy’s (Dash Mihok) daughter Maria. He got a call asking if he was available to come down to the illegal fight club for a fight. He seemed happy about it but needed someone to watch Maria. He called Bridget (Kerris Dorsey) and had her come to the boxing gym where he left her with Maria under protest.

Before the fight Terry used his Parkinson’s device to boost the effect on his brain. It seems to give him some kind of advantage but at what cost? He absolutely destroyed one of the best fighters at the club which opened up a new opportunity called the Eliminator. This is an 8-fighter last man standing wins $50,000 event but he turned it down. Knowing it’s a bad idea he turned it down but after seeing Bunchy’s troubles he later accepted the invite to fight. Please don’t kill Terry!

That brings us onto the other big story this episode, Mickey’s robbery. Mickey was aboard the bus tour with the rich people while Bunchy waited outside a church. Both of them were dressed in their priest outfits. Mickey pulled a gun on the driver and had him pull into the church car park. Bunchy joined him on the bus as Mickey announced he was robbing the passengers and pulled out a bag to collect his spoils.

One of the male passengers stood up and pulled out his own gun. He looked nervous and Mickey told him to sit down or he’d shoot him. Knowing they didn’t need to make things even worse, Bunchy told his father not to kill the man or he’d shoot him. The rest of the passengers failed to comply so Mickey called it off and snatched a handbag off a woman who he called mean. They got away with some women’s tights and $32.

They fought as they drove away until Bunchy spotted a pawn shop and decided they’d rob that instead. They pulled the tights on their heads and ran inside. It was an easy target and they got away with a bag full of cash. The pair of them couldn’t believe it and were bouncing at their effort.

Now all they had to do was collect Maria. Mickey waited nearby while Bunchy went to get her from Terry. When he got there he found Bridget and Terry outside. Inside Teresa (Alyssa Diaz) was inside with Maria because Bridget had called her.

Bunchy and Teresa argued and he blamed her for cheating on him. He’d done what he’d done because of how upset he was that someone who loved him could do that. Teresa said it was all a lie and that she had never loved him anyway which broke his heart. Bunchy snapped and said she was mentally ill and that he should never have rescued her when she was in the hospital. Teresa slapped him and stormed off with their daughter.

He went back to Mickey who wanted to know why he’d taken so long. Then Mickey realised that he didn’t have Maria. Bunchy said he wasn’t going with him, told him that he loved him and walked off to get drunk. Mickey shouted that he loved him too but now looks to be at a loose end as he didn’t want to head to Vietnam on his own.

At the end of the episode, Bridget called her father to tell him she missed her mother. He said he did as well and they both agreed they didn’t want to fight any more. Bridget said she was worried she’d lose him too and he promised that she never would.

Ray had to cut the call short because he had two cop cars on his tail. They pulled him over and it was Sgt. Mikey ‘Rad’ Radulovic (Tony Curran) and Bianchi. They had Ray throw his keys out the car then get out with his hands up. After knocking him to the ground they cuffed him and took him away in the back of one of their cars. How will Ray get out of this one?