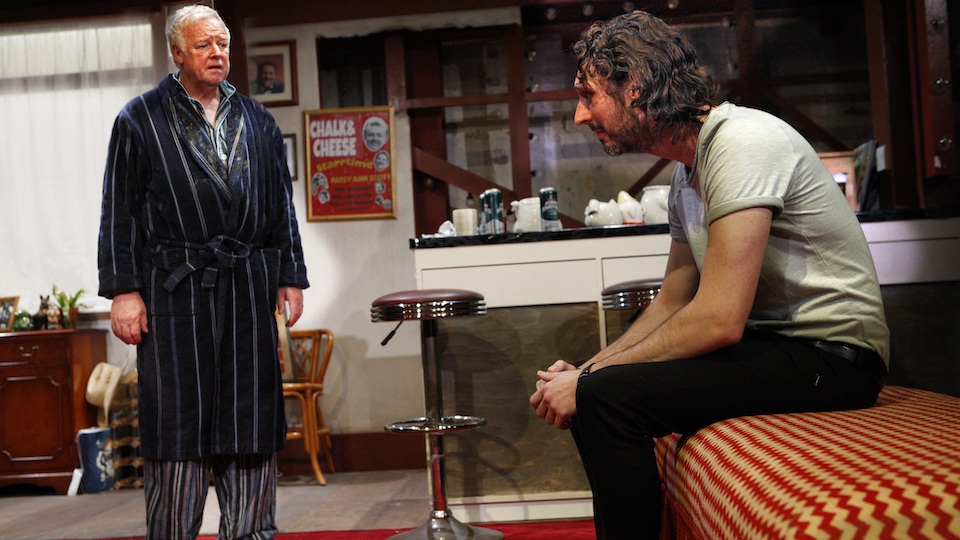 The sound of squawking seagulls mingles with incidental fairground organ music to instantly transport the audience to the seaside as we file in to watch The End Of The Pier. Park Theatre 200 hosts an intimate near theatre-in-the-round space [stage surrounded on three sides] where, from the circle, you already feel quite literally perched on the edge of your seat, watching the action unfold from above.

The set oozes the run-down feel of a neglected British seaside town, later revealed to be Blackpool, with show posters and light-bulbs lining the exterior. Inside, the stage houses a shabby sofa, a coffee table strewn with papers, mugs and beer tins. A kitchenette and a sideboard crammed with knick-knacks and framed photos. We meet Bobby (a genius piece of casting in a role seemingly written for the enduringly likeable Les Dennis, the Liverpool-born comedian who started out entertaining crowds on the northern Working Men’s Club circuit before making it big on 70s talent show New Faces), who’s one half of the one-time household name double act, ‘Chalk and Cheese’. Their framed posters from former glory years line the living room wall. Clearly, Bobby’s now living alone, casting a slovenly shadow as he sloppily makes himself a late night sandwich before slouching in front of the TV.

The staging is well directed from the off as Bobby turns on a ‘Live At The Apollo’-inspired comedy show as, simultaneously, Mike Armstrong (impressively performed by a slick, much matured Blake Harrison, worlds apart from the dunce Neil he played in The Inbetweeners) strides onto our stage to perform stand up for our benefit, as if we are the recorded TV crowd. We observe Bobby’s skeptical reactions to light-hearted material about changing duvet covers as he watches under the glowing light of the TV. It’s remarkable to feel the mood in the theatre shift to one of a receptive comedy crowd as the fourth wall’s broken. The authenticity of which was aided by a Stand-Up comedy coach, Andre Vincent, to assist in the performance of a convincing, well-constructed ‘modern’ stand up comedy set with a safe, observational slant. The writer, Danny Robins, himself performed stand up in his late teens and early twenties in the North East before working writing satirical jokes for radio, TV and stage. The End Of The Pier is a comment on comedy in many forms. The history of comedy, the comic vs the comedian, the shift in audience appetites and sensibilities, and the power that jokes possess are all put under the spotlight through the characters’ perspectives in this fascinating 1 hour 45 minute journey.

As the characters’ interact, gag-cracking Bobby is revealed to be Mike’s father. Their relationship is clearly strained. We learn that widower Bobby – an entertainer from the old days performing at Working Men’s Clubs before drawing a prime-time audience of 20-million in his heyday – suffered a very public fall from grace alongside his comedy partner, Eddie, who died not long after. Bobby’s spent the rest of his life living in the past, bitterly regretting his ‘mistake’ in telling an exceedingly non-PC gag which left his career in tatters. Mike, we learn, has distanced himself from his father and is successful in his career telling nice, observational gags. He’s left exasperated by his father’s inability to take anything seriously as he visits with a favour to ask. There’s been an incident the night before and Mike pleads for his dad’s help.

Next, we meet Mike’s pregnant girlfriend – and BBC Comedy Commissioner – Jenna (performed with a keen sense of fun, comic timing and, later, poignancy by Tala Gouveia) who embodies all we expect from a London-centric social media fuelled existence. Far from privileged, though, mixed-race Jenna has had her share of struggle, and we slowly watch the seed of tension grow.

Bobby’s flippant gags keep the laughter count high but he’s soon no choice but to start taking things very seriously as both the plot and Mike’s integrity start to unravel. Racism, both ‘casual’ (the word Golliwog, uttered in context of a household object, drew an audible gasp from the audience) and shocking, disgustingly hate-filled, is examined to a deeply bitter end. It’d be rude of me to reveal any further hint of the plot other than to say that the second act is stolen by Bangladeshi Mohammed (an intelligent, cheerful and razor-sharp comedic performance by Nitin Ganatra) who knows exactly how he can turn the power of humour and social media in his favour. Danny Robins has written a well-woven narrative to ensure his punchlines bring big laughs and that the ending packs a punch. The take-home message? Beware cracking jokes you don’t mean – and judge not a comedian solely on his or her material. Look to the truth behind words and the power they hold.

The End Of The Pier is sharp, witty writing for a London audience with Robins’ sensibilities from the north shining through. During the interval I overheard two audience members discussing whereabouts Blackpool is, as if it were located in a different country. Their conversation brought the relevance of this play all the more into focus for me. I grew up near Liverpool with several family days out in Blackpool happily spent. For many more Brits it remains a popular destination for visitors looking for entertainment in various guises. Stags, hens and families all mix in the seaside town, and yet it is so easily forgotten or, at best, neglected, much like other run-down resorts across the UK. The End Of The Pier examines comedy, highlights racial tensions and the political divide between towns like Blackpool that are still living and breathing outside London. The term ‘Brexit’ is thankfully absent from the script but the debate between ‘the 52%’ and ‘the 48%’ is inescapable. The fierce divide of opinion is highlighted in this refreshingly funny piece of drama filled with twists and turns that’ll keep you guessing till the end. Will you laugh or cry? Only one way to find out – go and see it.