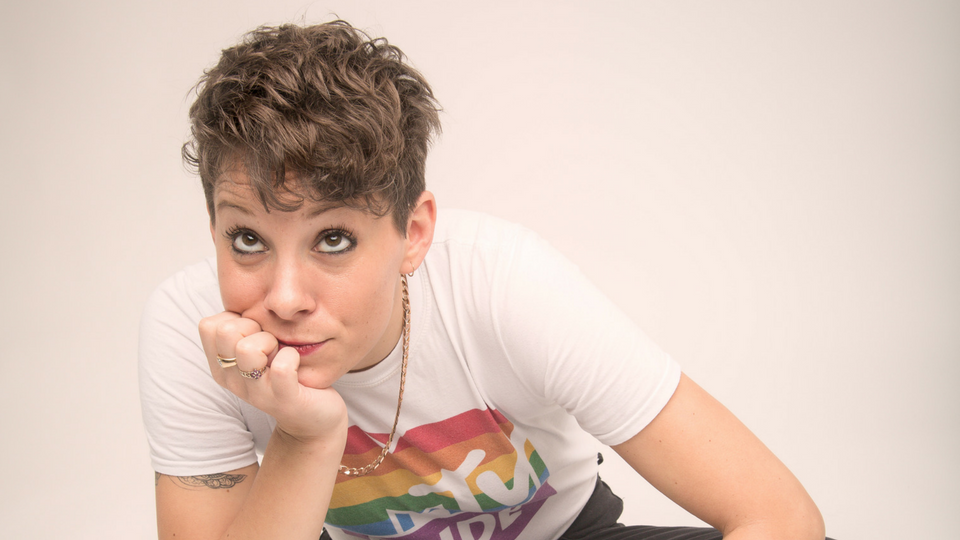 Following the success of ‘Keeping it Classy’ (which relaid the aftermath of a sequence of bad luck, including family bereavement, a break-up and a road traffic collision with a deer), Suzi Ruffell is back for Edinburgh Fringe with another hour show from the last twelve months of her life.

Suzi is one of the few people I have spoken to in living memory who genuinely loves her day job. It definitely shows. As one of the hardest working and prolific comedians constantly touring and gigging (as shown by the emotional reunion posts with her cute cat Velma on Instagram), Suzi has found a wide audience not just through her stand-up, podcast and writing but now burgeoning TV career.

The multi-talented comedian, who recently appeared on Live from the BBC on iplayer, is delving deeper into what keeps her awake at night, away from the stage. From the big world issues to personal worries, she’s already been writing and testing out material  for her latest Edinburgh hour Nocturnal in another continent (Melbourne Festival Comedy Roadshow), and is currently perfecting it with previews until it’s festival-ready.

I decided to set-up a conference call with Suzi and her tiny cat Velma to see how preparations are going.

How has your year been compared to the last one? Are your family well? Is the British deer population thriving again?

No-one has died, which is great, I haven’t killed any more deer, I haven’t had a break-up, my cat’s still alive, and I’ve had a very work good year and a very lovely life year. Don’t worry though – I’ve still got enough to talk about on stage.

Was it cathartic performing Keeping it Classy day after day on tour while life was improving in real time alongside it?

It definitely was. It was cathartic in the writing of the show and the sharing of it and perming during the Edinburgh run, the tour that followed right up to the Live from the BBC show on iplayer. What was lovely was how people were getting in touch with me and saying that they’d experienced a year like that or a break-up like that. That’s what I love about comedy as it can link us all and make the weirdness of life feel a bit more normal. I’m pleased that’s now done, covering that part of my life. It was a tough year and I’m now ready to talk about other things. It was good to put the pen down and start afresh and think ‘what am I going to talk about this year?’.

How did the tour go?

I was so delighted  that an audience came to the tour, for example the Birmingham gig audience were great – and I don’t know anyone in Birmingham! What I really liked about last year’s show was getting on stage and being really excited about telling the story.  I’ve tried to recreate that this year with this year’s show. Plus, it taught me that audiences are now coming to see me in my own right to hear what I have to say, and not just as the bonus support slot [Suzi has supported Josh Widdicome, Alan Carr and Ramesh Ranganathan on their tours] and that’s really nice.

Tell me more about this year’s show, Nocturnal, and how it came together?

I’d spoken a little bit last year about having anxiety, the different parts of it; from the big world wide worries to the personalised worries. It’s a different show in that I’m looking outwards a little bit more more than I have in other shows. I only go back from Australia a couple of weeks ago and was writing it on the road, trying out bits on another continent which was interesting and fun. I have a few previews left to really focus on it and make sure that opening night is great and everyone who comes along enjoys themselves.

Guys, I am blown away by all the lovely tweets about ‘Live From The BBC’ it was such a joy! To say thanks heres a lovely picture of Velma. pic.twitter.com/6B1jkqNGc0

You opened Live From the BBC addressing audience assumptions of those who may not have seen your work before. As your comedy voice develops and you grow your audience even more do you think there’ll be less need to do this?

I never want to assume anyone knows who I am. There are people who always come to my shows, as I’ve created an audience from what I do online, my podcast or historically from supporting other comedians on tour. I don’t feel the need to define myself that much, but my sexuality is still something I want to talk about on stage as I feel like being a gay woman is really unrepresented. However, I can only talk about my own life. As a comedian, what I do is really personal, it all comes from the truth and my experience of the world and who I am. There’s always going to be some identity stuff in there. That’s why with Nocturnal this year, the audience gets to know me in a way they haven’t got to know me before. It’s more of my personality off stage, which is different from my off stage persona. Usually the audience may assume that I come across as very confident, but may not realise that I’m someone who wakes up in the middle of the night with anxiety and worries and is terrified and can’t get back to sleep.

This is your fifth solo hour. What motivates you to maintain variety in your work?

I’m developing an audience and I want to take them on a journey and not write the same show every year. This show has much more honesty in it as I want to dig a bit deeper to challenge myself in a way that I can make funny an interesting over an hour. Working on another hour also helps you work out what kind of comic you want to be. I’m doing more social-political stuff this year rather than talking about specific named politicians. It ensures I keep my self interested as well, as I’ve been doing stand-up for nine years.

Do people you encounter off-stage who aren’t your mates expect you to be funny all the time?

Not so much audience members after shows, as hopefully I’ve just made them laugh. More people like my parents friends, or friends of friends who’re like ‘oh you’re  comedian, make us laugh’ which always makes me want to shoot myself in the face, but I do get it though, cos whenever I meet a GP I ask them to take my pulse and say ‘ am I still alive?’. Ultimately, I love my job and I’m very lucky to do it, so I’m fine with it.

In a world where it’s harder to get coherency from politicians, where do you draw the line with talking about politics and social issues, or Brexit, which might be going on for our entire lives?

Brexit doesn’t really come up in my show this year. I don’t really have anything else to say on it mainly as nothing has really changed apart from a whole new cabinet and  it makes me want to scream. There’s a lot to be said on it but it’s very difficult to make it funny as it’s such a fucking mess. What I’m talking more about this year is homophobia from a slightly different angle as did a lot of travelling to Australia as well as Sri Lanka – where homosexuality is yet to be decriminalised. I like doing socio-political stuff but more than anything else, I want my show to be funny. If the byproduct is that the audience take something away with them great, but more than anything I just want to make a funny show about the last year of my life, which provides a night out that everyone can enjoy.

You’re great on TV (Suzi recently made her Mock the Week debut), what types of formats would you like to explore beyond those which carry stand-up themes?

The TV elements of my career are just starting which is very exciting, though at some point I would love to do a chat show as well as documentary style stuff, like Romesh has done. I love doing stand-up, and have had great feedback from my TV appearances online. I got so much love from people on social media which I wan’t expecting. But I’ll always be doing stand-up alongside any TV.

Any plans to do more writing?

I’ve got a couple of projects I’m pitching at the minute, as well as a script I’m working on with Jenny Bede, which is the untold and underrepresented story about female friendship.

What eventually sends you to sleep if you’re up worrying?

I count backwards and listen to rain sounds. Velma [Suzi’s cat] gets into bed with me and I squeeze her until she bites me for no reason as she is a bit of a bitch. It’s very much all on her terms but I like that because I’m always very attracted to a strong woman, and she’s also adorable.

Velma, anything to add?

To watch Suzi Live From the BBC visit https://www.bbc.co.uk/iplayer/episode/p06b6475/live-from-the-bbc-series-3-3-suzi-ruffell