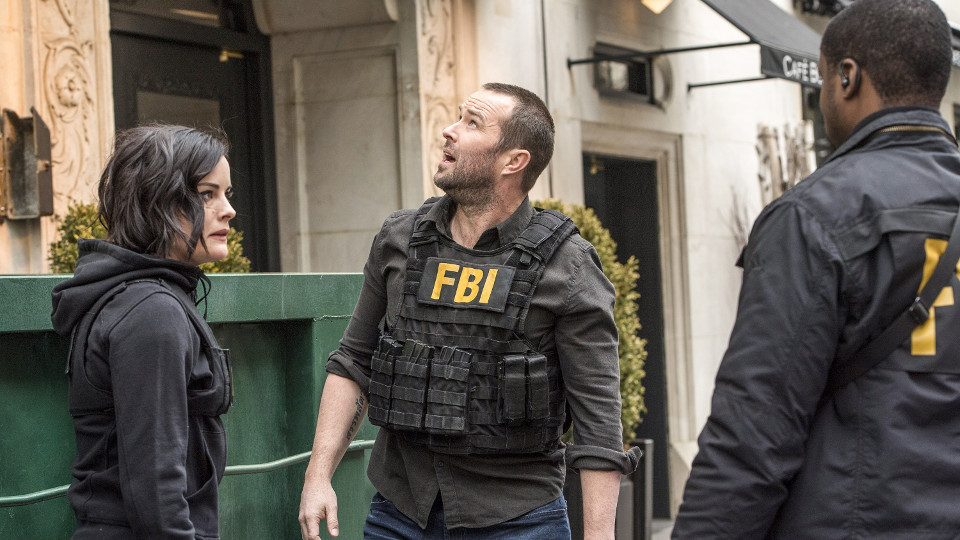 In the latest episode of Blindspot season 3, Roman (Luke Mitchell) tried to put his plan B into action.

The episode opened up with a flashback to when Jane (Jaimie Alexander) and Roman were kids. They were playing a board game together while their mother, Shepherd, watched and kept score. Jane was running rings around Roman and each time she won, Roman was assigned another chore to do.

Knowing that Roman couldn’t beat her, Jane decided to let him win the final game. Roman didn’t realise that she let him win and celebrated excitedly at finally winning. However, Shepherd knew what Jane had done and instead punished her by giving her all of the chores to do. Roman said it wasn’t fair but Shepherd wouldn’t listen.

At the FBI, the team were trying to determine where Crawford would attack. Rich (Ennis Esmer) and Patterson (Ashley Johnson) discovered that a warehouse had been robbed. A bunch of chemicals were stolen which when mixed with a specific chemical would create a bomb.

They worked out all the locations that had supplies of the other chemical but had no idea which one Roman would target. Jane had a memory that this was a plan Roman was working on in their past but couldn’t remember the full details. She proposed talking to Shepherd and the team made arrangements with Keaton to bring her in for questioning.

Weller (Sullivan Stapleton) sat down with Shepherd but she refused to talk. She said she would only talk to Jane and Weller wasn’t happy. While the team wondered what else they could do, Jane volunteered to sit down with her mother for the final time. Shepherd tried an apology to Jane and even shed some tears but it seemed to be an act. Eventually she gave up the location that Roman might rob.

Sadly, for the team, it was too late and the chemicals had been taken before they could get to them. They worked out that an office supplies vehicle was probably used for transport. After tracking the vehicle down, they determined that the likely target was the United Nations.

Meanwhile, Roman and Blake (Tori Anderson) were checking out a hotel in view of the United Nations. Roman was suffering from his mysterious condition but kept it hidden from Blake. He demanded to see every inch of the hotel for peace of mind that it was secure. He faked not feeling great to get away from Blake so he could get to work on his plan.

The FBI team rushed to the United Nations and began an evacuation. They discovered that the truck had already made a delivery and Reade (Rob Brown) and Zapata (Audrey Esparza) located the delivery bay. There they noticed a laser printer that appeared to be powered on, despite not having power. Opening it up they found they had less than a minute to disable the bomb inside. The chemicals were hidden in the toner cartridges and they managed to disconnect them all before it exploded.

Despite the win, Patterson had a bad feeling that something wasn’t right. It all seemed a bit too easy and she was right. A conversation with Lynette revealed that Crawford had a plan to build a pipeline through the land he bought. The current route for the pipeline was through two countries and their leaders were both at the United Nations.

They realised that the United Nations wasn’t actually a target. The bomb threat was designed to get the leaders evacuated so that they could be more easily assassinated. Weller and Jane wanted to take the leaders to a safe house but that went against protocol. Instead they accompanied them to their designated evacuation point.

Roman and his team began their assault on the building where the leaders were held. Patterson was able to guide them to a different part of the building away from Roman. There Jane kept guard while Weller sent the leaders down a waste construction chute. The chute broke after the leaders were safe so Jane and Weller had to jump to safety. Roman’s plan had failed.

Back at the FBI, they discovered that one of the leaders had their phone stolen. CCTV revealed that it was Zapata who took it. She said the CIA had forced her to take it, however Keaton denied any knowledge of it. Zapata was fired but refused to go back to the FBI when the team begged her. Reade went after her and finally kissed her but she said she couldn’t do it. Later that night, Zapata turned up at Reade’s apartment and the pair finally got it on.

At the end of the episode, the tattoo database finally stopped glitching. A new hit came in that pointed at a video of Roman. It was a message for Jane that he was ready for one final game. Looks like the finale will be Jane vs Roman.

Read our preview of Blindspot 3×22 In Memory.