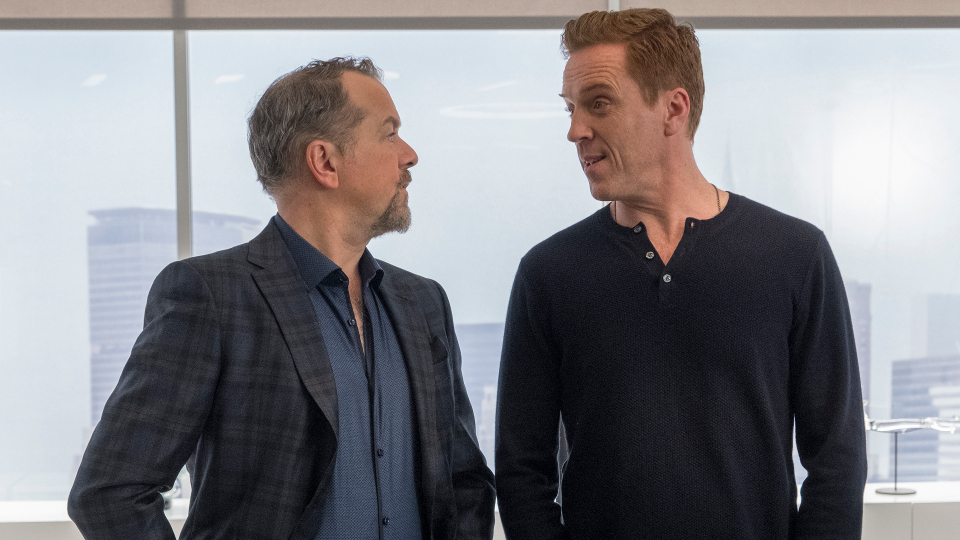 On the latest episode of Billions, Axe (Damien Lewis), Chuck (Paul Giamatti) and Wendy (Maggie Siff) hatched their plan to stay out of jail.

The episode opened up where the last one left us, with Axe, Chuck and Wendy working out their next moves. When Wendy got up to grab a drink, Axe and Chuck spoke about how to keep her safe. They agreed they needed a fall guy but weren’t convinced that Wendy would go for it. When she came back the first thing she asked was who their patsy was going to be and took them both by surprise.

Chuck paid a visit to Dr. Gilbert (Seth Barrish) and explained that the slide was being planted in Axe’s fridge. What Gilbert didn’t know is that Chuck was distracting him while the slide was placed in his own fridge. Later the FBI, raided his home while he was spending time with his family. They kicked his door in and found the slide taped to a bottle of ketchup in the fridge.

In custody, Chuck got to question Gilbert and pretended that he didn’t know him. Gilbert accused Chuck of being the guilty one but he ignored him and pressed on. While waiting for his lawyer Chuck pushed him some more. As well as the slide they had framed Gilbert for Wendy’s Ice Juice short and put the money in his account. Chuck told him at the end of the day it was about justice and they knew he had held back treatment to Donnie last season to fund his own research.

The next thing that was needed to keep Wendy safe was the modify her phone records. This was a complicated and difficult task that Axe’s fixers John (Brian Wiles) and Timmy (Tom Lipinski) were unable to achieve.

Instead Axe went to see his old fixer, Hall (Terry Kinney) who is still in hiding and told him he needed his help. Hall found some dirt on an IT guy and surprised him by being sat on his bed when he awoke. Hall told him to change the records or he’d leak the info he hand which would land him in prison.

In court, Bryan Connerty (Toby Leonard Moore) pushed for Axe to go to trial while Bach (Glenn Fleschler) tried to avoid one. Connerty looked to be getting somewhere and the judge eventually agreed that they needed a trial after all.

Meanwhile, Axe had wondered if they could use Mafee (Dan Soder) to help keep Wendy in the clear. Problem was they had no way to use him. Or so they thought, Wendy revealed that Mafee fancied her and that she could use that to get the job done.

She visited his apartment and flirted with him while talking about how innocent she was. She said she was probably going to jail but convinced Mafee to say he’d called her about Ice Juice. Along with the phone records it would be enough to keep her safe.

As Connerty was about to celebrate securing a trial, the new information came in and he had no choice to withdraw and see Axe go free. Attorney General Jeffcoat (Clancy Brown) later fired Dake (Christopher Denham) over the situation. Chuck convinced Jeffcoat that they should prosecute Gilbert.

Watch the Billions 3×08 trailer below:

The official synopsis for Billions 3×08 reads:

Axe tries for a fresh start at Axe Capital. Chuck asserts his political autonomy and wrestles with whether to honour his word to a friend.