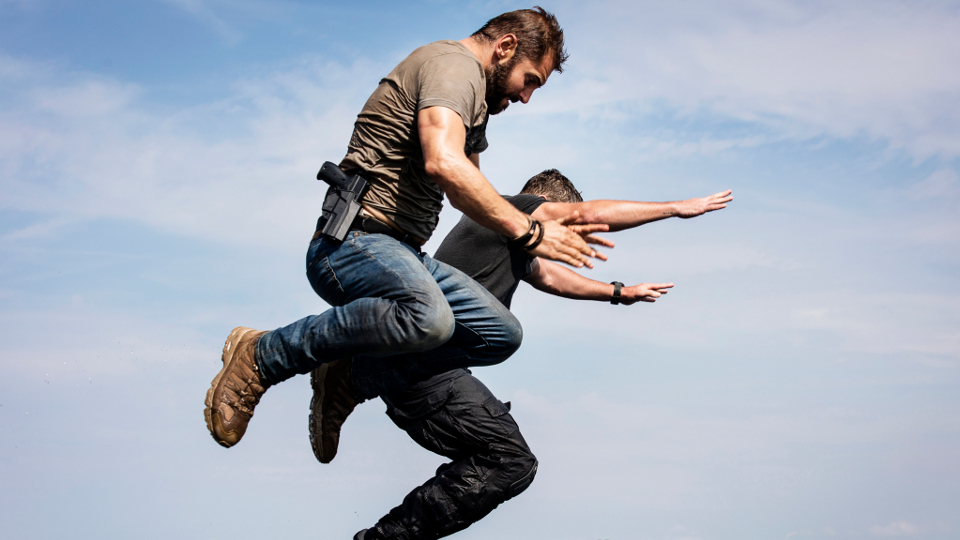 In the season finale of Strike Back, Section 20 worked to put a stop to Ives (Trevor Eve) and Idrisi (Don Hany).

The season finale opened up with Mac (Warren Brown) and Wyatt (Daniel MacPherson) fleeing after killing Lowry at the end of last episode. Ives had his men in pursuit while he and Idrisi went off in search of the Atlas.

Mac and Wyatt managed to steal a boat and fled after Ives. Meanwhile, Ives and Idrisi boarded a boat. There they were ambushed by Russian special forces who were alerted last episode by Lowry.

As Mac and Wyatt closed on Ives’ boat, they were attacked by two Russian attack boats. Their engine had been hit and burst into flames. It forced Mac and Wyatt to jump overboard before the whole boat went up.

Meanwhile, back where we left Novin (Alin Sumarwata) last episode, she was still with Stonebridge (Philip Winchester) and Scott (Sullivan Stapleton). The three of them fought their way out and killed all the attackers they came across. Stonebridge revealed that he and Scott were on the trail of the Atlas. Reynolds (Roxanne McKee) arrived and recognised Stonebridge and Scott from when they were in Section 20.

Idrisi revealed the Ives that the Russians were also after the Atlas and offered to pay more. He offered to pay double but Idrisi said he was responsible for Lowry’s death. Ives tried to lighten the mood with a bad taste joke against the Russians. When he finished they executed him and he fell overboard.

Mac and Wyatt made it to shore and called Reynolds with the location of the Atlas, Avet Island. Reynolds confirmed that Donovan was out of the picture. They agreed to go after the Atlas. Reynolds told Stonebridge that they needed to get to the Atlas to keep Section 20 together. Stonebridge gave her a phone and said to stay in touch, he and Scott would stay behind to delay the attackers. After Section 20 left, the boys spoke of stealing the Atlas after 20 found it.

Reynolds called Whitehall and wasn’t impressed that Donovan had been given clearance to kill the team. Whitehall confirmed that if they got the Atlas they would be reinstated. They were warned off against being unsuccessful. They destroyed one of the Russian cars before being picked up by Mac and Wyatt.

The team arrived on Avet Island and made their way through the rain to the location of the Atlas. Reynolds and Mac looked for an overwatch position while Wyatt and Novin went inside the mausoleum. In the center they found a sarcophagus and began searching. Outside, Idrisi and the Russians arrived while Mac and Reynolds kept watch.

A firefight broke out and some of the Russians went inside while the rest tried to flank Reynolds and Mac. Wyatt and Novin hid when the Russians entered and watched them find a hard drive which contained the Atlas. They tested it and said they needed a day to decode.

Outside, Mac and Idrisi fought each other, Mac got the upper hand and executed him. Inside, Novin was grabbed and she pretended to be undercover which bought her some time until Wyatt arrived. The Russians got away with the Atlas.

Reynolds made a call to Stonebridge and asked for their help. Section 20 met up with Stonebridge who took them to an old KGB safehouse. He knew the owner and they were welcomed by a man named Victor. Novin grabbed some whiskey and the team had a drink for Jensen. Wyatt looked up intel on the Russians and confirmed they were Russian GRU Black Ops.

At the data center the team waited for the power to go off. They called Stonebridge while Scott tried to smash an electrical panel up. The power remained on so Scott and Stonebridge shot it to pieces. After they had confirmation the power was out, Stonebridge told Scott they should go back to São Paulo.

Novin blew a hold in the roof of the data centre and the team rappelled in. Mac and Reynolds took out some of the staff to gain access to a more secure area. They found a steel security gate with guards on the other side. After opening it they killed the guards and moved in. Meanwhile, Reynolds went off to the security office. Outside many GRU vehicles arrived on the scene to prevent the theft.

A firefight broke out while the team waited for Reynolds to open the next door. She succeeded and the team went inside. They had two minutes before a self-destruct would activate destroying all the data. Wyatt spotted a hand print scanner and found it stopped the countdown while his hand was on it. It was a dead man’s switch that he would have to keep holding.

Novin went off and came back with a jeep. She said they could use it to drag the server out. They had to leave Wyatt behind to keep holding the switch. It worked and they got the server outside. Wyatt had 87 seconds to find himself a way out but was immediately attacked. He fought off the Russian and eventually killed him.

Somehow the switch was broken and he only had 30 seconds left. He said his goodbye’s to the team but then spotted a vent in the floor that he could climb into. The building went up but he made it out alive.

At the end of the episode, the team exchanged the server for the Atlas. Mac checked that the encryption on the Atlas was intact and that the hard drive hadn’t been cloned. The Russian’s began to leave and the team prepared for a double-cross. Mac bought them some time while Wyatt gave fire from a distance. The team escaped under a hail of bullets, picked Wyatt up and the season ended as they returned fire.

Strike Back has been renewed for a seventh season by Cinemax.