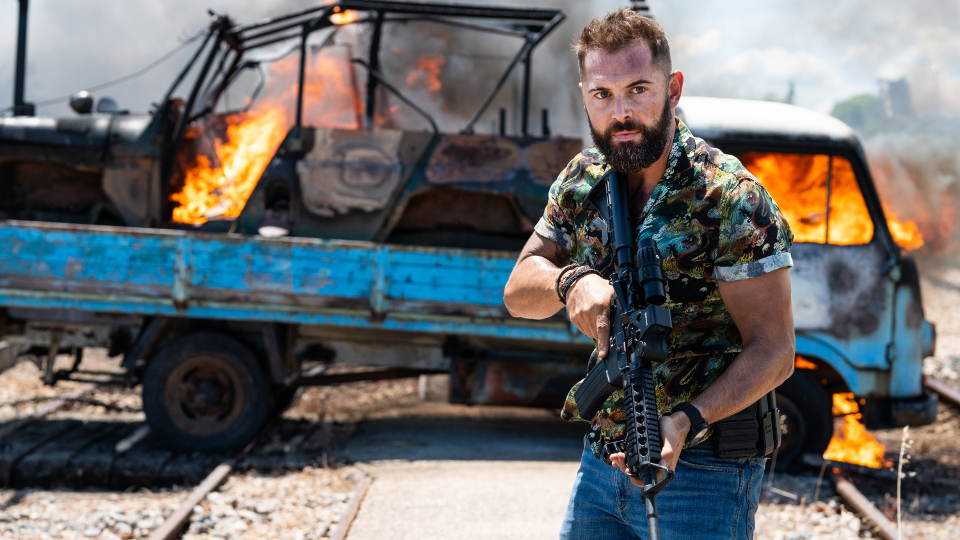 The season 8 premiere of Strike Back: Vendetta saw Section 20 deployed to Kosovo on a supposed rescue mission.

The team went up against the Albanian Mafia in an attempt to extract British scientist, Dr Helen McCluskey (Lucy Russell). After killing the enemy and finding McCluskey, Coltrane (Jamie Bamber) revealed that their true orders were to execute her.

Mac (Warren Brown) tried to stop the Colonel before stepping aside. However, Coltrane hesitated and decided to push her for more information about a bioweapon that the Albanians were after. Before he could find out anything further they came under attack and McCluskey was killed by a sniper.

After they escaped, Chetri (Varada Sethu) identified the McCluskey’s address and Coltrane sent Wyatt (Daniel MacPherson) and Novin (Alin Sumarwata) to check it out. There they came up against the sniper, Jovan (Tomi May) and just managed to get away with their lives when he pulled a grenade.

Meanwhile, Edon Demachi (Goran Bogdan) took a team to recover the bioweapon. Section 20 rushed to stop him but were too late and he escaped. However, they did managed to shoot and capture Jovan. Edon went back home and was confronted by his wife Arianna Demachi (Ivana Milicevic). She suggested that they kill Jovan as he obviously knew too much.

Coltrane thought he remembered Jovan from the end of the Kosovo war but he looked different. He concluded that he’d had facial reconstruction surgery to alter his appearance. He awoke Jovan in the hospital using a shot of adrenaline but Jovan denied changing his identity. Chetri hacked Jovan’s phone and identified a meet with Edon in Venice. The team were sent to observe.

There they watched Edon hand over a sample of the bioweapon and tried to intervene. The buyers ran off and tried to use the weapon in the crowded streets but Mac and Wyatt stopped them.

Edon’s men came to assassinate Jovan but were unsuccessful thanks to Coltrane. Jovan was badly injured though and Coltrane pushed him again on his identity. Before he died he confessed to being the man who Coltrane thought he was.

Watch the Strike Back: Vendetta episode 2 promo below:

In the second episode, Section 20 launches a raid on the Demachi family business in hopes of extracting the location of the bioweapon which leads them to an exchange between Edon and jihadist brothers Zayef and Mahir. While Mac considers a career-changing offer.

Strike Back: Vendetta episodes air at 9pm Tuesdays on Sky One. Preview the second episode with our gallery:

Advertisement. Scroll to continue reading.
In this article:Cinemax, Sky One, Sky Original, Strike Back