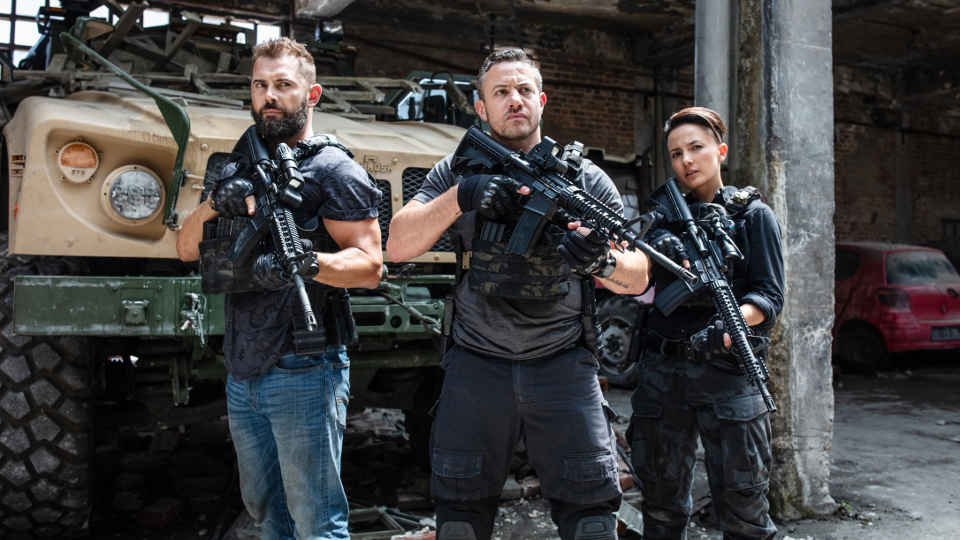 The season premiere of Strike Back: Vendetta (season 8) saw Section 20 deployed to Kosovo on a rescue mission.

The episode opened up with Colonel Alexander Coltrane (Jamie Bamber) gearing up the head back to the Balkands on orders from Deputy Head of the Special Intelligence Services Sir James Spencer (John Michie).

In Pristina, Kosovo, the Albanian Mafia were holding Dr Helen McCluskey (Lucy Russell) a British scientist. Section 20 arrived on the scene for a rescue mission. Lance Corporal Manisha Chetri (Varada Sethu) was running observations while the team approached in an armored vehicle. Chetri told them to expect significant resistance and blocked the enemy comms by playing opera music over their frequency. It disoriented them while Mac (Warren Brown) drove straight through the side of their building. It caught the enemy by surprise while Mac, Coltrane, Wyatt (Daniel MacPherson) and Novin (Alin Sumarwata) leapt out and began shooting.

With the enemy down, Coltrane ordered the team to search for the hostage and he and Mac found her. Mac freed her and said they were there to get her out but she hinted there was another reason. Coltrane stayed tight-lipped due to the classified nature of the mission. McCluskey was in a bad way and looked to have been badly beaten.

As they made their way out of the structure, Chetri picked up hostile chatter. Coltrane stopped to ask McCluskey if the package was secure. She said that it was not but it was in a secure lab facility. She hinted that she had given up the location and access intel to the Albanian Mafia. Coltrane pulled his pistol on the doctor so Mac blocked his line of sight. Coltrane said they had orders and Mac tried to change his mind before stepping aside. The doctor explained that she was wanted dead because she planned to blow the whistle and tell the truth.

Mac stepped aside and Coltrane readied to fire before hesitating and asking what the package actually was. The doctor explained that a few years previous, the British had found a strain of hemorrhagic fever, a weaponised virus, in a Kosovo lab. She was given the job of developing it and explained that it was the worst sought of biochemical weapon. Before a further decision could be made five armed Albanian Mafia arrived on scene.

A gunfight broke out between the Section 20 team and the attackers. One of the attackers, Jovan (Tomi May), made a call and was told to take the doctor out. The guy he spoke to, Edon (Goran Bogdan), said their plan to attack the lab would be brought forward. Jovan moved to an elevated position and used a sniper rifle to kill the doctor. He also managed a shot at Coltrane but missed. Chetri opened fire on Jovan’s position. Mac lobbed a smoke grenade which gave them enough cover to get back to their vehicle and escape.

Back at base, Chetri looked for info on McCluskey but turned up nothing as everything was classified. Coltrane demanded she find something so that they could track down the lab to secure the package. While he waited, Coltrane gave the team permission to speak. They were annoyed he had deceived them about the real purpose of the mission and he explained they were following orders. Mac wondered why they were now trying to track down the lab.

Chetri identified an address for the doctor and Coltrane ordered Novin and Wyatt to go and check it out. Coltrane went to make a call to Whitehall to see if they would give up any extra information. He also spoke to Mac and said he wanted to recommend him for officer training. However, he also warned him not to disobey his orders again or he’d be finished.

Wyatt and Novin arrived at the address where the doctor lived and found that the Albanian’s had beaten them to it. The whole place had been tossed. They took a look around anyway while talking about the earlier events. Behind a radiator, Wyatt discovered an ID card for the doctor under the name of Joyce Summers. It had her job title as a Biological Scientist working for Aletheia Labs. Before they could celebrate, Jovan burst in and began shooting. He shouted that he had a lot of time for soldiers before throwing a grenade. Wyatt and Novin managed to run out before it exploded and made their getaway. Jovan reported in that no one was at the house and stole some milk from a woman walking by before leaving the scene.

Novin reported in and Chetri plotted them a route to Aletheia Labs. Coltrane sent Mac to rendezvous with them and told him not to blow anything up. Meanwhile, Edon and his team began their assault on the lab. He made his way inside, took hostages and gained access to the lab but the code that McCluskey had given him to obtain the package was incorrect. When Wyatt and Novin arrived, Mac updated them saying they were facing 5 armed men and 15 hostages. His plan was to launch an assault with the hope of hitting the enemy hard and by surprise.

As Section 20 approached, one of the hostages was caught trying to raise the alarm via his mobile phone. Novin opened fire and the team quickly took down 3 of the enemy. Inside, Edon had shorted the access panel and obtained the package. As 20 made their way inside, Novin was forced to react and accidentally killed a female staff member. Wyatt took out the fourth enemy, leaving just Edon left who made his way to the roof. Mac tracked him down and they traded bullets. Before Mac could catch him, Edon rapelled down the side of the building to Jovan waiting in a vehicle below. They tried to escape but found their path blocked by Coltrane and Chetri who opened fire. Jovan took a bullet and exited the vehicle but Edon escaped. Coltrane seemed to recognise him.

Edon headed home and was confronted by his wife Arianna Demachi (Ivana Milicevic). She wanted to know what went wrong but he said it went well. She helped patch him up and asked after his “attack dog” Jovan. Edon explained Jovan was taken. Arianna suggested that Jovan might need to be put down.

Jovan was taken to Klimenti Hospital in Skopje, Macedonia and Mac stood guard. He reported to Coltrane that the doctors said Jovan wouldn’t wake for at least a few hours. Coltrane met again with Spencer and asked why the British were developing bioweapons. Spencer said he didn’t know and that it was way above his pay grade. However, he speculated it might have been justified as a biodefence deterrant. He explained that McCluskey had complete the Serbian’s work. He wanted 20 to recover the stolen weapon. Coltrane also said that he thought Jovan might be a man he recognised from the end of the Kosovo war. Spencer asked what facial recognition thought and Coltrane said it didn’t agree.

The team regrouped back at the hospital where Chetri updated them on the details she’d dug up on the Demachi family. Coltrane seemed particularly interested in knowing if they had the correct identity for Jovan and told her to make sure. Chetri managed to gain access to Jovan’s phone and identified an upcoming meet set for the next day in the San Marco district of Venice. Coltrane deployed the team and said he’d stay for when Jovan woke up.

The team arrived in Venice and begun their search for Edon. Things were made more difficult by some sort of festival where most people were in costume wearing masks. They reported in to Coltrane and asked if he could get more intel from Jovan. Coltrane woke him up with a shot of adrenaline and asked for intel on Venice. He also pushed him on the past and accused him of having facial reconstruction. To try and get him to speak, Coltrane pressed on his bullet wound causing him to scream. Jovan denied knowing anything of the past that Coltrane spoke of but offered intel on Venice in exchange for freedom.

Against his better judgement, Coltrane cut him free and Jovan gave the name of a hotel that would be used for the meet. He updated the team before Jovan attacked him. As the pair fought, a team arrived to kill Jovan. The first attacker put a couple of bullets in him before Coltrane killed him. As the other attackers closed in, Jovan asked Coltrane for help and said that he had more information on what was happening in Venice.

Back in Venice, the team raced to the meet location. Wyatt and Chetri took a vantage point close by and Chetri monitored the meet. Edon said he’d expected the organ grinder, not the monkey but the buyer said he spoke for Zayef. The buyer transferred an advance of €500,000 before asking about the sample. Edon gave him one of the containers he stole from Aletheia Labs. Wyatt had both men in his sights and asked for authorisation to take the shot. Mac said their orders were to observe and requested authorisation from Coltrane. However, Coltrane was busy trying to extract the wounded Jovan.

With Coltrane not answering Mac reluctantly gave the order to “Go loud”. Jovan told Coltrane that the buyers were getting a sample that they planned to test at the festival. Coltrane relayed the intel to Mac and Wyatt went to take his shot. He fired but the glass was bulletproof. The meeting broke up and Mac and Novin went after the two groups. Novin came up against Edon and his men while Mac was after the buyers with the virus sample.

Wyatt came to help Mac and they chased the guy with the virus. He grabbed a mask and they lost him in the crowd as he prepared to release the virus. Mac fired into the air in the hope everyone but the guy with the virus would scatter and it worked. Wyatt shot him in the leg and he dropped the container as he fell. It rolled along the floor but Mac managed to grab it and it remained intact. Wyatt killed the guy as he pulled a gun.

Novin spotted a man that she thought was the buyer and gave chase. She pulled her gun as he boarded a boat but had a flashback of killing the innocent female staff member at the lab and hesitated. The buyer got away.

Can’t wait for the next episode? Read our Strike Back: Vendetta episode 2 preview.