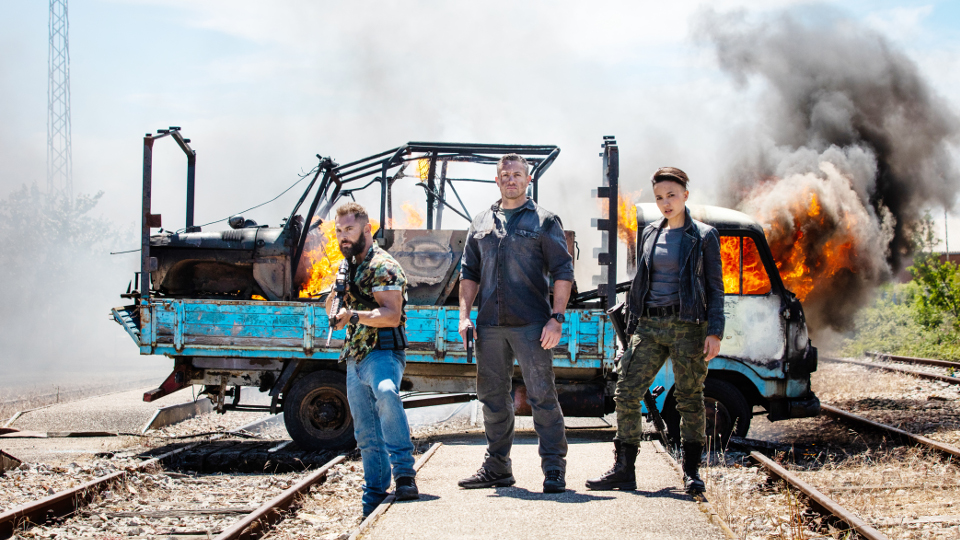 On the second episode of Strike Back: Vendetta (season 8), Mac (Warren Brown) considered a career-changing offer.

The episode opened up at the Demachi house with Arianna (Ivana Milicevic) going over their finances. She confronted her husband, Edon (Goran Bogdan), who was holding some kind of party that involved drugs and alcohol. He told her they owed 8 million but that the upcoming wedding of their son Loric (Maxim Baldry) to the Vironi family would wipe it out and then the bioweapon exchange would raise another 10 million.

Loric had become close to his bodyguard and he tried to sneak off with him while his parents talked. Edon noticed that they had gone and found the pair together in a state of undress. Edon made his son lie that he had been attacked and then he executed the bodyguard in front of everyone.

Nearby, Coltrane (Jamie Bamber) briefed the Section 20 team on intelligence and propaganda that pointed towards a man named Zayef (Alec Secareanu). His brother Mahir (Bamshad Abedi-Amin) tried to buy the bioweapon in the first episode. They decided they needed to go after the Demachi family as they were the ones who would be selling it. Chetri (Varada Sethu) had dug up information that suggested Loric could be the weak link. She pointed the team at businesses that he was in charge of – a meatpackers and a strip club.

Mac, Wyatt (Daniel MacPherson) and Novin (Alin Sumarwata) headed to the strip club to try and recruit Loric. He was there with his mother. Wyatt was responsible for getting into the security office while Mac and Novin went into the club. Wyatt knocked out the security guard then patched Chetri into the video feeds. Wyatt was interrupted by one of the strippers and ended up having sex with her. What he didn’t know is it was a distraction while she raised the alarm.

Meanwhile, Mac approached Loric and asked for his help. When security were alerted, Wyatt was taken to Arianna. A fight broke out and Mac and Novin joined in. Loric made a run for it so Wyatt gave chase. He followed Loric into the meatpackers and had to fight off several men. Mac and Novin caught up with him and then they split up to search for Loric. Wyatt came across some bags of money and decided to help himself. Novin found Loric and disarmed him before giving him a tracker. Loric agreed to help and said he’d be happy for them to hurt his father. The team left and Loric told his father they had asked for his help but he refused.

Back at the Demachi house, Mr Veroni had come to speak. He had heard about their troubles and called the wedding off. Mr Veroni pulled out a knuckleduster and proceeded to beat Edon in front of his wife and son. Arianna couldn’t watch so pulled out a gun and shot Mr Veroni dead. Edon pulled his gun and killed Mr Veroni’s bodyguard. Inside Edon told Arianna that she had killed them. She said Mr Veroni got what he deserved and said that everything could be fixed with money. Edon agreed said he would fix things.

Back at base, Coltrane asked Mac about his offer of promotion to officer. He said he needed to think about it some more but after teasing by Wyatt and Novin he said he would accept the offer.

Edon went with Loric to do the deal. Loric activated his tracker and stashed it under his car seat. Edon decided it was too dangerous for Loric and sent his son back home. Section 20 noticed the tracker had gone live and went after it.

The followed it to a train station and the team spread out. Mac came across a shifty looking man and went after him. He tried to jump out at Mac but Mac knocked him to the ground. Mac searched him and found he had a train ticket. Mac pushed the man for more information before leaving him zip-tied to a bench. Coltrane was the only one who managed to get on the train. Wyatt and Novin left in their vehicle to try and intercept the train. Mac and Chetri hijacked a small train and gave chase.

Coltrane was captured by Edon and the pair spoke. Coltrane said he would let Edon keep the money but needed to get the bioweapon back safe. Edon refused and sent Coltrane with one of his men to be killed. The man took him to the rear carriage and the pair fought. Coltrane was really struggling but Mac managed to catch the train and joined him. Coltrane knocked his attacker out the back of the train and he was killed.

Edon and Mahir did the deal which saw Mahir leave with the weapon while Edon got a back of cash. At least he thought he did, on closer inspection he found that most of the bag was filled with blank paper.

The train had to stop when some of Mahir and Zayef’s men held it up at gun point. They also placed a burning truck across the rail line. Their men began an assault on the train and killed many passengers. Section 20 began to fight back and evacuated as many as they could. Edon noticed that his bag of money also contained a bomb and Mahir detonated it after making his getaway. Edon managed to get out as well but Mac was left aboard. However he survived and pursued Edon on foot.

Mac followed Edon to a farm where the pair fought. Mac gave Edon a chance to do the right thing but he refused and it ended with Mac shooting him dead. Mac recovered Edon’s tracker and gave the co-ordinates to the team so they could go after the bioweapon.

They arrived at a warehouse and began an assault, killing many of Zayef and Mahir’s men. The terrorist pair decided to leave the bioweapon and fled. During the gunfight, the bioweapon became airborne and some of the terrorists became instantly infected. Novin managed to cause an explosion which incinerated the bioweapon making it safe.

At the end of the episode, Mac realised the man he caught at the train station was Zayef. Coltrane was worried about the whole situation and felt that something worse was on the way. At Edon’s funeral, Arianna declared a blood feud that would see the family fight until Section 20 were dead.

Can’t wait for the next episode? Read our Strike Back: Vendetta episode 3 preview.