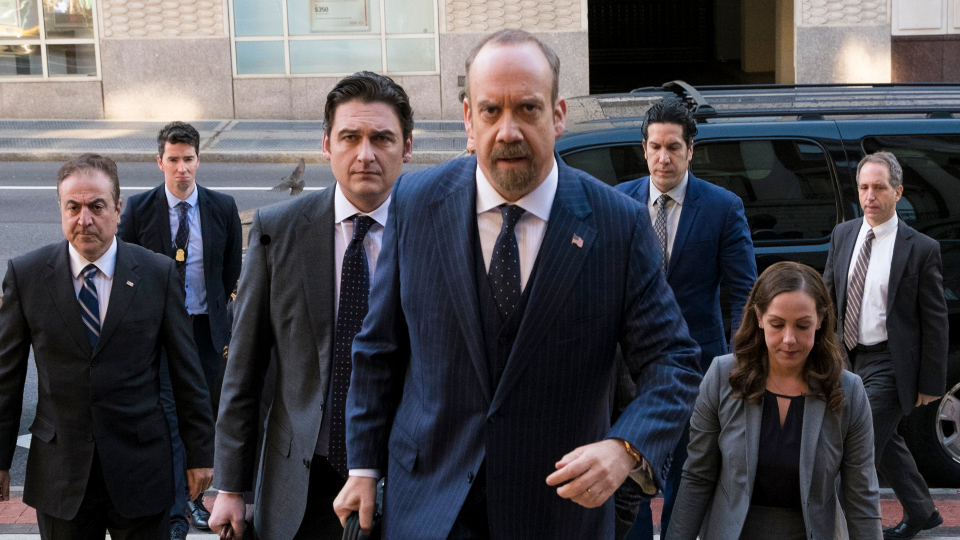 On the latest episode of Billions, things picked up for Chuck Rhoades (Paul Giamatti) while Bobby “Axe” Axelrod (Damien Lewis) was in for a frustrating time.

The episode began with Chuck Sr. (Jeffrey DeMunn) taking a call from ‘Black’ Jack Foley (David Strathairn). The call was for Foley to voice his disappointment about Chuck and to say that he’d decided to back Bob Sweeney (Matt Servitto) instead for Governor. He confirmed that it wasn’t a problem for the relationship with Chuck Sr. and looked forward to seeing him at a party he was throwing later.

Chuck Sr. met with his son and told him how Foley felt disrespected because Chuck hadn’t got his granddaughter a clerkship. He then told him that Foley was now backing Sweeney instead. Chuck felt confident he could resolve the situation himself.

Chuck paid a visit to Sweeney and made him an offer to be on his ticket. Sweeney refused so Chuck tried a different tactic and dug up some dirt on him. He discovered that he sent his son away for gay conversion therapy which forced him to drop out of the race.

Meanwhile at Axe Capital, they had gone ahead with seizing the assets of Sandicot and had taken their prized Remington statue and put it on display in the lobby. Axe wanted to know why Foley had screwed him over Sandicot and had tasked Wags (David Constabile) with finding out why. Wags had tried but was struggling to find out Foley’s reason. Axe was furious about the whole situation and demanded Wags make a face to face meeting with Foley happen.

Wags tried to arrange a meet with Foley but was refused. It just made Axe all the more suspicious so he decided to go after him. Wags tasked Taylor (Asia Kate Dillon) with finding out where Foley gets his metal ore. The plan is for Axe to outbid him and to hurt his business.

After finding Foley’s supplier Axe went to see him and made a ridiculous offer for the ore. He refused and wanted to stay loyal to Foley. Axe was shocked to find he was more scared of Foley than him and realised that Foley must wield a lot of power.

Now it was Axe’s turn to change tactic by making a large donation to a wildlife organisation. The donation came with the condition that they name Foley as their ‘Man of the Year’ so that he could present it to him. It worked and Foley granted him an audience.

The meeting was the same day as Foley’s party and before the meeting Axe spotted a familiar face. One of the catering staff was Danny Margolis (Daniel Cosgrave). The meeting with Foley was frustrating but Axe discovered that the Sandicot mess wasn’t a personal attack. Afterwards, Axe asked Margolis to see who attends the party in return for paying his house off.

Before Chuck headed out to Foley’s party, Wendy came home to look after the kids. She apologised for her reaction to the photo op with their son and Chuck confessed to going on a date. He explained that nothing happened more than a kiss and that he ended it. She kept her secret about sleeping with tech billionaire Craig Heidecker (James Wolk) and instead chose to tell Chuck that he looked hot in his tuxedo.

Elsewhere, Bryan (Toby Leonard Moore) and Sacher (Condola Rashad) decided to pursue former Axe Capital employees to see if they could get any dirt on Axe. Sacher discovered that since taking Wendy (Maggie Siff) back, that Dr. Gus had set up on his own but he had nothing for them. They next went after Steph (Shaunette Renée Wilson) and she said she would spill the beans under subpoena. Bryan asked Chuck but he said they should put it on the backburner for now.

At the party Ben Folds was there banging out some songs on piano. Foley and Chuck met and a promise of governor for Chuck was made. This news later turned into a celebration with Chuck Sr. at the Yale Club.

Margolis carried out his surveillance task and sent Axe pictures. Seeing one of Chuck and Chuck Sr. talking to Foley made Axe lose it. He went straight to the club and barged in looking for Chuck.

He soon found him and accused him of sabotaging his Sandicot deal. Chuck genuinely knew nothing of it but Axe went ballistic anyway. He boasted how he wasn’t going to lose a single dollar and was destroying the town to recoup his losses. Axe also told him that he needed his daddy to make his decisions.

Chuck was initially angry at his father but then realised what he had done for him. Axe’s actions were likely to be a good thing for him when going for votes. Chuck is definitely back on top for now.

Watch the Billions 2×09 trailer below:

The official synopsis for Billions 2×09 reads: