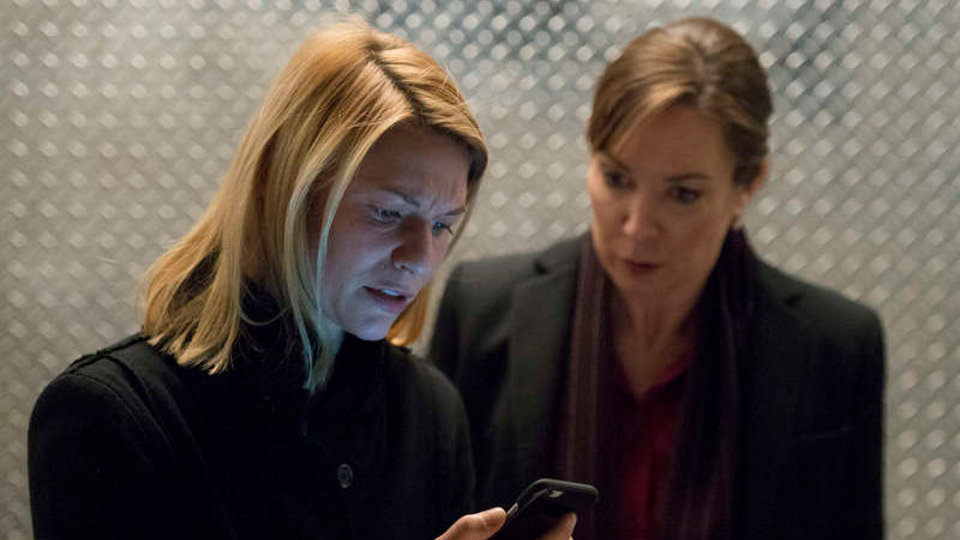 At the start of the episode, Dar Adal (F. Murray Abraham) paid a visit to a Senator that he had kidnapped. The Senator was chained up in a freezer in only his underwear. Dar wanted information on the conspiracy on Quinn (Rupert Friend) and used torture to get what he needed.

After surviving the bombing of the flag house, Carrie and Quinn headed off to make sure Keane was safe at her headquarters. Quinn surveyed outside and noted a large military presence while Carrie went in to see Keane.

Information came through about a bomb threat to the building and an evacuation was ordered. Before the cars left, Carrie spoke with Dar who gave her intel from the Senator. He said she needed to stop Keane leaving as an assassination attempt was underway and Quinn was to be framed.

Keane’s car waited momentarily for Carrie to make up her mind as the rest of the motorcade left. As Keane’s car was about to leave, a bomb was denotated outside destroying two of the cars and killing those inside.

Agent Thoms (James Mount) and Carrie retreated back into the building with Keane. Meanwhile, General McClendon (Robert Knepper) ordered his special ops team inside to kill Keane. Quinn followed them inside and tried to locate Carrie.

As Carrie and Keane made their way through the building, Agent Thoms lay in wait for the special ops team. His stood no chance and was executed. After heading upstairs, Carrie and Keane took refuge in a lift and went back down.

As they exited the lift, Quinn was waiting for them and ordered them into Keane’s car. He had Keane lay on the floor in the back with Carrie on top of her. He drove the car out of the parking garage just as the special ops team arrived.

Outside McClendon had ordered his soldiers to form a barricade and gave the orders to open fire. The car was riddled with bullets and several hit Quinn. He managed to keep the car going long enough to break through the barricade and get a safe distance away. Carrie and Keane survived unharmed but sadly Quinn’s injuries were too much and he died.

Six weeks later, Saul (Mandy Patinkin) went to see Dar in prison. Dar explained he felt his intentions were correct but that his plan had gone out of control. He also commented that something was off with Keane and he found her distinctly un-American.

Carrie was now working as a temporary liaison between the intelligence community and Keane. During a meeting with top officials they complained at the little communication they were receiving from Keane. Carrie promised everyone that it was temporary and their jobs were safe.

Later Keane offered Carrie a permanent position on her team as senior advisor to the President. This would come with her own office in the White House. Carrie explained that it would be the biggest honour of her career but needed time to consider how it would affect the situation with her daughter.

At a meeting with child services Carrie passed with flying colours and was a step closer to getting Franny back. Carrie asked if the job offer would cause a problem and was told it should be fine.

She later received a video call from Saul who showed her that he was in the process of being arrested. He appealed to her to help. Turning on the news she saw lots of reports of official being arrested. Keane was pulling in everyone with a connection to the assassination attempt.

At the end of the episode, Carrie rushed to see Keane but was blocked from accessing her office. She shouted through the door and Keane heard her but did nothing. Carrie was forcibly escorted from the building. The final scene showed Carrie looking across at the Capitol Building.

Homeland is expected to return in January 2018 for a seventh season.