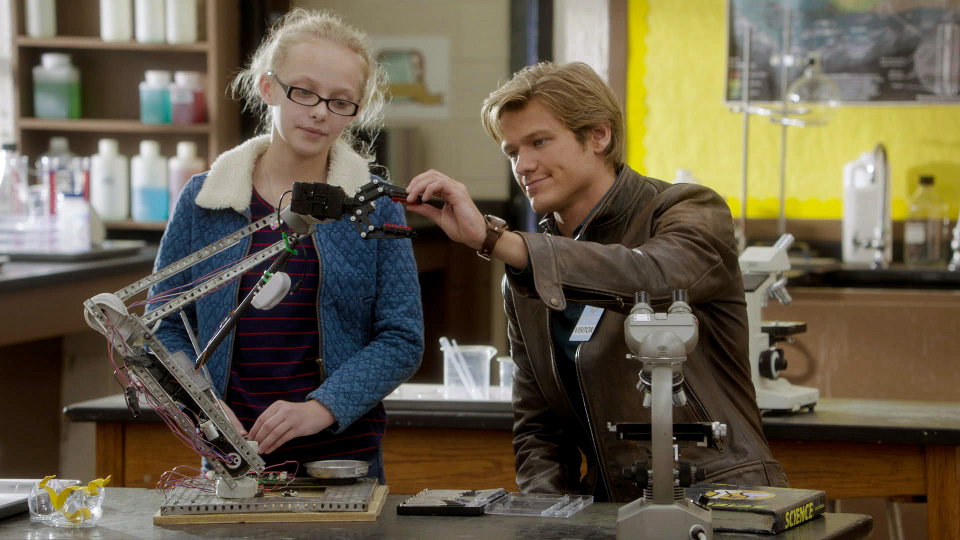 On the latest episode of MacGyver, Mac (Lucas Till) and the team headed to Latvia to try and capture the head of a terrorist organisation.

The episode opened up with Bozer (Justin Hires) being held in interrogation at the Phoenix Foundation. After he found out Mac’s true identity last episode he was now considered a threat to national security.

Mac wasn’t happy about the situation with his friend but Thornton (Sandrine Holt) refused to release him. Jack (George Eads) and Riley (Tristin Mays) talked about Bozer and wondered what might happen to him. Mac insisted he would resolve the situation.

Thornton briefed the team about a terrorist organisation and their leader Janis Lapa (Tobias Jelinek). The team headed out to Riga, Latvia to try and capture him as they had intel he would be at a specific bank to collect an inheritance.

Janis escaped so the team gave pursuit but soon found themselves engaged in a gun battle. Mac cobbled together some materials to create a firework and used it to distract Janis. While he was distracted he made his move and apprehended him. Jack checked his phone and realised that Janis had alerted his terrorist friends.

Mac and the team fled by car with Janis but were held up by a terrorist roadblock. They had no option by to flee on foot and hid in a back alley. With no time to call in satellite images Mac decided to make his own.

He acquired a wire coat hanger, foil, plastic bag and jellied fuel. He combined these and then added Jack’s smartphone. Lighting the fuel inflated the bag and made a mini hot air balloon.

Unfortunately this didn’t ensure their safety as the terrorists began to attack. The handful of marines on site returned fire while Mac and the team took shelter inside. The earliest backup could get there to support them was six hours so the team needed to hold the terrorists off until then.

Mac got to work on fortifying the Embassy with the help of the scared civilian staff. They placed doors against the windows and Mac used his physics knowledge to calculate how much paper would stop the bullets. They then placed boxes of paper against the windows to protect them.

As the marines ran out of ammo Mac realised he needed to bring them inside safely. He took the bulletproof jackets from the staff and taped them to two fire doors. He and Jack then used the reinforced doors as shields. They went outside, blocked the main gate with a truck and brought the marines back inside.

Eventually the terrorists breached the gate so Mac ordered everyone upstairs. Using cleaning supplies he was able to make a crude grenade launcher to keep the terrorists at bay a little longer. He then pulled in an aerial and hooked it up to a radio to listen in on the terrorists. He discovered that a new assault team were coming to help the terrorists.

With three hours left to survive Mac and Jack blocked off the routes through the building to funnel the terrorists. They then used washing up liquid to help move a really heavy safe. Using sugar and some chemicals Mac made a kind of exploding putty. The gunpowder from Jack’s last bullet became a fuse and igniting it blew the safe through the floor blocking the terrorists escape.

While the terrorists were trapped Mac and Jack evacuated the staff via ropes. They then captured the terrorists humvee and used that and some other vehicles to escape with Janis.

Elsewhere in the episode, Thornton continued to interrogate Bozer. She questioned him over his phone records and suspect purchases he had made. Bozer explained that they were linked to his film making hobby.

At the end of the episode, Mac offered Bozer a job with the Phoenix Foundation. They felt that his prosthetic skills could be useful in future operations.

The next episode is Pliers, the official synopsis for the episode reads:

Mac and the team have no time to reminisce while visiting Mac’s and Bozer’s hometown when they immediately start searching for a kidnapped prodigy from Mac’s old middle school, Valerie (Amiah Miller). With just pliers and speaker wire available, Mac works doggedly to rescue the young genius he has so much in common with.