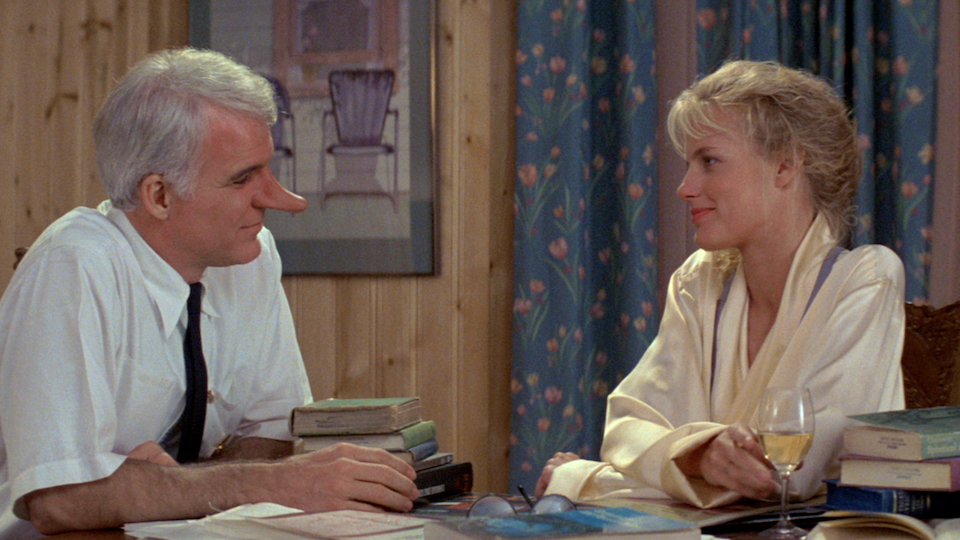 This beloved 1987 adaptation of Edmond Rostand’s Cyrano de Bergerac is a wonderfully old fashioned piece of filmmaking. Reminiscent of the golden era of Hollywood romance, there’s a touch of whimsical fantasy running through the film, thanks in no small part to Steve Martin’s excellent script, which lovingly updates the play for modern audiences.

Roxanne tells the story of C.D. “Charlie” Bates (Martin), a small town fire chief with an abnormally large nose. When the woman of his dreams moves to town – the Roxanne of the title, played by Daryl Hannah – Charlie is afraid to act on his feelings, as he is embarrassed about his nose.

Meanwhile, there’s a new fireman in town, in the shape of Chris (Rick Rossovich), a super handsome, strong silent type. Just like Charlie, he too falls in love with Roxanne. Everyone assumes based on his looks that he must be a ladykiller, when in fact nothing could be further from the truth. When he’s around beautiful women he is a clumsy, awkward, klutz, who has panic attacks and throws up.

With Charlie unable to declare his love, and Chris unable to string a sentence together, they unwittingly join forces to express their love to Roxanne. With Chris’s good looks acting as a vacuous mouthpiece, Charlie teaches him what to say to her, he writes letters for Chris to send to her, and in one inspired scene involving a radio earpiece and a hunting cap, he directly feeds lines for him to speak to her.

Daryl Hannah does a great job as the woman in the middle of all this. She is no desperado, looking to be defined by the love of a man. She is an astronomer who moved to a town in the mountains so she can track the course of a comet. That two men have fallen head over heels for her is just something she has to deal with.

Steve Martin is on spectacular form, as the eloquent, athletic and swashbuckling fire chief. Intelligent, poetic, funny, and good in a fight. There is no man in town who can match him. In the opening scene, he bests two would be assailants with nothing more than a tennis racket and his rapier wit. In the film’s most famous scene, a local buffoon calls him “big nose”, and he reels off twenty better insults to the delight of everyone in the bar. It is a classic moment that still stands up today.

It’s such a cliche, but who cares I’m going for it, they really don’t make ’em like this anymore! So effortlessly charming and lighthearted, and built on a fabulous script and winning performances from a wonderful cast. Roxanne is a terrific throwback to a less cynical time, when romantic comedies still managed to be both romantic and funny.