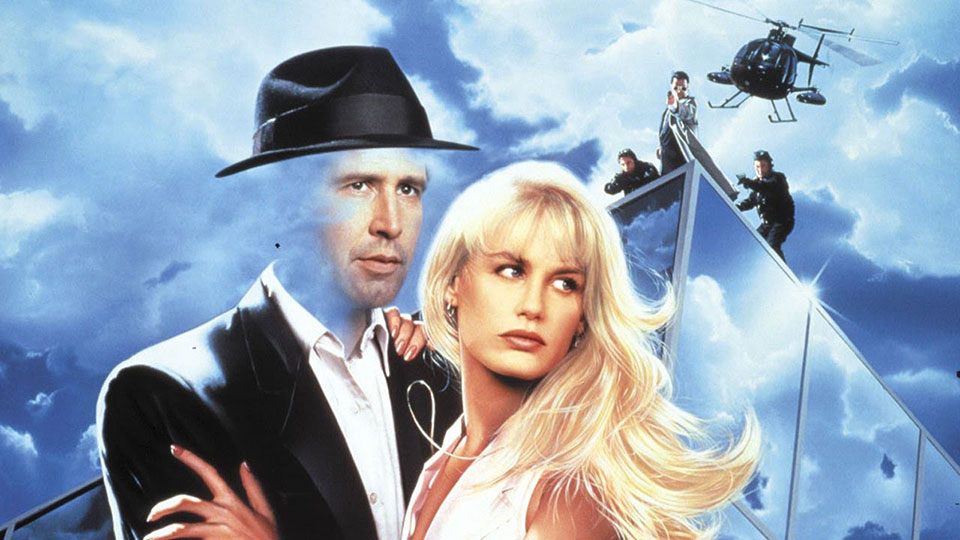 Stock analyst Nick Halloway (Chevy Chase) sneaks out of a shareholders’ meeting and decides to have a nap. While he’s asleep a lab technician spills his coffee onto a computer console causing panic and leading to the building being evacuated. Worried that the building has exploded, the CIA led by David Jenkins (Sam Neill) arrives and finds that parts of it are actually invisible. It’s also revealed that Nick has been turned invisible too and the CIA is determined to use him as a secret agent.

Memoirs of an Invisible Man was originally released in 1992 and it was directed by iconic film-maker John Carpenter. The film was a flop at the box office and critics at the time were quite damning of it. 26 years later, the film is looked at more fondly and Fabulous Films have re-issued it on DVD and Blu-ray. While it’s unlikely to ever be considered a classic, Memoirs of an Invisible Man does have a certain amount of charm. Yes the plot may be a little too conventional and predictable, but that doesn’t stop it being an enjoyable romp.

Chevy Chase was best-known for comedy prior to taking on the role of Nick Halloway but this marked a bit of a departure for him. While not playing completely straight, Chase is engaging and utilises his comedy skills well. He plays opposite Daryl Hannah who plays his love interest Alice Monroe. Her character is very poorly written so she doesn’t get a whole lot to do other than look beautiful and be a plot device the CIA uses against Nick.

Sam Neill is pretty unconvincing as CIA agent David Jenkins and he isn’t believably menacing. The film would have been a bit stronger had they cast someone more suitable for the villain role. You get the impression he did this for the pay check and he doesn’t do a very good job of disguising that sadly. Michael McKean (Better Call Saul) fares better as Nick’s friend and it’s a fun supporting role for him.

What you can’t take away from Memoirs of an Invisible Man is the impressive special effects. The film was one of the first to mix practical and CGI effects, and despite obviously being dated, they are still pretty impressive. There’s a scene where Alice puts make-up on Nick’s face so she can see him, and it holds up remarkably well.

The special features on the Blu-ray release include a series of outtakes, a trailer and a gallery. There’s also a featurette exploring the ground-breaking special effects titled How to Become Invisible: The Dawn of Digital FX.

Memoirs of an Invisible Man does what it’s supposed to. It’s never going to be remembered as one of the best movies ever made but it was never meant to be. This is pure unadulterated family fun and while there are plenty of flaws, the story is robust enough to sit back and enjoy. Add to that Chevy Chase’s solid central performance and the film is much better than previous critics would have you believe.