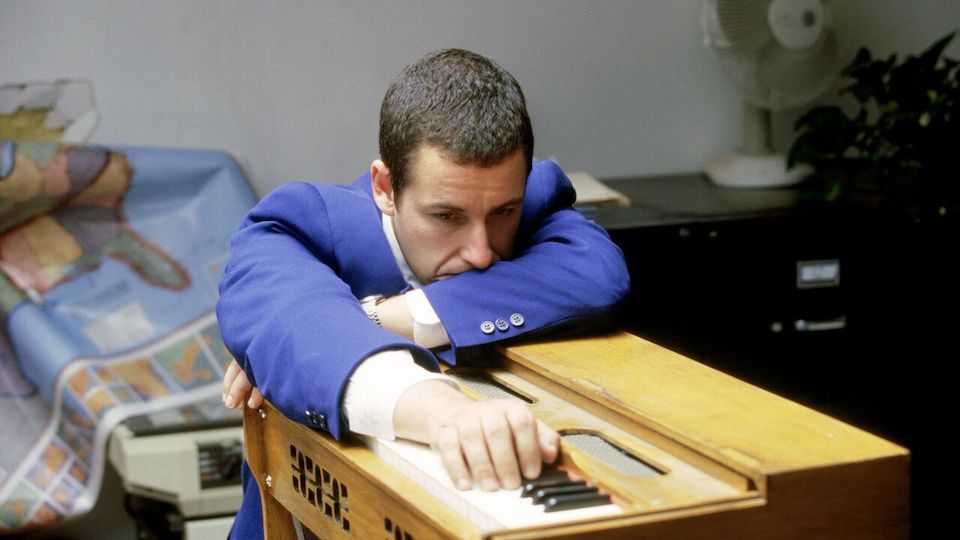 Having been propelled into the A-list with his sophomore smash hit, Boogie Nights, earning comparisons with Scorsese and Tarantino along the way, Paul Thomas Anderson cemented his status with Magnolia, a sprawling, inter-connected Altman-esque drama about love, fate, coincidence, and the human condition. At the Cannes Film Festival whilst promoting Magnolia, he was asked what his next project would. Anderson famously replied that his next film would be an Adam Sandler movie. Oh how the critical cognoscenti chuckled.

Three years later, Anderson would take the stage at Cannes and collect the best director award for his extraordinary Adam Sandler movie, Punch Drunk Love. At first glance, you might think it was a run of the mill indie rom-com about two oddballs finding love, but scratch the surface and there is a whole world of strange beauty packed into a lean 95 minute running time.

Sandler plays Barry Egan, a small time businessman, obsessed with collecting frequent-flyer-mile coupons from the packaging of Healthy Choice food. He is lonely and depressed, confessing to his brother in law, that he doesn’t like himself. There’s also a sense of something not quite right about Barry. There’s an edginess and creepiness that comes off him. Imagine if Travis Bickle had been born 30 years later, and had 7 sisters. That’s Barry Egan.

With everything spinning out of control, into Barry’s life comes the mysterious Lena (Emily Watson), and the two begin an awkward and passionate courtship. There’s a frenetic, nervous energy that every frame of Punch Drunk Love pulses with. This is in no small part thanks to Jon Brion’s incredible score. Off-kilter and endlessly surprising, it fuels the film with a unique sense of strangeness, befitting the offbeat jitteriness of the script, and Sandler’s sensational performance.

His work in this film is truly incredible. With only a few tweaks to his usual shtick, Anderson draws out a performance form Sandler that is as mesmerising as it is heartbreaking. Watching it again 14 years since its release, it is extremely frustrating that he chose to fill the intervening years making garbage. It is a performance filled with barely suppressed rage that occasionally boils over into violence. Whether it be smashing windows, destroying a rest room, or battering Hoffman’s goons after they injure Lena. His entire relationship with Lena walks a line of extreme love and extreme violence.

This lends a refreshing unpredictability to the film. Lena, with her intense eyes, and unconventional manner, is as much of an outsider as Barry. She is a co-worker of one of Barry’s sisters, and confesses to falling for him after seeing a photo of him. This doesn’t freak him out. He just calmly goes to the men’s room and smashes it to pieces. Watson, not your usual leading lady for an Adam Sandler film, is just fantastic, bringing a sort of otherworldly weirdness to Lena. I reckon if Travis Bickle had taken Lena out on a date instead of Betsy, things would have turned out a lot different.

Punch Drunk Love is a film of exquisite detail and thematic richness, which rewards multiple viewings. For this review, I watched the film for the first time since I had seen it in the cinema, and was astonished at the artistry on display. The gorgeous cinematography, the incredibly symbolic colour scheme, and of course, the iconic silhouette kiss – pure cinematic magic.

A couple of easter eggs to look out for: Barry’s knuckles after he punches the wall; and pay close attention to the scene in the supermarket. There’s something happening that completely changes the dynamic of the film.