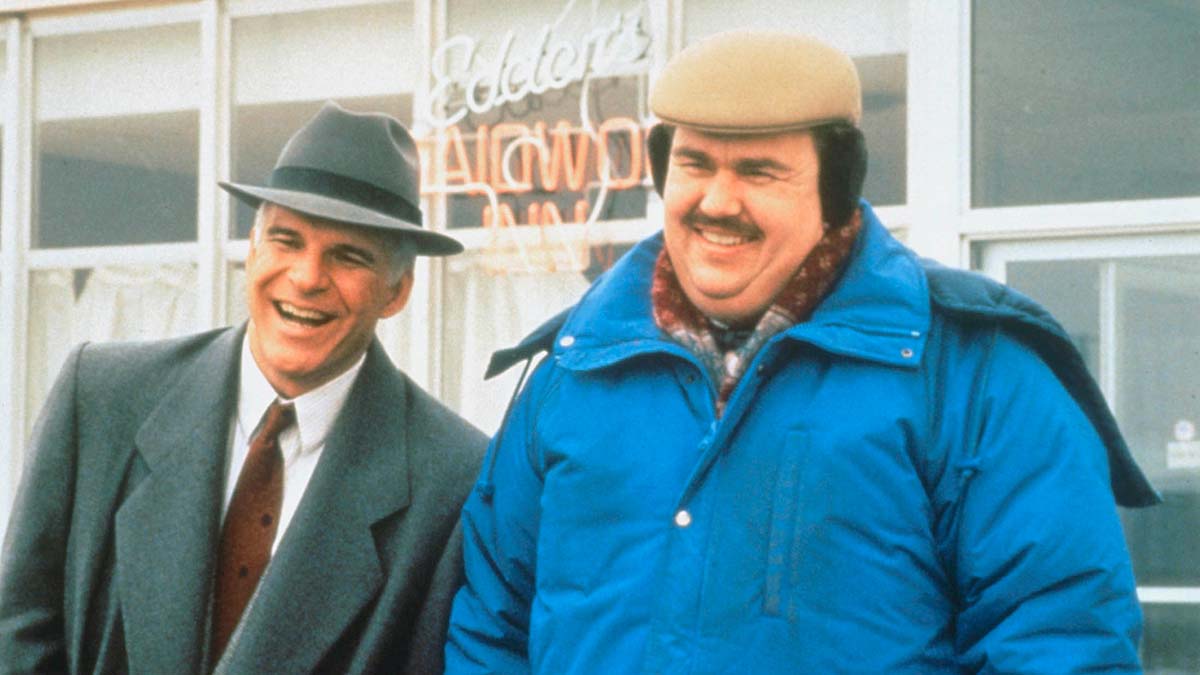 John Hughes’ feel-good 1987 comedy ‘Planes, Trains and Automobiles’ has arrived on 4K UHD. Its release coincides with Thanksgiving in the United States this week. The wintertime movie has been a firm favourite on both sides of the Atlantic ever since its original cinematic release.

We’ve all known what it’s like to be desperate to get home after work, only for the gods of transport to array against us. In that sense, we are all Steve Martin, who plays marketing executive Neal Page, a man desperate to be with his wife and kids in time for the Thanksgiving celebrations. What should be a straightforward journey from New York to Chicago turns out to be a living nightmare of delays, cancellations and frustrations. Neal must do battle with inconsiderate fellow-passengers, a shortage of taxicabs, flights grounded from snow and the vagaries of a chaotic but good-hearted travelling companion, salesman Del Griffith (John Candy). The fates have thrown all of the aforementioned his way. At rush hour, Neal tumbles into the road after tripping on Del’s suitcase and is almost crushed under the wheels of oncoming traffic. To add insult to injury, Del then takes his cab. This sets the tone for a series of unfortunate events that plague Neal, only for Del to keep turning up in his life, and in trying to help out, invariably courting disaster and making things far, far worse.

An uptight man at the best of times, and used to things going his way, the stress of an appalling journey brings out the worst in Neal, turning him into an unpleasant, irritable and often arrogant traveller. Conversely, Del is happy-go-lucky, taking life in his stride. The two are polar opposites, but where Del takes a shine to Neal, he’s blissfully unaware of just how much he is getting under his fellow traveller’s skin – until finally Neal explodes. The result is Steve Martin at his very best: a cruel but desperately funny diatribe directed at Del, which keeps cutting to Candy’s wounded and crestfallen face. You feel bad for laughing, but you can’t stop!

As well as the sensational two leads, ‘Planes, Trains and Automobiles also boasts some great cameo appearances by familiar actors. Kevin Bacon is the young businessman who races Neal for a taxicab before he makes it out of New York City. Dylan Baker proves what an excellent character actor he is with a fine comic turn as a hillbilly sent to provide our intrepid duo with a lift to the railway station. His attention to detail shows real craftsmanship.

I absolutely adored ‘Planes, Trains and Automobiles’ as a child. I remember squirming in embarrassment when Neal, at the end of his tether, directs a foul-mouthed rant at a car hire saleswoman. As something of an easily irritated and overly-neurotic traveller, perhaps I subliminally related to Neal from an early age. Watching it again as an adult, as I have done twice in recent years, the film is undiminished in my eyes. ‘Planes, Trains and Automobiles’ is a masterpiece of cinema, and a work of genius by the late, great John Hughes, whose string of hits captured the spirit of the 80s and 90s.

‘Planes, Trains and Automobiles’ is a hugely-successful buddy movie. The chemistry between Steve Martin and John Candy is superb throughout. It is satisfying that their characters are such polar opposites – Martin tightly-coiled and meticulous, Candy a laissez faire slob. But they both ensure that, even when the comedy touches on the slapstick (I’m thinking of driving the burnt-out car), the two leads are completely credible as rounded human beings. For that reason, it warms the heart to see each learning from one another. For all his annoyances, Del finally rubs off on Neal and teaches him to be a better, more tolerant version of himself.

Spending time in the company of these two great comic talents is a pure pleasure, but with a script this well-plotted and put-together, it makes for cinematic gold. You will laugh, you may well cry, but the big-hearted ‘Planes, Trains and Automobiles’ is sure to warm your cockles as delivers up a morality tale stuffed to the rafters with truth about the human condition. It is best enjoyed as a wintertime treat, as the movie is set in late November in snowy conditions. Apart from a bit of bad language, ‘Planes, Trains and Automobiles’ is generally accessible to the whole family, younger children excluded.

The sign of a good comedy movie is that it is eminently quotable. Everyone recognises, “Those aren’t pillows!” and there are a few other classic moments and lines of dialogue that have become part of the public consciousness. The only aspect of the movie I found unsatisfying is a musical score that has aged horribly, and which grates from time to time. It’s not enough to prevent me from awarding ‘Planes, Trains and Automobiles’ with the full five stars. It looks more stunning than ever on 4K UHD, which brings the best out of the snowy landscapes.

For those who enjoy extra features, this new edition is replete with them. A second Blu-ray ‘lost luggage’ disc includes never before seen deleted and extended scenes that aficionados will want to check out. They were recently discovered in John Hughes’ archive. You can also see Dylan Baker’s original audition. The 4K UHD disc contains the featurette ‘Getting There is Half the Fun: The Story of Planes, Trains and Automobiles’, as well as fitting tributes to the extraordinary legacies of John Hughes and John Candy.