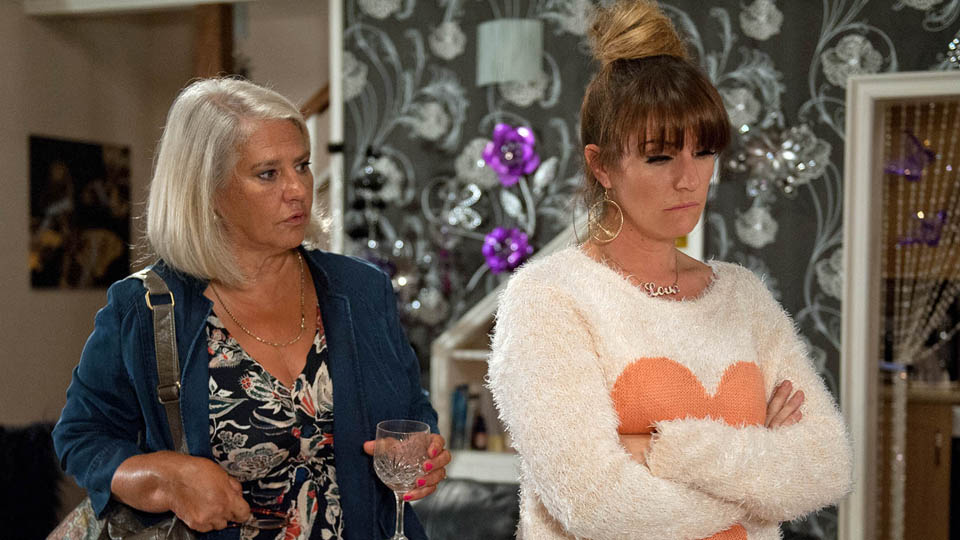 Welcome to our handy guide to what’s going to happen in Emmerdale this week.  Kerry has some shocking news, Cain returns and Nicola is on to Jimmy.

Kerry panics when she feels nauseous and forces herself to do a pregnancy test;  it’s positive.  As she debates whether or not to tell Dan, she’s interrupted and can’t go through with it knowing that she slept with Ross.  She confides in Joanie and says she needs to have an abortion pronto, despite Joanie trying to persuade her otherwise.

Kerry visits the clinic for an obligatory counselling session and is rattled when she is told she must wait to get a scan before she can have a termination.  As she struggles to hide her secret, will Dan suss what’s going on?

Cain’s back and wants Charity

It hasn’t taken long but Charity is bored with being a landlady.  It looks like she’s missing the thrill of pulling off dodgy jobs and is soon cosying up to Ross to plan another scam, this time it’s stealing a dog.  As the plan goes wrong they are trapped by an angry Rottweiler and Charity reveals plans to leave the village and Ross is furious that she’ll be taking Moses with her.

Later, Ross moves in for a kiss and Charity responds, only pulling away when a police car turns up with Cain and Ross is annoyed at how quickly Charity has dropped him now Cain’s back on the scene.  She tells Cain her and Ross are an item now to wind him up and it looks like it’s worked when he later kisses her passionately.

Chas figures out that the pair are back together and begs Diane to come with her to let Moira know before she hears it through the grapevine, but it may already be too late as Cain seems to want to tell the world and a gossiping Brenda might be just the key.  As Adam lets slip Cain is back with Charity but Moira barely reacts as her mind is on far bigger concerns…

Rhona and Pierce are alarmed to return from holiday and find that Paddy is still in the village.  Paddy assures Rhona he’s moving on and even suggests they start divorce proceedings leaving Pierce somewhat surprised that Paddy’s taken the initiative.

Megan and Frank have spent the night together and he insists on treating her to lunch later.  Megan couldn’t be happier until she learns that he’s an ex-con.  Is this romance over before it’s begun or will Megan give him a chance?

Jai and Holly’s romance gets serious as the pair have a picnic and Jai suggests they tell people about them being a couple now.   Is Holly ready for that?

Nicola is jealous when she sees Lydia squeeze Jimmy’s shoulder and gets suspicious when Jimmy tries to stop her going to toddler group with him and secretly follows him.  At the village hall she sees what’s going on and much to Jimmy’s surprise she joins the group…