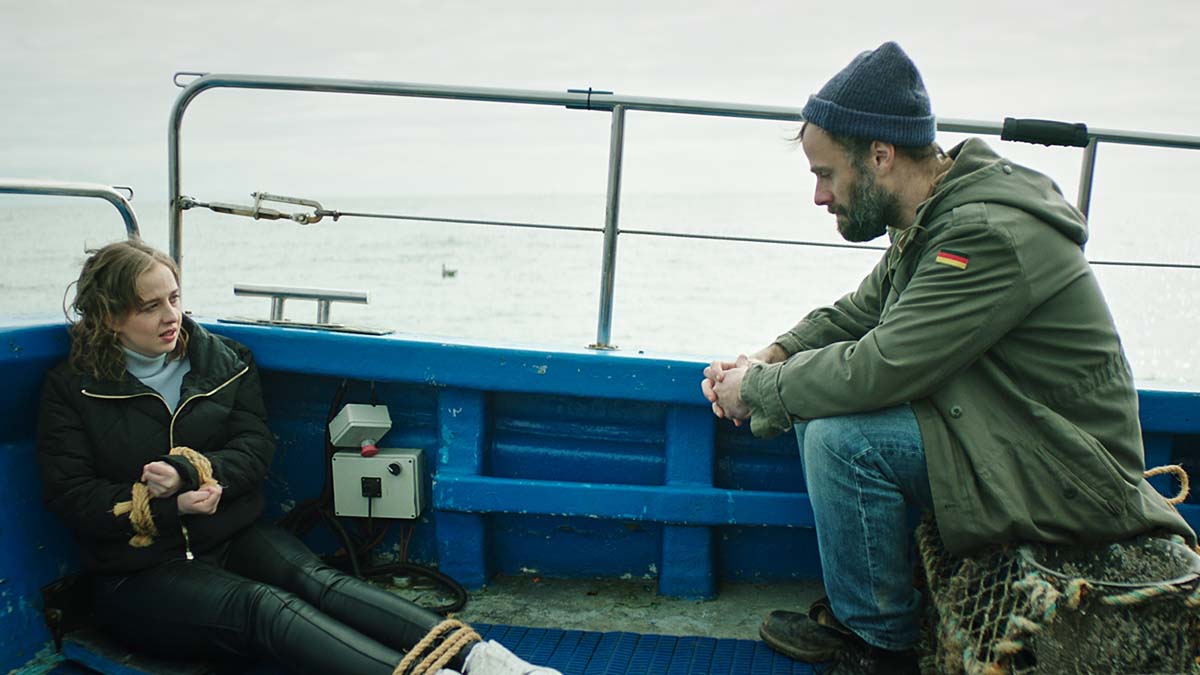 As a young girl Evie (Holli Dempsey) became obsessed with the myths and the legends of the sea after finding a necklace on the beach. As her behaviour spiralled out of control, her parents Jen (Joanne Mitchell) and Gil (Liam McMahon) struggled to cope while her brother Tony (Jay Taylor) was sidelined. Fast-forward two decades and Evie is estranged from her family after she and Tony were given up for adoption, and rehomed with separate families, following a tragedy. Now a mess and an alcoholic, Evie is surprised when Tony reaches out to in a bid to rebuild their relationship. As Evie returns to the family home, old tensions rise and history begins to rear its ugly head.

‘Evie’ is an independent British film from co-directors Dominic Brunt and Jamie Lundy, based on the very personal story of Lundy’s battle with alcoholism before getting sober. Brunt has written the screenplay based on Lundy’s original story, and together they’ve crafted a stark exploration of family ties with a hint of the supernatural. The events from Evie’s past have led her to become an adult mess, lacking any sense of responsibility for herself and reaching for alcohol at every opportunity. We see her in a mind-numbing job with an insurance company before she goes on yet another date where she consumes far too much booze and falls into bed with her one-night suitor.

Interestingly, Evie isn’t unaware of how much of a mess she is but she’s in no rush to change her behaviour. Once Tony reaches out, she’s forced to address the history that led her to where she is in life now. While Evie struggled in the foster system, Tony had a charmed life contrasting the formative years of the siblings. Their reunion is uneasy with unspoken anger between the two very clear, and it’s this part of the story that gets the most focus. Watching Evie and Tony readjust to one another is interesting, and putting them both back in the home where their last memories were that of tragedy, makes the situation even harder.

The film builds to a climax that is a serious shift in gear but it does tie the story together nicely, giving a satisfying ending. I would have liked Brunt and Lundy to explore more of the supernatural element of the story though. I understand it was used as a metaphor for Evie’s addiction but a little more weaving of it throughout the film, rather than keeping it to the end, may have helped break up the heavy drama between the siblings.

Holli Dempsey and Jay Taylor are absolutely superb as Evie and Tony. Dempsey manages to make Evie sympathetic, even though the audience knows the character is seriously flawed, while Taylor brings a world-weary slant to Tony, establishing him as a man who, like his sister, has struggled thanks to his tragic past. The scenes between the two actors are the best in the film as they try to navigate a new relationship while unable to forget how they treated one another while growing up.

‘Evie’ is certainly an interesting human drama and thanks to its strong leads, and the direction of Brunt and Lundy, it remains engaging even when it gets a little dialogue heavy. Personally, I would have liked the supernatural element to have played a larger and more impactful role in the film, but I did feel satisfied with how the film ended. Not everything is tied up nice and neatly so it’ll leave you with plenty of questions, and like me you’ll find yourself thinking about it once you leave the cinemas.