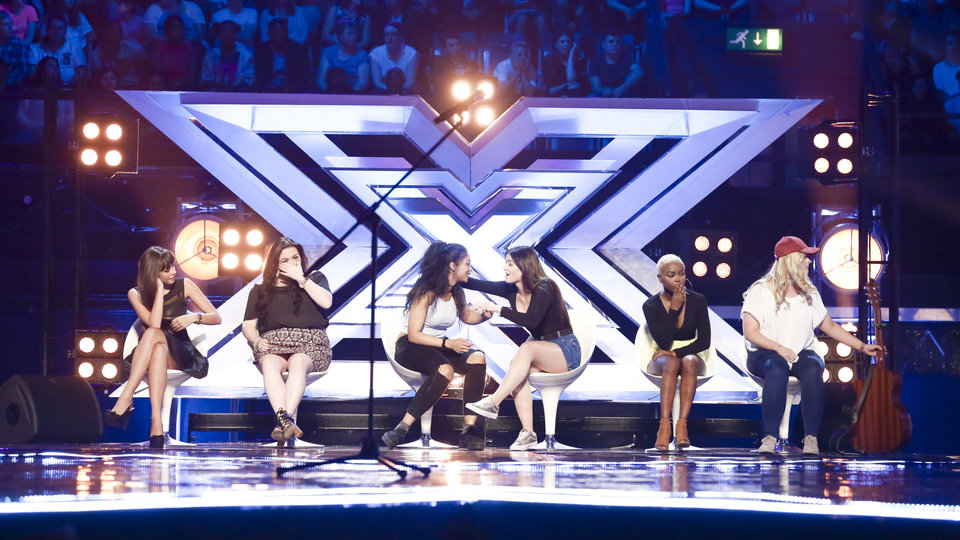 Tonight the six chairs challenge was back with a vengeance! The contestants had to sing their hearts out in order to win a seat on the notorious six chairs. This weekend it was time for Nicole Scherzinger to pick her 6 boys, whilst Simon had to pick the 6 girls that would go out to the judges houses in order to battle for a place on the live shows.

The contestants have gone through the auditions and bootcamp but now have one more challenge to face before going to the judges houses.

Shoeila Clifford was up first and performed Ellie Goulding’s Love Me Like You Do. Her delivery was great and Shoeila can definitely sing. Her hunger for the win is exciting. Louis said that she deserved a seat, Sharon thought she raised the level, Nicole thought that she was very brave. Simon gave her the first seat. Next up was Welsh born Kayleigh Marie Morgan who belted out an emotional version of Somewhere Over The Rainbow. The vocals were on point and the song showed her wide range. Nicole said that was how its done, Simon thought that she should have sang something more adventurous but nevertheless gave her a seat.

Hoping to get a chair was Luena Martinez singing the beautiful ballad, Run. Luena did a great job and looked amazing on stage. She did go a little overboard with a really high pitched vocal at the end but still she managed to get given a seat. Faye Horne was up next and boy can that woman sing. Her vocals were amazing and Simon thought the performance was a 10. She too got a seat.

Samantha Lavery decided to impress Simon with a sexy performance. She looked like a real popstar and her tone of voice is really beautiful to listen to. Louis said that she had great stage presence. Sharon liked the performance but not her song choice. Simon thought she was over-styled and sang a terrible song but still thought she was one of the stronger contestants and gave her the fifth chair.

Caitlyn Vanbeck sang one of Simon’s favourite songs, Rise Up. Caitlyn also sounded great and her performance felt heartfelt. Her vocals were great. She was one of my favourite contestants tonight. Louis said she was his favourite so far and that she was born to sing. Sharon loved it and said she was real, which she loves. Nicole thanked her for that performance and Simon said she didn’t know how good she is. She got the final sixth seat.

Hoping to kick someone out of their seat was Jordina Miller singing Amazing Grace from the heart. Her vocals were brilliant and she oozed confidence with her performance. You could tell Jordina really wanted it. Simon said she was far from perfect but he liked her ambition and determination. Simon decided to giver her a seat, which meant Faye Horne to lose hers.

Ellie Rose was up next and wanted to impress Simon with her vocals. The young contestant was very confident but Simon thought she could have done better and didn’t give her a chair.  Gifty Louise’s performance was explosive tonight. Her stripped down version of Crazy was brilliant and she looked comfortable as ever singing in front of the judges. Louis said that it was incredible, Sharon said she was the gift and that everybody loved her. Ultimately Simon had the final say and he decided to give her Samantha Lavery’s seat.

Trying to get a seat was Emily Middlemas singing an original version of Girls Just Want To Have Fun. Emily was absolutely brilliant. She might not be the strongest singer of the competition but her apparent talent is a recipe for success. She was another favourite of tonight’s show. Louis said it was brilliant and that she was refined, Nicole said that it was really good. Simon thought it was one of the best performances of the day and had a tough decision to make and chose to give her Jordina Miller’s chair. The last girl to sing was sixteen year old Olivia Garcia who sang Paloma Faith’s Change. Incredibly Olivia looks more mature and comfortable on stage than some of the older contestants of the competition. Her performance tonight was full confidence and her vocals topped it all. Louis thought it was flawless and Sharon also loved her. Simon thought her performance deserved a chair and gave her Luena Martinez’.

And the girls going to Simon’s house to battle to go onto the live shows are:

It was time for the boys next and trying to win a seat first was Mike Hough. His performance of Whitney Houston’s I Have Nothing failed to impress the judges and all felt disappointed with the performance. Nicole challenged Mike to sing acapella and it paid off as Mike got a seat. Will Rush decided to perform one of his own songs that he’d written during his time at bootcamp. His performance was really energetic but failed to impress Simon or Nicole who didn’t give him a chair.

Performing a Tina Turner’s Proud May song was James Hughes who finally raised the bar for the boys. His performance was rediculously fun and his vocals never faulted. This is one of the contestants to watch for this season for sure.  Louis thought he was a great entertainer and deserved a seat, Sharon wasn’t in Scotland and didn’t see James’ audition and was blown away by his performance. Simon also thought he deserved a chair. Nicole gave him a well deserved chair.

Next up was Niall Sexton who decided to sing the heartbreaking ballad Next One to impress Nicole. His performance was powerful and he looked really good on stage. Simon thought he had an incredible voice and Nicole loved his version of the song and gave him a chair. Conor McGinty tried to impress the judges with his version of Every Breaking Wave and his voice really shone but the song was boring. Simon said he liked him but not the song choice, Nicole thought it was his best performance so far and gave him the fourth chair.

Heartthrob, Matt Terry decided to sing one of Bruno Mars’ When I Was Your Man but Nicole stopped him because she thought the song wasn’t right for him. Matt didn’t let that dishearten him and performed a low key version of the song, which worked better. Simon thought that the performance was rushed and Nicole thought he should have been better. She gave him a the fifth chair nevertheless. Singing Take Me Home was Luca Valenti, who performed beautifully. I loved his voice. This was one of the best male performances of the night. Louis said it was fantastic and Nicole said he had to get a chair. This meant that all six chairs were full.

Freddy Parker decided to perform How Deep Is Your Love and hoped to get a chair. His performance didn’t wow the judges who asked him to play on the piano instead. His second performance was much better. Simon thought the second song was better. Nicole gave him Conor McGinty’s chair. The crowd was livid. Hoping to get a seat was singing teacher Nate Simpson who picked Run as his winning ticket. His performance was flawless. The vocals were so beautiful they nearly broke my heart. This was one of the most heartfelt performances of the show. Sharon said it was spectacular, Simon said it was the best performance of the boys tonight. Nicole had to give him a chair, which mean that Mike Hough had to give up his chair.

The last contestant performing for a seat was Christian Burrows. He sang Feeling Good and straight away the contestants were worried. His vocals were a bit pitchy to begin with but he stepped up halfway through and made song his own. His rap was original and his performance was rediculously good. He is by far one of my favourite contestants this year. Sharon was blown away, Simon said it was the most passionate performance on the category. Nicole had to make a decision and it wasn’t going to be easy.

Nicole decided to do things differently and made Matt sing again for his chair. This was a hard watch for the contestants and Christian watched with despair but then Nicole told him he would also have a chair. The boys were both ecstatic. This meant that Luca Valenti had to lose his place on the chairs.

The final six boys are: