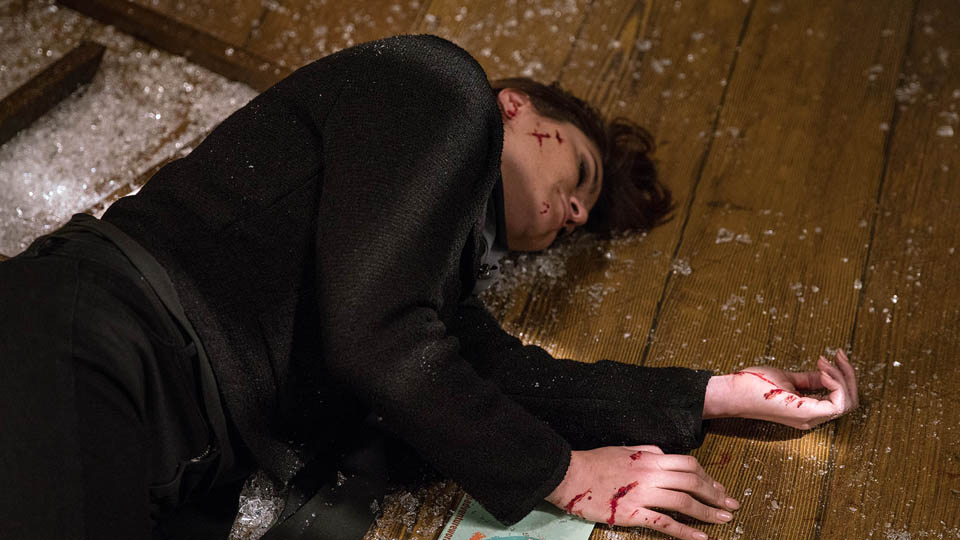 Welcome to our weekly look ahead to what’s happening in the Nation’s favourite Serial Drama (NTA winner!).

Lawrence and Rebecca rally round Chrissie with the former giving her, her mum’s wedding ring.  Rebecca plans to get it engraved as a surprise for Chrissie and is distraught when she realises she’s lost it!

Matters are made worse when Chrissie returns from court blaming Rebecca for Lachlan being kept inside.  Defeated, Rebecca announces she’s going to leave the village, but then she spies the missing ring on a chain around Chrissie’s neck; it wasn’t lost at all, it was stolen by Chrissie.  Rebecca makes a grab for the ring and soon the sisters are fighting until Chrissie falls over the bannister onto a glass table below.

With her sister in hospital, Rebecca heads to the Young Offenders Centre to visit Lachlan, but what is she up to?

Moira is fuming when she learns that Ross has been keeping a stolen car in her barn but calms when she understands why he’s doing it.  Later, after a poor meeting with client Patrick, she sees an opportunity for revenge; she steals his car!  Ross is impressed and she’s soon asking him to sell it.

It seems the meeting hadn’t gone as badly as Moira thought as Patrick offers her another meeting and the contract.  At the meeting he reveals that when his car was stolen it contained an urn of ashes, sending Moira into a mad rush to try to get to the car before Ross sells it.  Is it too late?

Frank is intrigued by Charity

Frank takes an interest in Charity, despite going back to Megan’s place.  It seems like it’s not just men that Megan will have to compete with Charity on when she turns down the Woolpack as a suggested party venue; Charity gets scheming.

Megan is soon forced to eat humble pie when her hen do venue has a problem and she has to ask Charity and Chas to use the woolie after all.  Which side will Frank fall on when he overhears something he shouldn’t at the Hen do?

As Kerry and Kyle prepare to welcome home Joanie from prison there’s a shocking turn of events.  As Zak, Lisa, Kerry and Dan struggle to talk to Kyle, Cain arrives and breaks the news about Joanie to his son.  It looks like Cain could be mending bridges with Kyle when he’s interrupted by a call from social services.

Doug makes Tracy feel self-conscious that she doesn’t read enough so she decides to start a book club, but will she find any book enthusiasts to join?

Meanwhile, Doug is on the receiving end of a prank as Gabby and Noah keep putting rude notes in Doug’s honesty box.  Will he find out they are behind them?

The Dingles rally around Debbie as she gets more bad news.