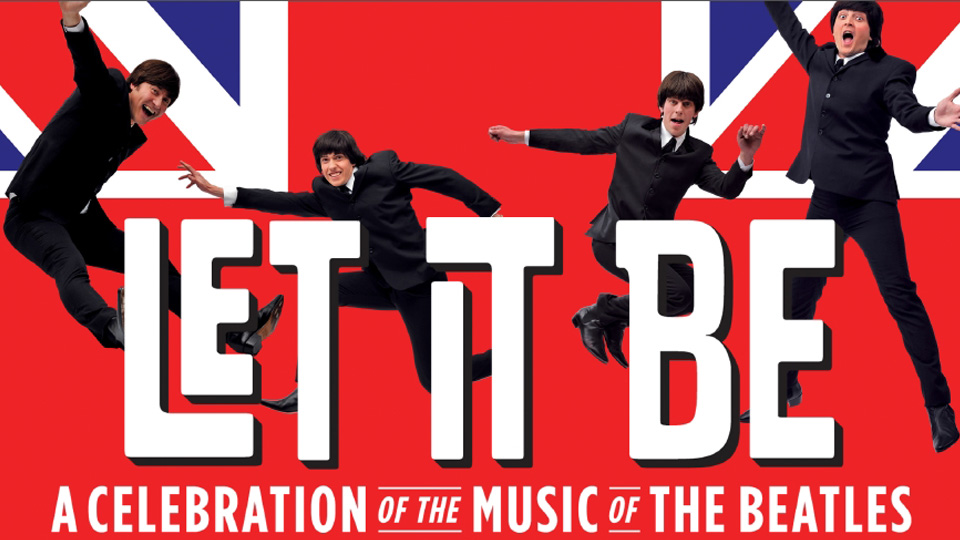 Celebrating the music of The Beatles, Let It Be pulls into Leeds Grand Theatre this month. Tracing the beginnings of the Fab Four in Liverpool’s Cavern Club to huge stadiums in the USA and beyond, the concert musical offers a host of classic hits from the band which helped shape popular music and defined a generation.

Let It Be tells the story of The Beatles through the songs which made the band a global phenomenon. Rattling through musical numbers at a breathless pace, the show covers a decade of hits in just over two hours, occasionally trimming numbers to provide a wealth of coverage.

The Beatles’ first hits remain classics of the early Sixties, establishing the invention of the teenager and all the romance and playfulness which Rock ‘n Roll opened up to a generation. The numbers remain fresh and uplifting under the musical direction of John Maher, with meticulously authentic sound and instrumentation. Early numbers such as I Want To Hold Your Hand and She Loves You, quickly establish the popular youth sound of the period, with punchy electric guitars, arresting drums and poppy, vibrant vocals.

The vast majority of modern audiences will know The Beatles’ music through radio play and albums. As such, Let It Be’s players have the unenviable challenge of recreating The Beatles’ unique studio sound in a live arena, which instantly invites comparison. The show manages to capture the nuances and inflections of the music down to the characters behind the ensemble; Lennon is purposefully nasal, Harrison deliciously droll, McCartney is relentlessly upbeat and Ringo is quizzical (and quite rightly) a tad flat.

The principals recreate a zany banter and warm likeability, establishing the Fab Four as real personalities on stage. The audience is directly addressed with fitful quips and requests to clap, scream and stomp. Whilst dancing in the aisles isn’t everybody’s idea of musical theatre, Let It Be successfully brings spectacle and engagement to its venue by pulling its audience on board for the ride.

As the show reaches the experimental and progressive orchestration of Sgt Pepper and Magical Mystery Tour, Let It Be scores highly in authenticity, with a playful stage presence from a maturing band which feels wholly naturalistic and impulsive. Dramatic interludes are dispensed with, allowing music and live performance to carry the show and tell its own tale. It’s just as a gig should be; seemingly informal and fun, concealing any of the theatrical mechanics to bring the façade to life.

An acoustic set showcases the talents of the cast with a subdued intimacy, providing a welcome interlude to the spectacle. Featuring elegant renditions of Blackbird and Here Comes The Sun, the unplugged set is a potent demonstration of the incredible writing skills of Lennon, McCartney and Harrison. A grand showstopper follows, featuring epic numbers from Abbey Road, which is progressive, bold and bravura. Irresistibly, Let It Be and Hey Jude close the concert with a sombre warmth, performed by a band which has visibly mellowed by the closure of the Sixties.

A sense of space, place and time permeates the production. Scenes in the Cavern club are smoky and suitably claustrophobic, whilst Sgt Pepper’s Lonely Hearts Club Band and Lucy In The Sky With Diamonds excel with an orchestral breadth against a kaleidoscopic light show. The production is beautifully staged with an innovative and engaging use of projection, echoing much of the stylized animation from George Dunning’s Yellow Submarine animation. Costumes are also meticulously researched, whilst hairstyles subtly evolve and important details abound, such as Paul McCartney’s infamous barefooting during the Abbey Road sequence.

Let It Be is a show as much about the Sixties as it is The Beatles, evoking memories of the Apollo moon landings, James Bond, Vietnam, Capstan Full Strength cigarettes and more besides. It faithfully resurrects the excitement of a decade of flamboyance and freedom. A theatrical concert, an immersive gig, a time-travelling journey; Let It Be is a musical odyssey which successfully recaptures the essence of a unique era.