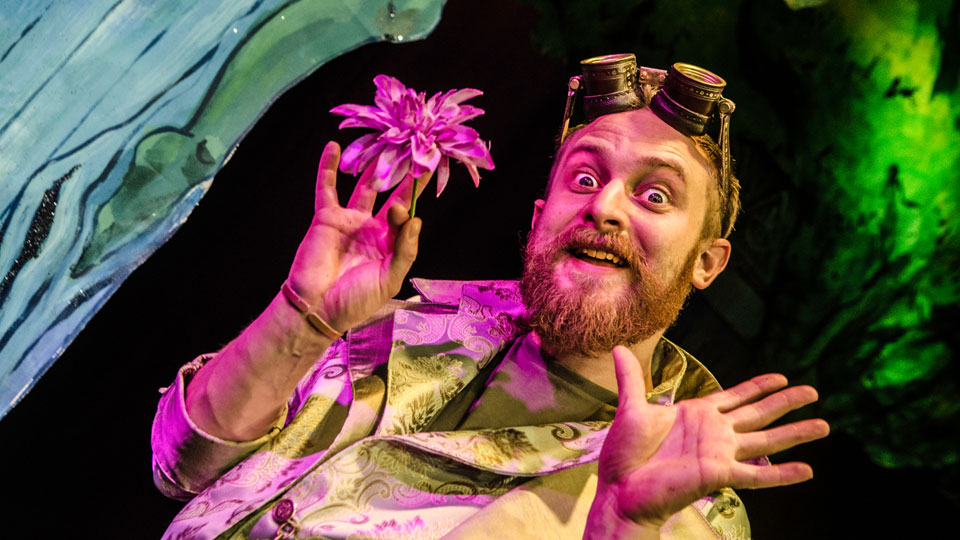 When you explain the concept of Shit-Faced Shakespeare to someone, their face lights up for a second. ‘An ordinary Shakespeare play but with one shit-faced cast member’ – it’s amusing. My worry going in was that it really would be ‘a second’ and that the novelty of watching someone slur their way through A Midsummer Night’s Dream would wear off pretty quickly.

Thankfully, this is not the case. From the moment you work out which cast member is that night’s designated drunkard (and it doesn’t take long…), the ‘Magnificent Bastard’ crew find the part of every audience member that makes them laugh and slowly tickle it until the strict 70-minute egg timer marks the well-timed conclusion. Any longer and perhaps it may become stale, but they have definitely found the sweet spot.

But the longevity of the joke can’t really be put down just to the relatively short run time. It’s more that for a performance which is defined by its own pandemonium, Shit-Faced Shakespeare is actually very well-structured. By no means am I implying that the cast member doesn’t get pissed (we actually saw our drunkard, Saul Marron, down one of his pints on stage), but I do suspect that the chaos is at least partly planned. This is not a bad thing – it means that certain humorous shenanigans are all guaranteed to happen for our amusement.

One of the main reasons I suspect that SFS is at least partly scripted is that the rest of the cast are so quick to respond to what goes on, advancing the drama in intelligent ways. It was for this reason that Briony Rawle (Hermia) was the standout performance for me – she never once broke from her character, and always reacted to the lunacy as if she was genuinely confused as to why Demetrius was acting so strangely. The showing I saw was actually Leanna Wigginton’s debut as Helena, who was also successful at this in-world improvising. I would have liked to have seen this determination not to corpse consistently across the whole cast, but it must be incredibly hard to keep a straight face, regardless of whether or not you have a good idea of what is about to happen.

The play acts as an excellent entry to the non-Shakespeare goer. Amazingly, despite the disarray, you don’t need to know the plot of Midsummer Night’s Dream to keep up with what’s going on – the performance cuts straight through to the core of the story. David Ellis played Puck in the performance I saw and did an excellent job of making the script accessible, with lines such as: “which is Shakespeare for fuck my life”. Without the booze this production would still have held its own with a humorous and contemporary charm.

The participation levels are through the roof. It’s essentially panto for adults, with members of the audience holding the power to decide when the drunkard should take their next drink. The actors collectively bulldoze through the fourth wall, creating a wonderfully rowdy atmosphere where holding a sick bucket in the front row (or “the vom zone”) is considered an honour. The run at Leicester Square Theatre has been extended until August 27th, so there’s still plenty of time to be part of the madness. If you’re one of these people who has been known to get annoyed at watching your friends act like drunken idiots, I would suggest that turning up completely sober is a wasted opportunity – regardless of the degree to which it is staged, this is a night out.