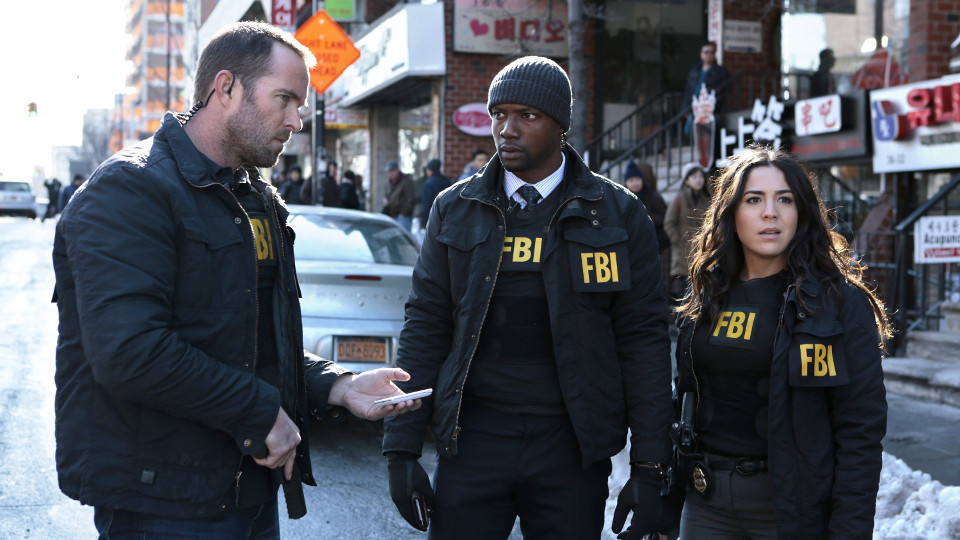 On the latest episode of Blindspot, Jane (Jaimie Alexander) was given a new mission by Oscar (François Arnaud) – to plant a GPS tracker inside her team’s vehicle. Reluctantly she agreed as she didn’t want to see Weller (Sullivan Stapleton) get hurt.

After the cliffhanger at the end of the last episode Reade (Rob Brown) awoke with a gun to his head. His attacker warned him against continuing to investigate the death of Carter.

A painting of a rose was stolen in a heist at an art gallery. Patterson (Ashley Johnson) noticed that the painting matched one of Jane’s tattoo’s. While at the gallery Weller spotted something suspicious about one of the sculptures. It turned out that it contained a bomb and it exploded. He managed to get the team clear in time but was hit in the neck by shrapnel and taken to hospital.

Jane and Reade investigated the apartment owned by the artist and came under sniper fire. Jane was hit in her bulletproof vest but uninjured. She and the team tried to get to the sniper but he got away. Jane decided to go into hiding to keep the team safe and went to Oscar.

Oscar gave her details on the sniper who was one of their team gone rogue. He was out to get Jane and Oscar wanted to keep her safe. Instead she wanted him to help her stop him.

The team had a lead on the sniper and Weller signed himself out of hospital against medical advice. The lead took them to a shipyard where the sniper was hiding out. They tried to pursue him but he was prepared and trapped them inside a room. Weller had an idea and shot a hole in the metal door before filling it with gas.

Meanwhile Jane stole Oscar’s car and left him behind to try and help her team. She found the room where they were being held but was caught by the sniper before she could free them.

Weller blew up the door and the team rushed to Jane’s aid. Before they could get there she was saved by Oscar who grabbed the sniper and the pair fell into the water. Jane’s secret is safe for now.

At the end of the episode Reade decided to break things off with Weller’s sister, Sarah, in order to keep her safe. Jane went to see Oscar again who told her things were back on track and that the sniper was dead. However before the episode closed we saw that he had survived.

The next episode of the season is Any Wounded Thief. An armoured car full of chemical weapons is stolen, and it’s a race against time for the team to prevent a deadly attack from taking place.