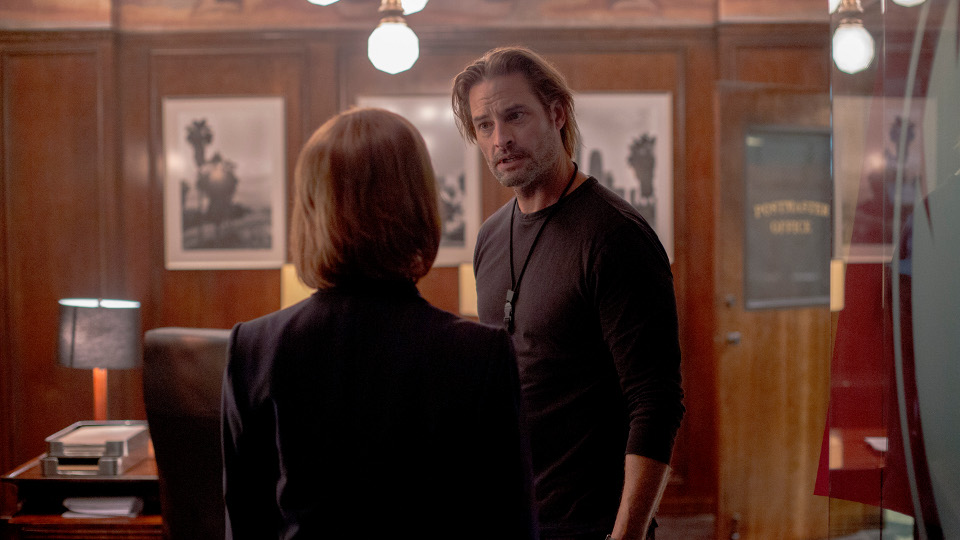 The pilot episode of Colony introduced us to former FBI agent Will Bowman (Josh Holloway) his wife Katie (Sarah Wayne Callies) and their children Bram and Grace. The family were living under a different name, the Sullivans, in a future LA where cities appear to have been walled off from each other by an occupying force.

They also have another son who has been split off from the family and is presumed to be in Santa Monica. Unknown to Katie, Will attempted to smuggle himself into Santa Monica with the help of a guy named Spider. Everything was going well until the Resistance detonated a truck bomb at the Santa Monica checkpoint. Lots of people were killed, including Spider, but Will survived and was arrested.

Meanwhile, Katie went out in search of insulin for her sister’s son. Since the occupation many resources have become scarce and people trade goods to get what they need. During a black market deal Katie realised something wasn’t right and pulled a gun to escape. It was revealed that possession of a gun is punishable by death.

When Will didn’t return home from work she risked her life again by going out after curfew. She sought out one of Will’s co-workers to try and find out where he was. After no success she tried the hospital and stole some insulin while she was there.

Will was released from holding and taken before Proxy Alan Snyder (Peter Jacobson). He was hosting a cocktail party and after revealing he knew Will’s true identity he offered him a job working as a collaborator. His mission is to return home, track down the Resistance helpers and capture their leader known as Geronimo. Snyder also showed Will the launch of a spacecraft which indicated the occupiers are alien.

Will was then returned home to his relieved family. Later that night he discussed the job offer with Katie and urged him to take it. The next morning Snyder is in their kitchen with armed guards while he cooked breakfast. He wanted an answer on the job and pointed out the many perks they would receive if it was a Yes.

Will tried to push for their son back, in return for helping, but Snyder pointed out that things worked the other way around.

At the end of the episode it was revealed that Katie is working for the resistance.

The next episode is Brave New World. As Will begins his first day as Proxy Snyder’s inside man, Katie makes a secret commitment. Carlos suffers the consequences of Will’s actions.

Tune into Sky 1 at 9pm on Thursday to watch the episode. Preview episode 2 with our gallery below: