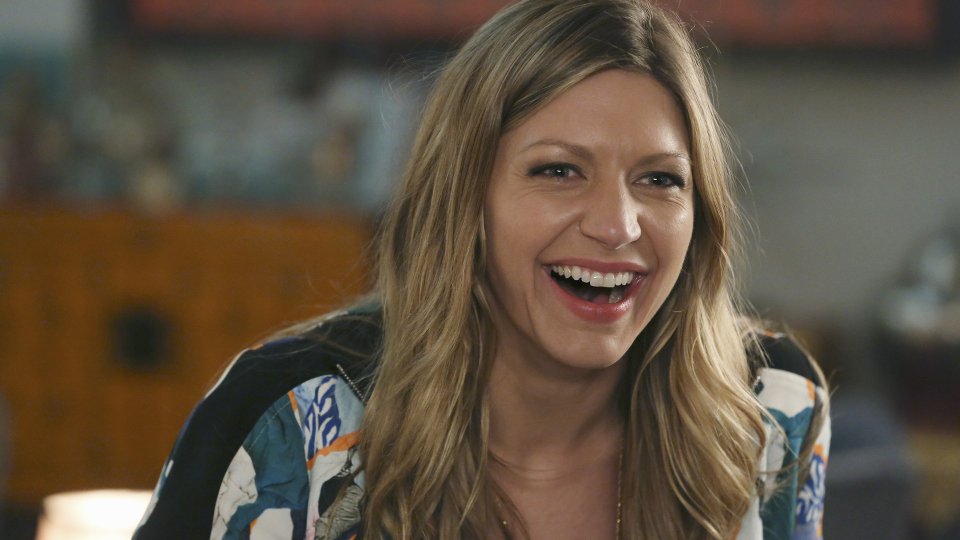 Joss (Jes Macallan) got out of prison in the season finale and came face-to-face with Luca’s (Noam Jenkins) murderer.

If you haven’t seen the season 3 finale of Mistresses and want to avoid spoilers then we suggest you stop reading now. If you have seen it and want to relive the action then keep reading.

Joss was released from prison following Calista’s (Jennifer Esposito) confession and was pleased to find that Harry (Brett Tucker) was waiting for her. She wasted no time in getting reacquainted with Harry in the bedroom and she found out that Harry had a potentially big interview to be in a cooking web series. The next morning Joss caught up with Karen (Yunjin Kim) and April (Rochelle Aytes) but soon found that her friends weren’t having easy lives either.

Marc (Rob Mayes) struggled to get through to April following the revelation of his sobriety slip. Despite their arguing, April was there for Marc when Miranda (Kate Beahan) came to take Scotty (Julius Fair) home. As Marc said a tearful goodbye, April exchanged a few words with Miranda who told her that Marc was in love with her. April seemed shocked and Miranda questioned how she couldn’t have realised that he had feelings for her.

Marc went to see Harry and quit his job. When asked about whether or not he told April about his feelings, Marc dismissed the notion that anything could happen between them. April returned home to find a note from Marc on the bed saying that he had left town. Later that day April spoke to Joss and finally realised that she was in love with Marc. She decided to call Marc but couldn’t get through to him and suggested they go to Harry’s restaurant to see Marc.

April got to Harry’s restaurant to find out that Marc had left town and she was devastated. She returned home where she tried to find out what flight Marc would be on. When she got nowhere she hung up the phone and set out to find him. Turns out she didn’t have to look too far as Marc was outside her house and ready to finally tell her that he had feelings for her. April responded by kissing him!

Alec (Ed Quinn) and Karen (Yunjin Kim) anxiously waited for news on Vivian (Sonja Bennett) following her collapse. At the hospital Alec was furious when he discovered that Karen had kept Vivian’s failing health from him. Alec banned Karen from the hospital forcing her to use a friend at the hospital to keep her informed about Vivian’s condition. Karen sneaked in to see Vivian and the two women had a chat with Vivian getting sentimental and emotional.

Vivian went into cardiac arrest and a frantic Karen tried to contact Alec. The doctor told Karen that Vivian was deteriorating faster than expected and informed her that she didn’t have much time left. Karen tried again to contact Alec but still couldn’t get through to him. She eventually found him in his office trying to find another way to keep Vivian alive but Karen told her it was too late.

Alec and Karen rushed to Vivian’s bedside and she told them she wanted to make a video to be shown to their unborn baby. Karen shared some truth bombs with a sleeping Vivian thanking her for the impact she’d had on her life. Alec and Karen left the hospital and the Karen got into her car in tears.

Calista refused to see her lawyer and asked her jail friends to help her get hold of something. What we hear you ask? It was equipment to hang herself and end her life. Whether or not she goes through with it or not will be revealed in the next season!

Harry went to his job interview for the web series alongside a famous chef. After wowing during the interview he was offered the job but he hadn’t realised that it would mean he’d have to travel for a year through Europe. On his way back from the interview Harry called Joss and asked her to meet him at their new house for the inspections. As Joss let him down, Harry was visited by Marc who decided he wanted to quit his job and leave town. Harry then went to see Joss and told her about the job opportunity and told her that he wouldn’t take the job as he didn’t want to be away from her for a year. She insisted that he take the job and promised him that she would be waiting for him.

Harry found out that he got the job and met with Joss to tell her that he’d negotiated taking her with him in his contract. Joss agreed to go with him but was distracted by her Calista stalker drama.

And the killer is…

Joss received a mystery package to Karen’s apartment that seemed to be from Calista. Scared she went straight to her lawyer to try and get a restraining order against her former frenemy. Whilst at April’s shop, Joss got a text message from Calista and rushed to the prison to see her. Joss was furious that Calista was trying to be friendly with her and told her that everyone knew she was guilty of Luca’s murder. When Joss accused Calista of stalking her, Calista denied that she had anything to do with it and pointed out that Joss was free because of her. Returning to Karen’s apartment, Joss called Calista’s lawyer to find out why Calista had confessed to the murder. She didn’t get very far but she did realise that maybe Calista wasn’t behind the gift and the text message.

Joss called the police on the hunch that Calista was innocent. When they didn’t listen to her, Joss continued to investigate by calling the shop that the gift basket had come from. She should have been on her way to Harry but instead she decided to pay a visit to Calista’s house. By taking a detour Joss left Harry hanging at the airport but nothing could prepare her for what was inside Calista’s house. As she went through the front door she saw someone that looked like Calista but on closer inspection it was Calista’s assistant Wilson (Jarod Joseph) dressed as her and holding a gun at Joss…

Mistresses will return for a fourth season in 2016.