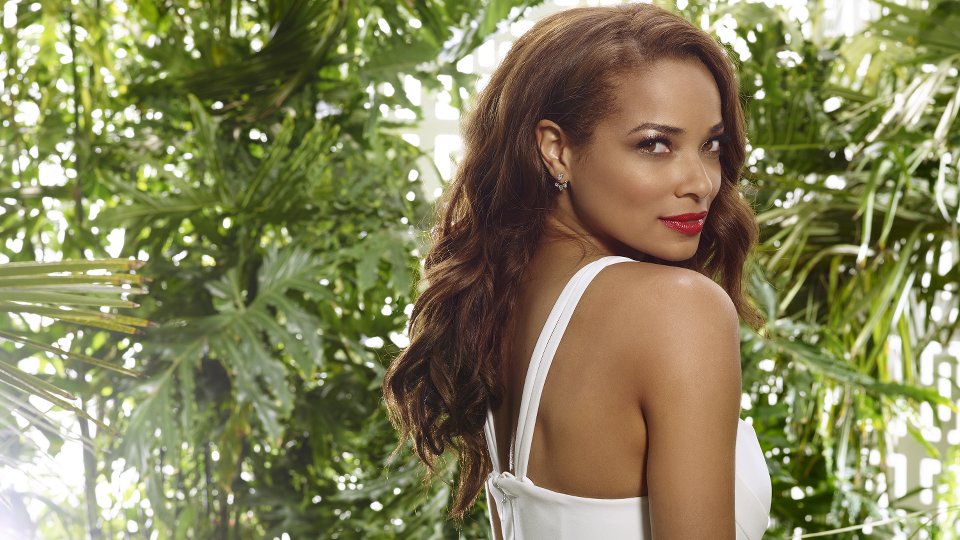 The fourth season of the deliciously scandalous drama Mistresses arrived in the UK this week picking up from last season’s cliffhanger that saw Joss’ (Jes Macallan) life hanging in the balance.

In the first episode of season 4 it was revealed that Joss had survived her ordeal, April and Marc were making a proper go of their relationship, and Karen was adjusting to life as a single mother following the birth of her daughter Vivian.

I called Rochelle Aytes to find out what’s to come this season, talk about the big changes in store for April, and to discuss the challenging relationship between April and Marc.

At the end (of season 3) Marc said that he loved April so now you see them together nesting and making this relationship work. April has downsized her house and moved into something much smaller so she can help Marc’s new life and they can figure out what to do. He’s not making any money and April is pretty much taking care of everything, which is why they downsized. April is also dealing with her daughter Lucy who is just growing up too fast and you’ll see within the next couple of episodes that there’s some kind of friend who is male (laughs) that she can’t really accept into her daughter’s life.

It sounds like a lot of change for April this season. Is it possible that there’s just a bit too much change for her to cope with?

I don’t know if it’s too much change so much as Marc has to grow up. If he doesn’t grow up, get himself together and find a job, I don’t know if it’s going to work. We’ll have to wait and see but it definitely is a lot of change. Marc has to pull his weight and if he doesn’t I think it’s going to be very challenging for the two of them to be together. It’ll be another one of those situations where the woman has to take care of the man and that’s not the right type of balance.

We saw in the first episode of the new season that Marc’s search for a job ended pretty quickly when he decided he wants to pursue music. That seems to have put the relationship into a spin and is making April question what she wants too. Are we going to see both characters exploring their career paths?

Coming up in episodes 2 and 3 you’re going to start seeing April looking and searching…not even for a new passion because it’s her art. She used to be an artist, and we tapped into that a few times last season, but now she’s going back to it. I guess Marc has inspired her to follow her passion as well and we’ll see if that works because she’s stepped away from it for so long. He’s focusing on her music, which later will cause a conflict, but you’ll see April trying to open up old passions and see if it works.

Further into the season there’s the introduction of a man called Michael who may cause issues for April and Marc. What can you tease about that character?

Well. Hmmm… Michael comes in as someone who is designing his house and April ends up helping him to design it, which becomes another passion of hers. What the audience will see is there’s a connection going on between them but in April’s eyes we’re not really sure if it’s a friendship or if it’s more. There’s a huge, huge shocker in that storyline between April and Michael, which I won’t give away but it’s definitely not what people are expecting.

April and Lucy had a rough time during season 3, which peaked with April slapping her daughter. Are they going to find their way back to each other this season?

They are definitely going to find their way back. April and Lucy are, I think, a typical mother and daughter with a lot of scenarios that parents go through and we’ll continue to explore that. It’s like life so as Lucy grows up there will be different conflicts and more challenging situations for them to have to go through.

Marc has slipped into the role of Lucy’s father this season. Is that something that is going to create problems?

He has moved into this father figure role and he likes it. I think it’s a little jarring for April to accept it sometimes because she’s used to being the only parent in the house and the decisions being made solely by her. There will be some compromising going on later in the series where April allows Marc to have more say in the raising of Lucy, which is not easy.

One of the big changes for season 4 is the reintroduction of Harry’s sister Kate as a regular character. During season 3 Calista Raines didn’t really integrate with the group. Is Kate going to be a more integral part?

Yeah. I think that was their goal last season (for Calista) but for some reason the storylines turned somewhere else. She was supposed to be introduced to our clique but Kate will definitely bond with us much more. You’ll see Kate is awesome, she’s fun and she brings this new energy to the show. I think everybody will enjoy her character.

What can you tease about the other characters this season? Is Karen going to continue being the series’ hot mess or will she get it together this year?

She can’t be Karen without being a hot mess – that’s her trademark now. Karen is a great therapist that gives great advice but doesn’t take her own (laughs). She is in a complicated situation. Jerry O’Connell is going to be in the show and he plays her manny for a little while until lines get blurred, let’s say that. Karen tends to make some bad decisions from time to time.

(laughs) The best people who give advice don’t live by their advice!

What about Joss? We know that she survived her ordeal with Wilson. Where will her character go this season?

Joss is dealing with the post traumatic stress disorder because of the whole Wilson situation. She’s finding ways to cope so she joins this gym where she can get out her aggression and bond with other people. She becomes very strong and is all about being empowered and taking her life back. There’s a storyline that she goes through because of that situation and she’s trying to take control of her emotions because she’s so sensitive right now. We don’t know exactly what happened in that room (with Wilson) but something major must have happened to create such a discomfort within her. You’ll see some great stuff between her and Harry. She’s taking her publicity business to the next level so you’ll see some fun and exciting characters come out.

I’ve been shipping April and Marc since season 3. Should I keep up hope that they’ll make it through this season?

In this article:Mistresses, Rochelle Aytes