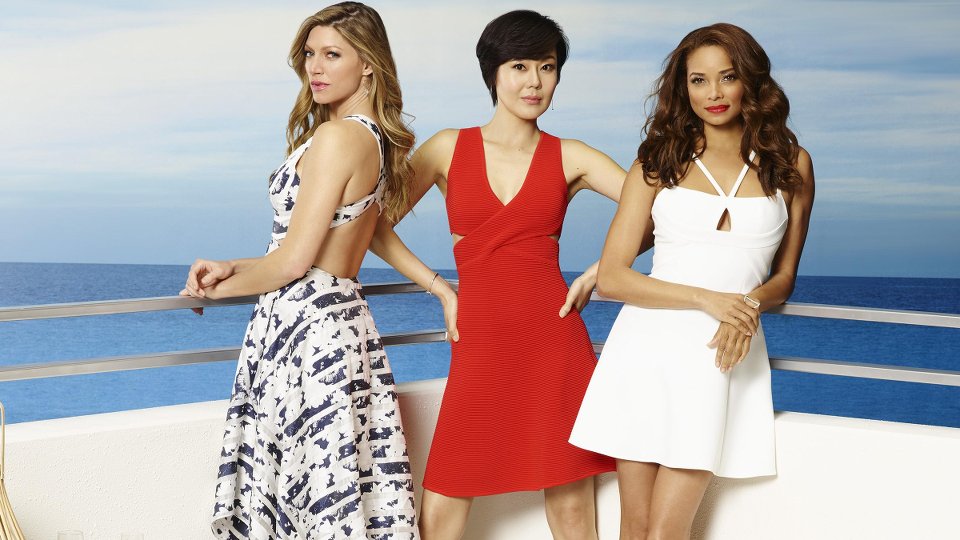 Frothy US drama Mistresses had the rug pulled out from under it recently as ABC announced that the show had been cancelled.

If you haven’t seen the fourth season finale of Mistresses and want to avoid spoilers, we suggest you stop reading now. If you have seen it and want to hear our thoughts on a fifth season keep reading.

The fourth season finale of Mistresses delivered a pretty massive blow by killing off regular character Karen Kim (Yunjin Kim), who died by falling over. It’s unclear if she fell over the balcony she was trying to talk Lydia (Alanna Masterson) down from or if she hit her head on the railings on died. The episode didn’t waste any time telling us those details instead showing us her funeral, then her friends packing up her apartment before it jumped into the future.

The episode spent a lot of time setting up a fifth season so it seems a little cruel that ABC didn’t see fit to give it one last hurrah. Even if it were a shortened season, I would have preferred that to the storyline strands left hanging (forever).

With the time jump it was revealed that April (Rochelle Aytes) and Marc (Rob Mayes) had their baby, Joss (Jes Macallan) and Harry (Brett Tucker) also became parents, and Kate (Tabrett Bethell) was back to her flirtatious best trying to bed anything with legs and male anatomy. Two surprises were thrown in; firstly Harry found out he had a son called Gabe (Max Lloyd-Jones) who was in his early 20s and April and Joss became convinced that Karen may have faked her death.

As the episode drew to a close Harry convinced Gabe to move in with him and Joss (without telling Joss) and April discovered that there was another Karen Kim in town, who appeared to be imitating her late friend. Now we’ll never know what happens next and honestly it’s pretty damn frustrating!

I’ve pulled together 10 reasons why I wanted to see a fifth and final season of Mistresses.

1. Who is Karen Kim? Is she a stalker? Is she the real Karen Kim who the Karen we knew was imitating? Is she just a woman with the same name and handwriting sporting a similar look? I’m interested to see how this mystery would have played out because it seemed like this new Karen was going all out to make people think she was the late Karen Kim.

2. Gabe. He may have only been in one episode and had to fend off Kate’s advances by telling her she was his nephew (creepy) but I liked the potential Gabe had. It would have been nice to have some younger blood on the show to take it back to its sexy, frothy, silly earlier seasons. Plus he was hot. Am I right?

3. Savi (Alyssa Milano) should have made a triumphant comeback. To be honest I’m still baffled as to why Alyssa didn’t return to the show when it’s filming moved back from Canada to Los Angeles during its fourth season. Savi’s absence at Karen’s funeral (who was one her best friend let’s not forget) was explained away by Joss who revealed she was heavily pregnant. What better time to come back than the fifth and final season?

4. Kate had the potential to be the show’s hottest mess yet. The whole situation with Scott (Justin Hartley) fast-tracked Kate to the kind of hot mess status usually reserved for Karen. I would have liked to have spent more time with Kate and seen her develop past a neurotic nightmare. In the finale she seemed more settled in Los Angeles and she was definitely on the look out for love.

5. Happier times for April and Marc. Their relationship hit the rocks big time during season 4 and it was exhausting seeing them pulled apart (and finally put back together). Now they have a child together, it would have been nice to see them really co-exist as equal parents, especially after April didn’t take all too kindly to Marc trying to be a father to Lucy earlier in season 4.

6. Harry adapting to fatherhood. The strain between Joss and Harry was showing again as Harry refused to deal with his own child due to the fear that he wasn’t going to be a good father. If any couple deserves a break it’s Joss and Harry so if they’re going to fight over Gabe, they could at least unite over their child.

7. The guy candy. Tuning in to Brett Tucker and Rob Mayes every week was a joy so to not have this is just downright unfair. I’ll also miss their bromance, which became one of my favourite things about the show.

8. Alec (Ed Quinn) to come back for at least a guest spot. Just because Karen is dead, that doesn’t mean that her daughter Vivian should have to disappear. It’s realistic to think that Joss and April would still want to be a part of her life and Alec has proven to be a bit of a scandalous character so I’m sure he could cause some trouble. Kate’s still available after all!

9. The return of some familiar faces. A final season is all about the nostalgia and there have been so many characters come and go over the series, that there’s plenty of scope for some to return. Dom (Jason George) has made a few appearances since Savi left and we wouldn’t have minded him come back for the final season.

10. The female bonding. Mistresses may have been frothy and silly at times but it had kick-ass female characters with an important message about friendship. The scenes in April’s shop were always fun to watch and I’m going to miss the interaction between the ladies.

Mistresses recently concluded its fourth season on ABC in the US and airs at 10pm on TLC in the UK.