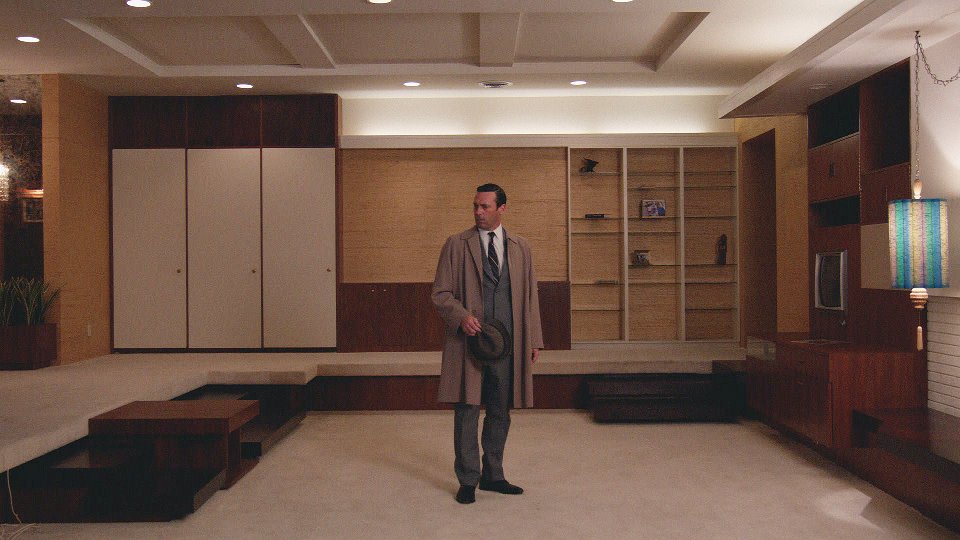 Don Draper (Jon Hamm) closed another chapter of his life and potentially opened a new one on this week’s episode of Mad Men.

If you haven’t seen the latest episode of Mad Men and don’t want any spoilers we suggest you stop reading now. If you have seen the episode and want to relive all the action keep reading.

New Business opened with Don sharing a jolly breakfast with Betty (January Jones) and their two sons before Henry (Christopher Stanley) interrupted them. The rather happy opening was a sharp contrast to the rest of the episode that put its central focus on Don’s divorce from Megan (Jessica Pare). As Megan arrived back in New York, after calling Don for financial help, with her sister (Kim Bubbs) and mother (Julia Ormond) in tow, Don made himself scarce so there were no ugly run-ins.

Turns out Megan didn’t need Don to make her life more miserable as her own family did it for her. Her sister wasted no time in pointing out the embarrassment she believed Megan had caused the family by getting divorced whilst Marie had her own agenda that included taking everything in Don’s apartment and leaving him with nothing in an act of revenge. As Megan left Marie to pack up the rest of her things, Marie decided to clean out the whole apartment then called on Roger (John Slattery) for financial help with the removal company and a quickie in Don’s bedroom.

Megan meanwhile took a meeting with Harry (Rich Sommer) about getting a new acting agent and the former co-workers reached an awkward situation when Harry propositioned Megan in exchange for helping her. She refused and left the meeting whilst Harry ran to Don and claimed that Megan was unstable to hide his tracks.

The face-to-face with Don finally arrived and Megan dished out a whole lot of truth claiming that Don had ruined her life. In a moment of rare emotional honesty, Don apologised and wrote her a cheque for $1 million so that she could have the life she deserved.

Megan then returned to Don’s apartment and caught her mother post-coitus with Roger. Shocked and angry, an argument ensued and it transpired that Marie had decided to leave her husband and shack up with Roger in New York.

Whilst his divorce was being finalised, Don continued his pursuit of waitress Diana (Elizabeth Reaser). In one of his creepiest moves yet he tracked her down to a new restaurant she was working in and aggressively pushed his phone number on to her. After she finished her shift she called him from the restaurant waking him up, and promptly arrived at his apartment. It didn’t take long for the two to move to the bedroom.

The next morning Don found Diana in Sally’s (Kiernan Shipka) room and she revealed that her daughter had died of the flu before arranging to see Don again that night but this time at her apartment. Upon his arrival Diana revealed she had lied and she actually had two daughters. Her youngest daughter had died, that was true, but she left her oldest daughter so she could move to New York and start a new life.

It seems that Don may have found a woman not unlike himself; mysterious, full of secrets and reinventing herself so she can have a fresh start.

In the episode’s most enjoyable storyline, Peggy (Elisabeth Moss) and Stan (Jay R. Ferguson) found themselves battling one another and the object of the same person’s affections. Peggy pushed to hire photographer Pima Ryan (Mimi Rogers) for a campaign much to Stan’s disgust as he wanted to do it himself. Peggy is drawn to Pima’s powerful presence and watches as the photographer seemingly destroys Stan’s confidence for her own pleasure.

It soon turned out it wasn’t quite that simple and Pima had treated Stan the way she had to get into his pants. Stan wasn’t the only person Pima had her own on though and she made a pass at Peggy later in the episode as the two were sifting through her shots. Peggy refused Pima’s advances but felt smug that the photographer had hit on her until Stan revealed that he’d slept Pima. Hitting out Peggy pointed out that Stan’s girlfriend would likely not be pleased about that putting a sour note over his conquest. She rubbed it in by telling him Pima hit on her two, something he at first didn’t believe.

Tune in to AMC at 10/9c on Sunday in the US and Sky Atlantic HD at 10pm on Thursday in the UK to see the episode. Watch the promo for next episode The Forecast below: