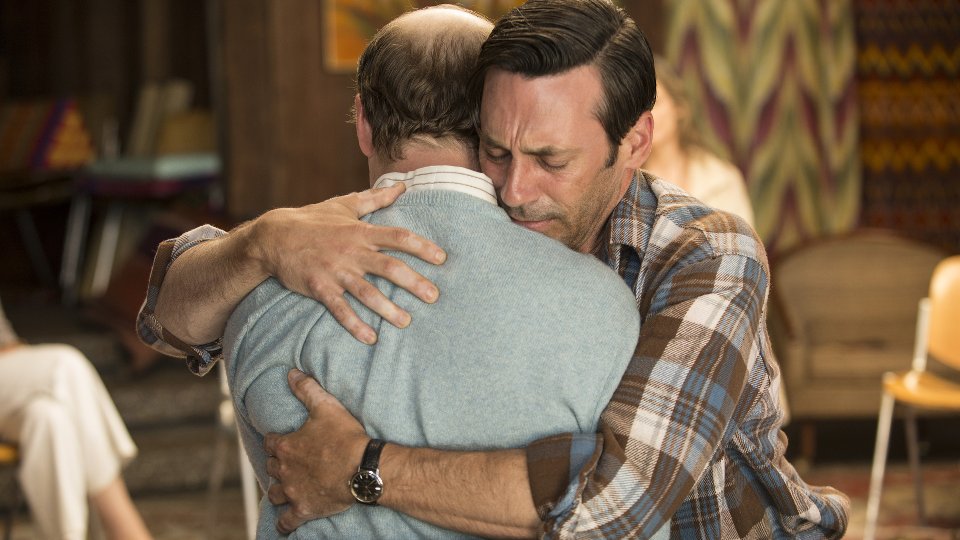 If you haven’t seen the series finale and don’t want any spoilers we suggest you stop reading now. If you have seen it and want to relive all of the action then keep reading.

Don started the episode witnessing Gary Gabelich’s Blue Flame break the land speed record at the Bonneville Speedway. He then called Sally (Kiernan Shipka) who told him of Betty’s (January Jones) diagnosis. Shocked by the news Don reached out to Betty and offered to come home to take care of the kids. She pleaded with him not to and said that him being around would prevent the normal life she was trying to provide for the kids whilst she was still alive. Betty also reinforced that she wanted the children to be looked after by her brother.

Don continued his journey West and he dropped in on Anna’s (Melinda Page Hamilton) niece Stephanie (Caity Lotz) who was pregnant last we saw her. She wasn’t best pleased to see him and revealed that she had given her baby away. Don tried to give her Anna’s ring, which was Megan’s (Jessica Pare) wedding ring, but she refused to take it. The next day Stephanie took Don with her to a spiritual retreat but she soon abandoned him after she received harsh feedback about her decision to give up her baby from a group member.

Stuck with no way of leaving, Don called Peggy (Elisabeth Moss) and worried her that he was going to end his life. Peggy begged him to return to McCann but he wouldn’t listen and instead gave her a rundown of all the things he’d done wrong in life. He was found by the retreat leader (Helen Slater) and taken back into group where he broke down in tears whilst another group member whom he felt an affinity with.

Domestic bliss with Richard (Bruce Greenwood) came to an abrupt end for Joan (Christina Hendricks). After returning from a break, where they enjoyed each other and cocaine, Joan started getting the itch to work again. After meeting with Ken (Aaron Staton) and receiving a business proposal, Joan reached out to Peggy with the offer of a partnership in her new production company she wanted to set up. Surprised when Peggy didn’t bite her hand off and say yes, Joan was left in limbo as Richard left her displeased with her ambition. Peggy eventually said no to Joan’s proposal but that wasn’t going to stop her.

Love is in the air

The moment we’ve been longing for finally happened in the season finale as Peggy and Stan got it together. Following Joan’s proposal, Peggy discussed the opportunity with Stan but got angry when he pointed out that not everything in life is about work. She hit back with some cutting criticism causing him to storm off. Later in the episode Peggy sheepishly called Stan after receiving Don’s bizarre phone call. Worried about her former boss and mentor, Peggy looked to Stan for advice but another argument ensued. This quickly turned into Stan confessing his true feelings for Peggy leaving her shocked. She realised she had feelings for Stan too but as she was admitting them, he had put the phone down and rushed up to her office. The two kissed and it looks like it’s happily ever after for the best friends turned lovers.

Roger (John Slattery) fired Meredith (Stephanie Drake) after realising Don may not return and decided to make a real go of it with Marie (Julia Ormond). The two were seen in a café in Paris on their honeymoon observing an elderly couple. Pete, Trudy (Alison Brie) and Tammy boarded a plane to Wichita giving closure and a happy reunion for the family. Betty was still alive by the final scenes but Sally had taken on a bigger role looking after the family whilst her mother lived out her final days. Joan pressed on with her production company under the name Holloway Harris, which she ran from her apartment.

What about Don? He was seen meditating at the retreat with a big smile on his face before the episode ended with the groundbreaking 1971 Coca Cola advert. It’s inferred that the retreat and his journey West gave him the inspiration for the advert so we assume he returned to advertising and his old life.

Mad Men is available to buy on DVD and Blu-ray now.