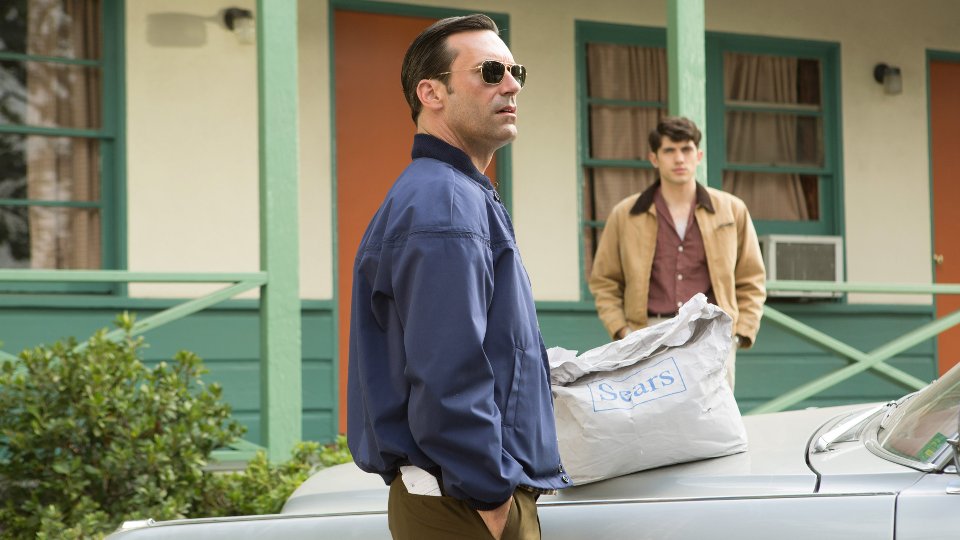 Just when you thought things couldn’t get any bleaker on Mad Men before the series ends next week, they just did.

If you haven’t seen the episode and don’t want any spoilers we suggest you stop reading now. If you have seen it and want to relive the action keep reading.

Don (Jon Hamm) continued his trip West and started the episode having a nightmare about being caught by the police for being a deserter. He then called Sally (Kiernan Shipka) from his motel room and it seems the two have worked on their fractured relationship. The next day Don’s car broke down so whilst he had it serviced, he befriended the motel cleaner Andy (Carter Jenkins) whom agreed to get Don some books and beer. It didn’t take long for Don to realise that his new friend was a conman but he saw himself in Andy so gave him a pass. Something that proved to be a poor decision on Don’s part later in the episode.

After being pushed into it by the motel owners, Don agreed to attend a fundraiser at the American Legion. He got drunk and chatted with the locals bonding over their war stories. The next morning his new friends weren’t so friendly when they broke into his motel room, held him down and beat him up with the phone book believing that he stole money from their rescue fund. Despite protesting his innocence, Don was left with a sore face and an ultimatum to return the money or he wouldn’t get his car back.

Don realised quickly that Andy had set him up and he scared the boy into giving him the money. Don then returned it to the motel owners and set about on his way with Andy in tow. As he arrived at the bus stop he was supposed to be dropping Andy off at, Don gave his conman friend the keys and went and sat on the bus stop bench. Andy drove off leaving Don smiling on the bench.

Betty (January Jones) received some shocking news after collapsing whilst climbing a flight of stairs to her psychology class. After the doctor insisted she call her husband, Henry (Christopher Stanley) arrived and the couple dealt with the news that Betty had cancer. Determined to get a second opinion, Henry’s efforts to find a miracle cure for Betty failed when he was told in no uncertain terms that the cancer had progressed too far.

Whilst Betty tried to process the news, Henry reacted with anger and made an impromptu visit to Sally’s school to tell her the news against Betty’s wishes. Hoping that Sally could convince Betty to fight, Henry brought her home but her presence wasn’t embraced. Instead Betty visited Sally in her room to hand her a letter and asked her to take care of her last wishes when the time came. When asked why she wasn’t fighting for the year she could have, Betty admitted that she knew when something was over.

With potentially only months to go, Betty returned to class and pretended everything was fine whilst Sally read her mother’s letter and the reality of the situation hit home.

Pete’s (Vincent Kartheiser) head was left spinning after a visit from Duck Phillips (Mark Moses) who tricked him into going for a job interview without telling him. Initially angry, Pete soon realised that there was a genuine opportunity there and had dinner with his brother (Rich Hutchman) to mull it over. Later on Duck arrived drunk at Pete’s hotel room and told him that his no show played in his favour and the job offer had become even more attractive.

Acting on impulse, Pete went straight over to Trudy’s (Alison Brie) to tell her about the job and asked her to move to Wichita with him and asked if they could be a family again. Trudy refused but Pete quickly wore her down and she agreed. Is Pete really going to get a happy ending with Trudy?

Tune in to AMC at 10/9c on Sunday in the US and Sky Atlantic at 10pm on Thursday in the UK for the series finale.