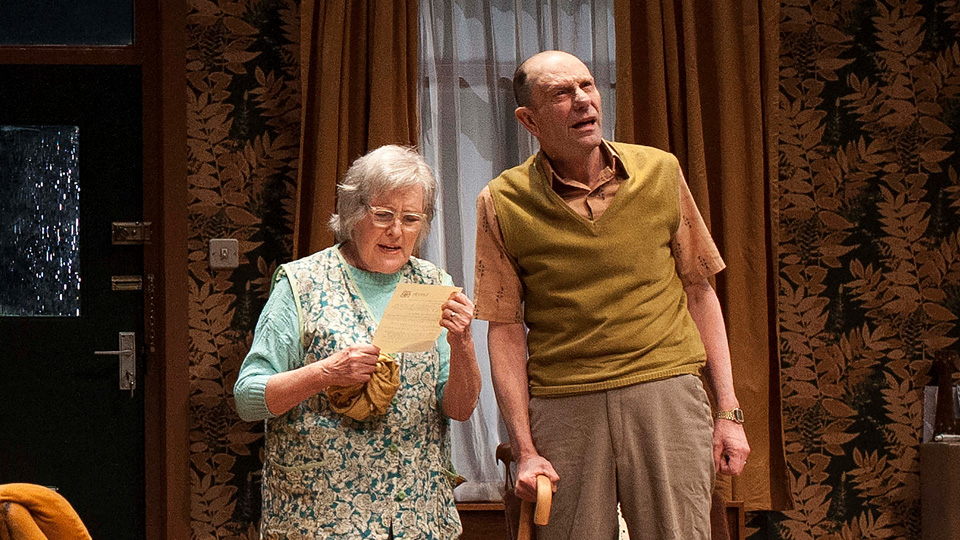 Enjoy opened in 1980, fated to become Alan Bennett’s singular flop at the time. Over thirty years later, the infamously experimental show launches a new season at the West Yorkshire Playhouse in honour of the Leeds-born writer.

Set in the early Eighties, Enjoy traces the effect of council housing redevelopment in one of the few remaining back-to-back red brick terraces in Leeds. The tenants, Mam and Dad, are chosen to be documented during the transitional process by the mysterious Ms Craig from the council. As a normal day gives way to extraordinary events, the world of Mam, Dad and their offspring becomes emblazoned in a social media whirlwind of experimentation, extortion and exploitation.

It is clear to see why an early Eighties’ audience rejected the wild ideas which Enjoy presents. The media machine which governs so many social habits of a new generation, such as Big Brother and Vlogging through YouTube, are staples of modern entertainment. The concepts of fly-on-the-wall documentaries and live feeds from people’s homes are commonplace forms of entertainment today. In 1980, however, things were very different. Television boasted three channels, documentaries were educational, news was functionally informative, and drama was just that. Enjoy not only blurs the lines of these standards, it blends them together into the horror we now recognise as reality television.

The issue with the script, however, is not its progressive ideas nor its original concepts, but rather its wild execution. Bennett excels in painting warm, eccentric collectives, often in a conventional setting. Audiences expect this and Enjoy begins very much in this traditional vein. There is a sense that Bennett begins to challenge his audience by subverting expectations and introducing styles and genres which clash and flip from scene to scene, shifting between sex farce, slapstick, melodrama, urban gothic, sitcom, documentary and outright body horror. Whilst a radical change in style is part of this show’s inventiveness, in terms of overall composition it changes tack from fantasy to documentary realism so rapidly that audiences could well become disengaged from the central characters as their reality is untenable. Ideas can be so far out that people get tired of trying to reach out and grasp them, and arguably this show is full of too many of these wild, albeit exciting, scenarios.

Nevertheless, Enjoy is brimming full of rich Northern voices and hilarious grotesques, showcasing Bennett’s skill in caricature and nostalgic reference. Mam is played beautifully by Marlene Sidaway, evoking warmth and charm. Philip Martin Brown balances Dad meticulously between clown and monster, whilst Sian Reese-Williams is deliciously cheap as Linda, their loveless daughter. Rob Delaney is a silent focal point of interest as Ms Craig; a fascination that is alluring through the character’s aloofness which is carefully underplayed.

Enjoy’s greatest success is in its drive for fresh, compelling staging and in this regard it is a triumphant work of modern theatre. James Brining’s direction is inventive and enchantingly busy; Mam and Dad’s domestic activities are choreographed beautifully, complemented by an evocative retro-chic set design by Alex Lowde. The framing of the stage with television studio dressings such as floor markers, scenery jakes and fire runs quickly establishes the encompassing mechanism of the media around the characters, hinting at the outside threat which is to invade Mam and Dad’s living room. The visual spectacle is further extended by innovative projections designed by Ian William Galloway. Mixing between live camera feeds and multiple viewpoints, the vista of the stage is extended to the streets of Leeds and beyond. An arrival of a car in one scene is so expertly achieved that it will leave many convinced that a vehicle has been driven on stage. Conceptually, this is theatre for a new generation of audiences who expect technology beyond lights, sound and haze. Enjoy delivers visual marvels in rapid abundance, counterpointed with its claustrophobic intensity in the kitchen diner setting. The level of production standard which this show achieves is a commendable achievement, culminating in a reveal of a fully operative studio gallery, with a breadth and scale that is a startling experience.

Enjoy is a bold and radical beginning to a season celebrating one of Yorkshire’s finest artists. Brave and innovative, it will appeal to those who think they know all there is about Alan Bennett, whilst for others it is an urgent reappraisal of a show which was undoubtedly ahead of its time. Surprising, enchanting and constantly challenging, West Yorkshire Playhouse has buttressed Enjoy with the technical spectacle it always needed to succeed.