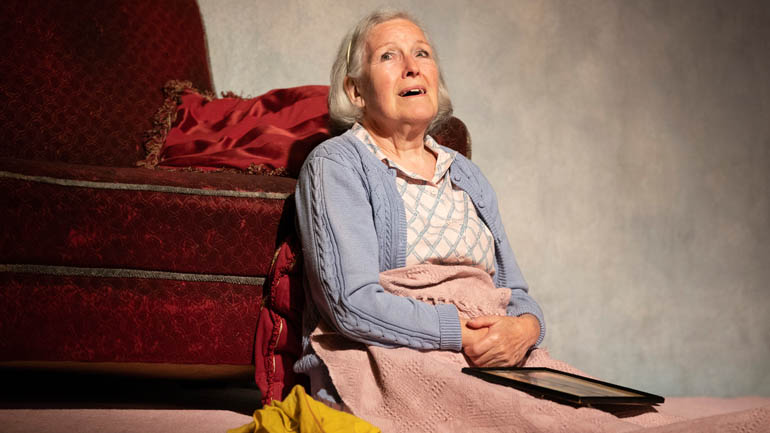 Following a tour of community venues across every postcode area in Leeds, Talking Heads reaches its final destination at West Yorkshire Playhouse’s Courtyard Theatre — the last production to play in the space ahead of an extensive redevelopment.

Talking Heads is a two-part programme of performance, offering five intimate monologues across alternate shows which bicycle between matinee and evening engagements.

Adapted from the highly successful television series by Alan Bennett, each trilogy offers a portmanteau of everyday local stories told with chaffing wit and Yorkshire warmth.

Talking Heads: Susan, Irene and Doris opens with Bed Among The Lentils; a funny yet tragic tale about the machinations of a fussy church community and a vicar’s wife who seeks intimacy outside of a loveless marriage.

Cate Hamer provides an absorbing performance as Susan, where Bennett almost champions the character’s rebellious descent into hedonism. The dialogue sings through Hamer’s charming delivery, which instantly engages and draws its audience into a Leeds of the recent past; an era of newly-established Asian communities, thriving church congregations and No 37 bus routes. Like much of Bennett’s work, this saucy story is built on a foundation of observational humour which lovingly cross-examines the quirky habits of real-life Northern eccentrics.

A Lady of Letters follows in a less sympathetic study of obsession and mental illness — played with acerbic, snotty brilliance by Vanessa Rosenthal. The character of Irene is captivating and chillingly complex; perfectly lending itself to the monologue format by defining loneliness through self-reflection and incessant, obsessional correspondence with unseen recipients.

Offering social commentary on the role of the church and the impact of public services, this bleaker middle-child of the trio smoothly transitions between Bennett’s gentle ridicule of religion to a firmer criticism of society in decline, decay and dissolution. It is a mournful theme which boldly dominates the final, extraordinary episode of the series.

A Cream Cracker Under the Settee closes the show as the sun sets on Doris’ living room; a fading light which signifies the end of a life whilst providing a moment to reflect on the missed opportunities of days gone by.

Marlene Sidaway’s gripping portrayal combines tragedy with laugh-out-loud wit, in a charming study of elderly defiance and pride. Sidaway’s physical movements are potently convincing as an injured woman facing her final hours; confronting and resigning to a fate with irresistible Northern drollery.

Each piece is directed with naturalism and plenty of immersive stage business, offering a domestic reality to each vignette. Dressings are slim but effective, ensuring that focus is always drawn on the speaker through a forced perspective set, which is not unlike the 4:3 frame of a traditional television set.

Talking Heads is a superlative anthology of intimate, poignant drama — brimming full of local zeal and wit from one of the region’s most celebrated authors. Stripping down performance to its barest essentials, this inviting collection of everyday tales remains as authentic, compelling and socially relevant as ever. Don’t miss out on the local gossip… go see.