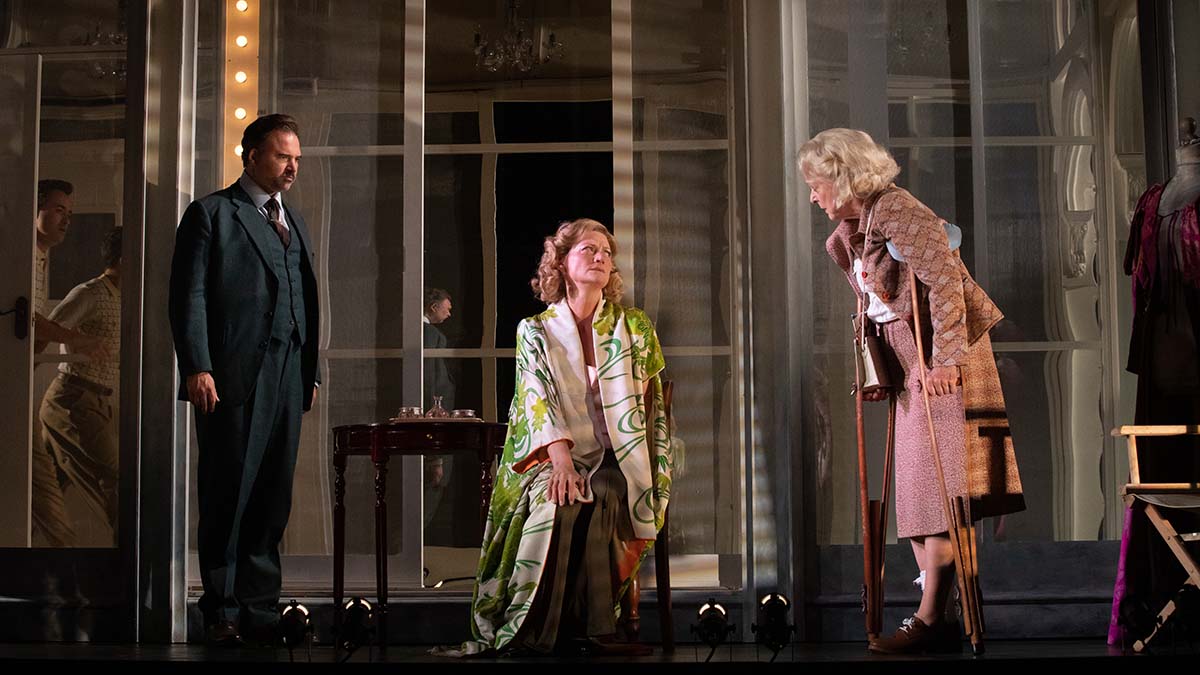 ‘The Mirror Crack’d’, featuring Susie Blake (Coronation Street) as the famous detective Miss Marple, is currently doing the rounds in a national tour. This week it is playing at The Churchill Theatre, Bromley. The new adaptation, by Rachel Wagstaff, stays reasonably faithful to the 1962 Agatha Christie novel upon which it is based. Any departures serve the story well whilst retaining the spirit of the original author’s intentions.

This production, which evokes the period of the 1960s, finds a sedentary Miss Marple resting a sprained ankle at home. She is visited by Chief Inspector Craddock (Oliver Boot) who tells her about a recent unsolved murder. During a party hosted by famous Hollywood actress Marina Gregg (Sophie Ward), a seemingly unknown and insignificant woman, Heather Leigh (Jules Melvin), is poisoned and dies almost instantly. As Marina had swapped drinks with her guest, it looks as though the real target for murder has escaped. Inexorably, events unfold which ensure that the body count grows and nobody is above suspicion. Working with the police inspector, Miss Marple uses all of her powers of observation to unlock the secrets of the past that she believes hold the key to finding the murderer in the present.

‘The Mirror Crack’d’ is a classic Agatha Christie story. It is full of enjoyable red herrings and gives the audience plenty to play along with. It’s fun to guess the identity of the killer and pick up on the clues that are dropped into lines of dialogue. There’s plenty of scope for amateur sleuthing during the interval. Is it the husband? Did the butler do it? Why are two young women acting so strangely around the famous actress? With plenty of suspense, twists and turns, ‘The Mirror Crack’d’ provides a throughly entertaining evening of theatrical entertainment.

This production will especially appeal to those who love a good murder mystery and have already enjoyed the many other Agatha Christie tours of recent years. Inescapably, the construction of the story is mechanical, though in adapting it, Rachel Wagstaff deserves credit for bringing out a lot of humour, which last night’s audience appreciated. Love them or loathe them, an Agatha Christie play brings with it many preconceptions, and ‘The Mirror Crack’d’ lives up to them all.

Under the assured direction of Philip Franks, a solid and high-profile cast brings the play to life. Susie Blake is endearing as Miss Marple, and makes no attempt to portray her in the same manner as any of the many screen versions. She’s impressively rock-solid on huge chunks of dialogue, rattling them off as if they are thoughts freshly popping into her head. Her chemistry with Oliver Boot as Chief Inspector Craddock is excellent, and their rapport is emotionally engaging. Joe McFadden is enjoyably showy as the actress’s brash husband and hotshot film producer, and Jules Melvin’s clear diction and sound comic timing ensure that poor Heather Leigh is a memorable murder victim. It’s Mara Allen as Miss Marple’s honest, Croydon-based home help Cherry Baker who rightly wins the lion’s share of the laughs. But it’s Sophie Ward who steals the show. It would be easy to stereotype a leading film actress as someone precocious and divorced from reality, but Ward’s intelligent portrayal ensures that she is humanised. At times, you feel genuinely sorry for her.

There are a couple of criticisms. Telling aspects of the story through flashbacks that play out in front of Miss Marple as she remains seated in the background is an original approach. Although a brave departure from linear storytelling, it doesn’t quite satisfy in the final analysis. Perhaps because it leaves our intrepid sleuth outside of the main narrative for a long period of time instead of doing what she does best: poking her nose into other people’s business from the start. Some actors were clearer on their dialogue than others too, which meant a few lines were missed towards the back of the auditorium. Finally, occasional musical interludes proved a touch intrusive, especially when adding atmosphere over dialogue.

In the final analysis, this production of ‘The Mirror Crack’d’ assembles a great cast and delivers a solidly-entertaining whodunnit. It does so with rounded performances and humour in the right places. If you love Agatha Christie mysteries, you’ll want to catch this one at a theatre near you.