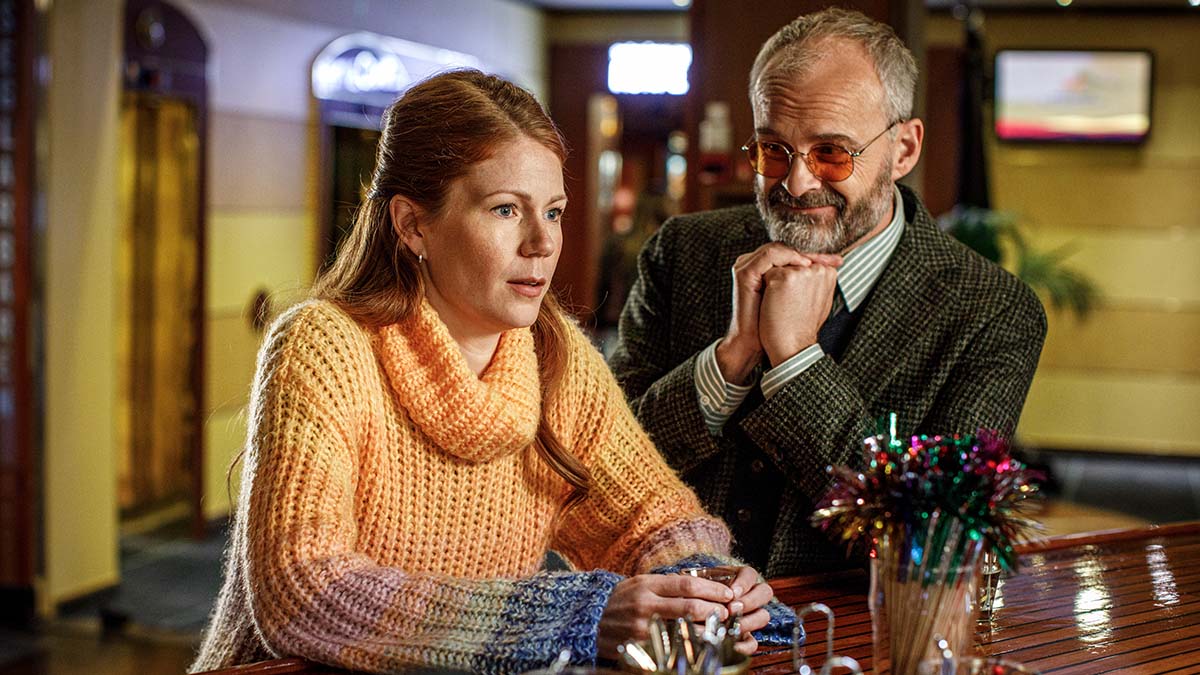 What words would you usually choose to describe a typical Walter Presents Nordic drama? Dark, violent, noir, moody, intense? Well, their latest Scandinavian release is none of those things. With ‘Hjerson’, Walter’s gone all cosy crime.

This is more akin to shows like ‘Murder She Wrote’, ‘Midsomer Murders’ or even ‘Death In Paradise’, where murder isn’t centred upon the victims and their violent demise; but it’s more about the puzzle of the whodunnit. You have a fixed cast of potential suspects, and it’s a matter of finding the clues and unravelling the mystery.

The opening episode is set aboard a cruise ship (a typically Christie-like location with a limited pool of suspects) where a journalist is found murdered following a brief power cut. But interestingly, the writers have added a clever dynamic by having Hjerson play mostly second-fiddle to Klara Sandberg, a disillusioned reality TV producer who is disenfranchised with the whole sordid format of reality TV, and instead pitches an idea to her bosses involving recruiting Hjerson to be in a show where he solves crimes. Sandberg, played brilliantly by Hanna Alström (whom you may recognise from the ‘Kingsman’ films), starts following the reclusive (and, we discover subsequently, disgraced) Hjerson, hoping to initiate an introduction to the famous detective. Her clumsy attempts to do so do little more than simply annoy the prickly and acerbic Hjerson – until she shows herself to be a valuable sidekick by lifting a piece of key evidence following the discovery of the murder.

I’m a huge fan of this sort of traditional whodunnit, even when it’s set in contemporary times, like this one. Who doesn’t love a puzzle, picking over the clues, eliminating the irrelevant and trying one’s best to work out the identity of the culprit before the on-screen detectives can? This show isn’t ground-breaking, by any stretch – some might think it cliched and ridiculous. But I think it’s great fun.

Hjerson and Sandberg are likeable characters – I look forward to seeing how their relationship develops in the coming weeks. And whilst most of the other characters are relatively one-dimensional and under-developed, this show isn’t really about the characters – it’s about the puzzle. And in that regard, it does a very fine job.

I salute Walter Presents for taking a gamble on something different with this show. I really hope it paves the way for more lighter entertainment. Don’t get me wrong – I love the Nordic Noir genre. But sometimes you crave a light snack instead of a rare beef steak, and this will satisfy your appetite perfectly.