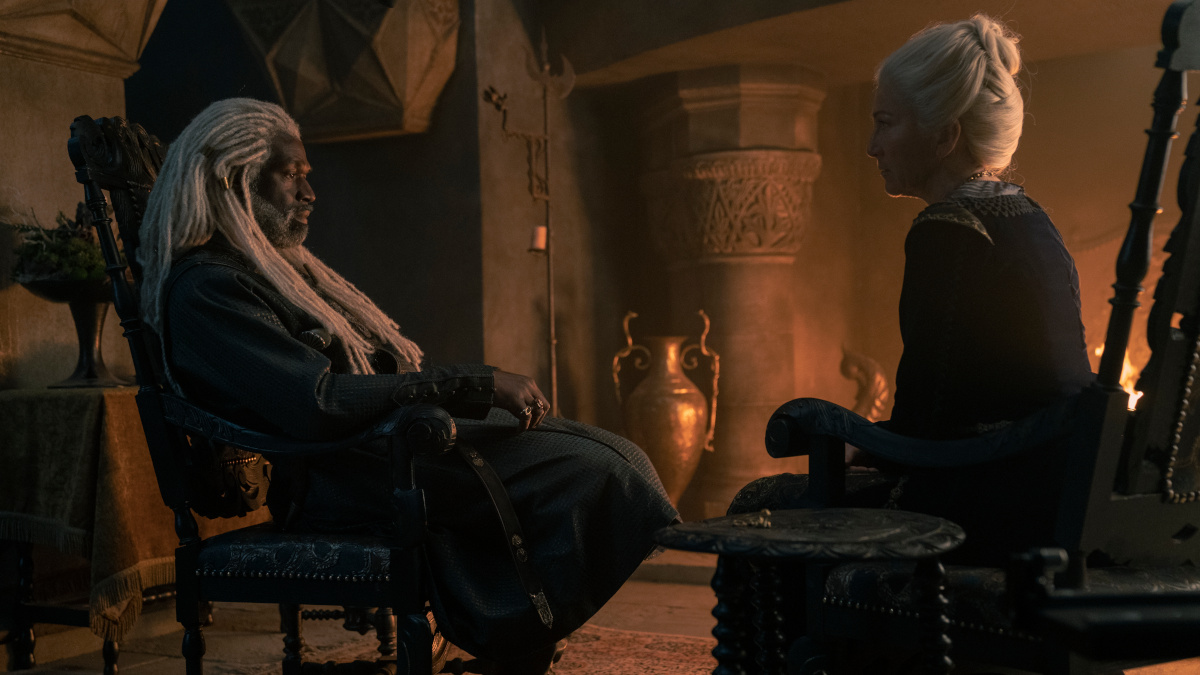 The sixth episode of House of the Dragon was set 10 years later. The focus was on the relationship between Rhaenyra (Emma D’Arcy) and Alicent (Olivia Cooke).

If you aren’t up to date with House of the Dragon and prefer to avoid spoilers then please stop reading now.

Episode 6 – The Princess and the Queen Quick Recap

At King’s Landing, Rhaenyra gave birth to her third son, Joffrey. Queen Alicent insisted she saw the baby immediately which saw Rhaenyra carry the baby to her, seconds after giving birth. Alicent went out of her way to make everything difficult for Rhaenyra and constantly complained about her and her children.

Rhaenyra’s other children Jacaerys (Leo Hart) and Lucerys (Harvey Sadler) both had young dragons, as did the King’s eldest son Aegon (Ty Tennant). They were learning to control their dragons but teased Aemond (Leo Ashton) for not having one himself. They gave him a pig dressed as a dragon as a joke.

The father of Rhaenyra’s children was revealed to be Ser Harwin ‘Breakbones’ Strong (Ryan Corr). He got into a fight with Ser Criston (Fabien Frankel) which ended up in his father Lyonel (Gavin Spokes) trying to resign. Harwin was thrown out of the King’s Guard and taken by his father to Harrenhal.

Daemon (Matt Smith) was in Pentos with his second wife Laena Velaryon (Nanna Blondell) and their two daughters Baela (Shani Smethurst) and Rhaena (Eva Ossei-Gerning). During the birth of their third child the doctor said he’d have to cut the baby out but wouldn’t be able to save Laena. Instead she commanded her dragon Vhagar to incinerate her and the baby.

Rhaenyra tried to make amends with the Queen but decided it was time to leave King’s Landing and went with the children, Laenor and his boyfriend to Dragonstone

At the end of the episode, Lord Larys arranged for three prisoners to assassinate his father Lyonel and his brother Harwin. A fire was started at Harrenhal in which they both perished. Larys blamed the fire on a curse but told the Queen he’d arranged it because she’d wished for it.

The seventh episode is titled “Driftmark” and is directed by Miguel Sapochnik. The episode 7 preview trailer and first images can be seen below.

The trailer opens up with what appears to be a funeral in Driftmark. This is presumably for Laena Velaryon after her death in the previous episode. It appears that the Velaryon’s and Targaryen’s are present. I notice that Viserys looks to be in better health.

With the murders of Lyonel and Harwin Strong, it looks like Larys’s plan will play out and Otto Hightower will return as Hand of the King.

Elsewhere it looks like someone at least tries to steal Laena’s dragon Vhagar.

House of the Dragon episode 7 will air on the 3rd October at 2am and 9pm on Sky Atlantic and NOW TV.