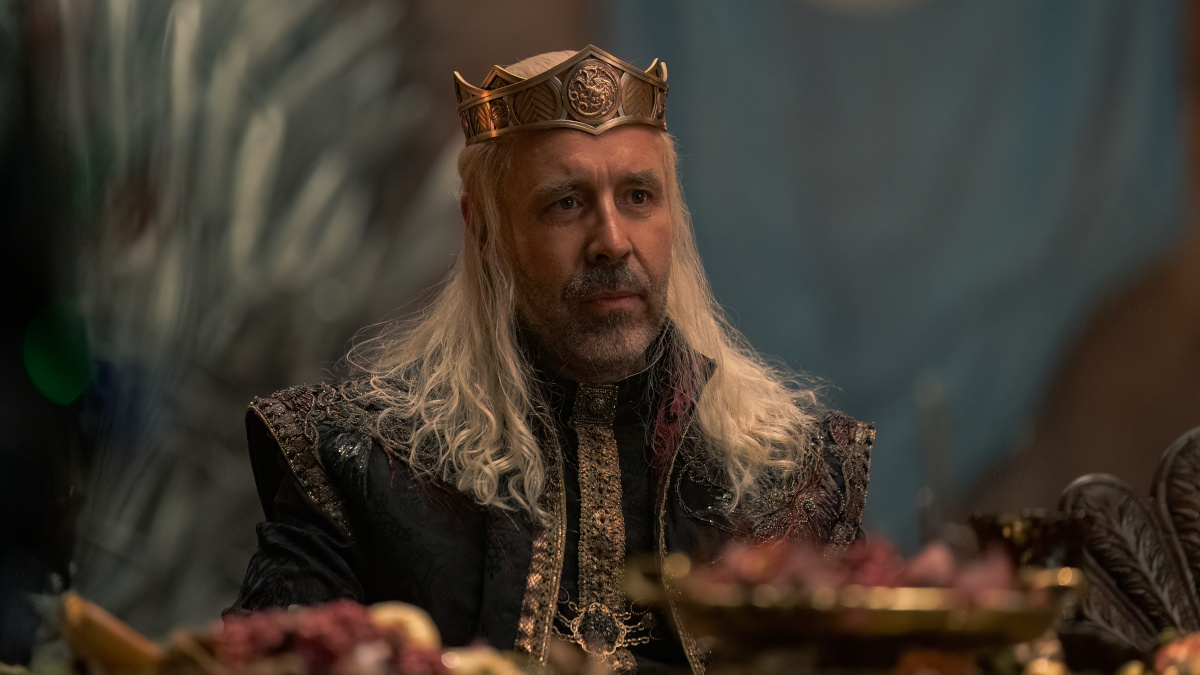 The episode opened up in the Vale of Arryn with Lady Rhea Royce out hunting. On her way back to Runestone, House Royce’s castle, she came across a silent hooded figure who turned out to be Daemon. She ranted at him before realising why he was there. As he stepped forward she reached for her weapon but was thrown from her horse. She appeared to be paralysed and Daemon stood on her arm to check. He walked away as she taunted him but returned with a large rock, presumably to finish her.

At King’s Landing, Ser Otto (Rhys Ifans) was readying to leave in the pouring rain. Alicent (Emily Carey) tried to stop him but he said it was her support of Rhaenyra that had helped the King make up his mind. He explained to her that Viserys would die and that war would follow if Rhaenyra succeeded him. He said to secure her claim Rhaenyra would have to kill her siblings. Otto told Alicent that she had a choice – prepare Aegon to rule or beg Rhaenyra for her mercy.

Later, in the godswood, Alicent was approached by Larys Strong (Matthew Needham) who was clearly trying to influence her. Larys said he’d heard that Rhaenyra was unwell and that the Grand Maester Mellos (David Horovitch) had made her a special tea. It was just enough information for Alicent to realise that Rhaenyra had lied to her.

Meanwhile the Targaryens were on their way to Driftmark where Viserys hoped to propose a marriage between Rhaenyra and Laenor Velaryon (Theo Nate). Aboard the ship Viserys was stricken with seasickness while Ser Criston (Fabien Frankel) stood with Rhaenyra.

Upon arriving at High Tide, they were surprised when Lord Corlys wasn’t there to welcome the King. Lord Lyonel Strong (Gavin Spokes) was outraged. Instead they found Laenor sparring with his boyfriend, Joffrey Lonmouth (Solly McLeod). Lady Laena Velaryon (Savannah Steyn) greeted them instead and said her father had just returned from a long journey and was waiting in the Hall of Nine.

Inside, a clearly unwell Viserys was met by Corlys and Rhaenys (Eve Best). They told the news of the death of Lady Rhea. Viserys explained his proposal to unite their houses. Corlys said he was honoured but wanted certain details clarified first. He asked how the succession would be handled. Viserys explained that Rhaenyra was his heir, so her first born child would be first in line to inherit the Iron Throne. Corlys wanted to know that, as per tradition, that her children would take their father’s name and be born Velaryons. Viserys agreed to these terms but stated that once on the throne they would use the Targaryen name. Corlys said it was an equitable compromise.

Rhaenyra and Laenor took a walk together on the beach to discuss their union. The pair had grown up together so knew each other well. Rhaenyra was well aware of Laenor’s preferences. With little say in the marriage they agreed to basically tolerate each other and perform their duties. Outside of those they could do what they wanted. This arrangement suited Joffrey but Criston wasn’t happy. Instead he proposed they run away together to Essos but she refused.

Back at King’s Landing, Viserys collapsed. Alicent summoned Criston to question him about Rhaenyra in order to find out the truth. Instead Criston confessed to sleeping with her himself which surprised her. For his sins he asked that instead of torture that she sentence him to death. Instead she thanked him for his honesty and dismissed him.

The royal wedding was held at King’s Landing and was a grand affair. People traveled from all over Westeros to attend. At the feast, Alicent arrived late, seemingly in order to make an entrance. She walked in during the King’s speech, dressed in emerald green, the colour of House Hightower. This was presumably after her talks with her father, Larys and Criston. Also making an entrance was Daemon who was given a chair at the top table.

After Viserys finished his speech, Rhaenyra and Laenor performed their first dance as everyone watched. During the dance she gave glances to Criston which were picked up by Joffrey. When everyone else joined in the dancing, Joffrey told Laenor and then approached Criston to tell him he knew.

Daemon was approached by Ser Gerold Royce (Owen Oakeshott) and accused of killing Lady Rhea. Daemon said he’d be popping by in the near future to claim his inheritance as with no children, everything that Rhea owned was now his.

Daemon next took to the dance floor to speak with Rhaenyra. He told her that the marriage wasn’t for her and she replied with his words that marriage was just a political arrangement. She taunted him to take her back to Dragonstone and make her his wife. Viserys spotted them in the crowd but lost sight of them as he had a nose bleed.

Suddenly all chaos broke out, there was panic and screams. It wasn’t clear what was going on and the Ser Harwin ‘Breakbones’ Strong (Ryan Corr) was told to secure Rhaenyra. It turned out that Criston had lost his temper and smashed Joffrey’s face in with his bare hands.

At the end of the episode, Rhaenyra and Laenor were married and Viserys collapsed. Ouside in the godswood, Criston prepared to end his life with a dagger but he was stopped by Alicent.