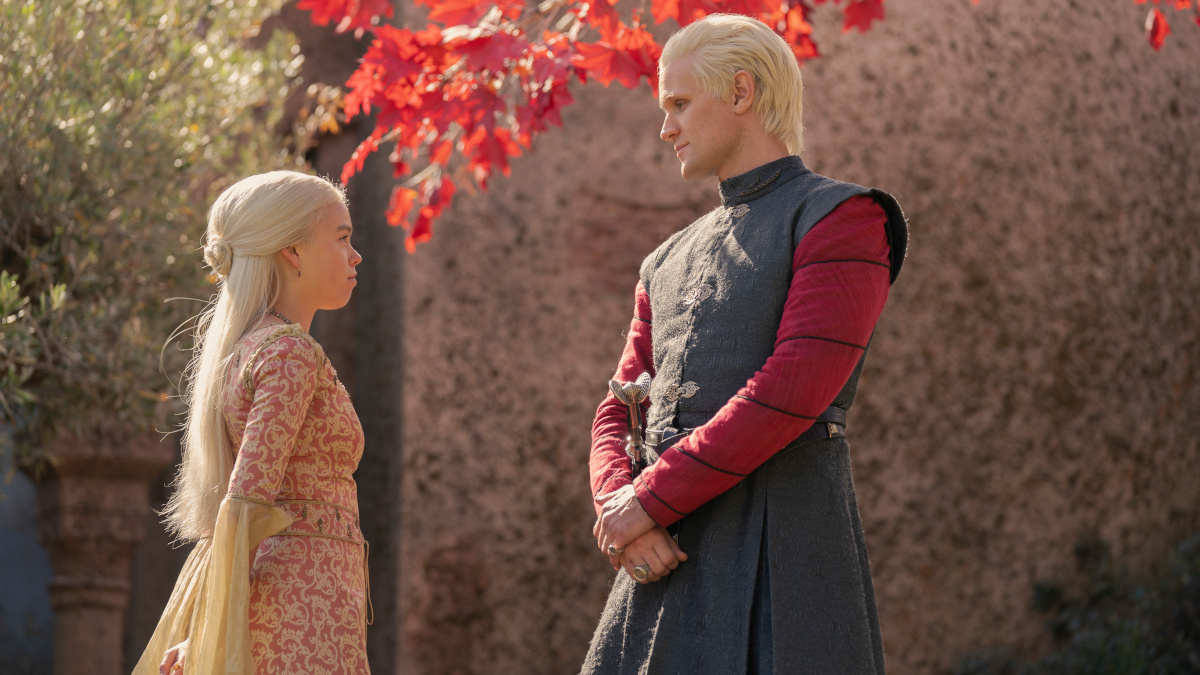 The fourth episode of House of the Dragon saw Daemon (Matt Smith) return and take his niece out for a night of debauchery.

The episode opened up in Storm’s End with Rhaenyra (Milly Alcock) meeting a seemingly endless line of suitors. Criston Cole (Fabien Frankel) stood by her side as she sat with Lord Boremund Baratheon (Julian Lewis Jones). Each candidate stepped forward in turn and set out their list of reasons that she should marry them. She amused herself by poking fun at each until a fight broke out after an argument between the candidates. She decided it was time to head back to King’s Landing.

As her ship approached the Red Keep, those aboard had to seek cover as Daemon flew close by on Caraxes. In the Great Hall, King Viserys (Paddy Considine) awaited the arrival of his brother.

Daemon made his entrance armed and wearing a crown. He approached Viserys and threw a sword to be added to his throne. Viserys asked of his crown and Daemon explained after smashing the Triarchy he was named King of the Narrow Sea. However, he knelt and told his brother he was the one true king. He offered him his crown and the Stepstones.

Daemon explained that Lord Corlys (Steve Toussaint) had sailed back home to Driftmark. He said they had left 2,000 dead Triarchy Corsairs staked to the sands as a warning to anyone else who tried to take them. Viserys examined Daemon’s crown and then told him to rise before embracing him. He told his brother that the realm owed him a great debt.

As they celebrated in the Godswood, Rhaenyra congratulated Daemon on his victory. Alicent (Emily Carey) spoke to Rhaenyra about how her tour of suitors had gone and pointed out how lucky she was to have a choice. Rhaenyra said they were only interested in marrying her for her blood. Alicent explained that Viserys was frustrated that she hadn’t yet found anyone suitable. She also confided in Rhaenyra that since becoming queen she had few friends.

Later, Rhaenyra asked Daemon why he’d come back from Dragonstone. He noticed she was wearing the necklace that he gave her and said he was back for the comforts of home. She spoke of the frustration of her father wanting her to marry and Daemon explained that it was just a political arrangement. He said once married she’d be able to do as she liked. She felt marriage was a death sentence and wanted to avoid the same fate as her mother.

The small council met and discussed how Lord Corlys was becoming as big a problem for them as the Crabfeeder. He was seeking marriage for his daughter which added yet more pressure on Rhaenyra to marry. She retired to her room after saying goodnight to Ser Criston who was standing guard.

In her room she noticed a bag containing peasants clothes and a note which had instructions of how to access a secret passage. Wearing the clothes she looked like a boy and sneaked out of the castle. She found Daemon waiting for her wearing similar attire. Together they headed for a night out in King’s Landing where they explored the busy streets and drank.

They stopped to watch a play based on the goings-on in the Red Keep. The play poked fun at the dilemma the king had choosing an heir. Daemon explained that the people would probably prefer a male heir. Daemon next took Rhaenyra to a brothel where he told her that sex could be a pleasure for both men and women. He said that marriage was a duty but that it didn’t stop them from doing what they wanted or being with who they wanted. The pair kissed, began undressing and became very intimate but appeared to stop short of having full sex. Daemon left her in a state of undress.

Meanwhile, at the Red Keep, Alicent helped Viserys bathe. During the night he requested her presence in order to have sex with her. It’s becoming clear that Viserys is rather unwell, being covered in sores and having lost a couple of fingers.

Rhaenyra went back to the Red Keep on her own and Ser Criston, having been stood on guard and not knowing she’d left, was surprised to see her returning to her room. She took his helmet and teased him to get him inside the room then blocked the door. As he stepped forward she kissed him and began to undress. He said she should stop but she took his hand and then began stripping him of his armour. The pair kissed then spent the night together.

Otto (Rhys Ifans) was alerted of a message from White Worm. The messenger was the boy who saw Rhaenyra and Daemon at the brothel. The next morning a hungover Daemon woke in the care of Mysaria (Sonoya Mizuno). She was visited by the messenger boy who gave her coins, so presumably she is White Worm?

Otto took the discomforting news about the exploits of Daemon and Rhaenyra to Viserys. The king was furious that someone would make up such a lie and said he would take their eyes. Otto backed up his claims but Viserys felt he was deliberately trying to destroy the reputation of the princess and threw him out.

Alicent overheard the conversation and sent Ser Criston to summon her. She asked Rhaenyra what had gone on with her uncle. Rhaenyra said he took her into the city for some fun. Alicent said she was accused of having sex with Daemon in a pleasure house. Rhaenyra replied that it was a vile accusation and explained that they had some drinks and saw a show before Daemon left her. She swore on her mother’s memory that Daemon never touched her.

When Daemon arrived back he was met by Ser Harrold Westerling (Graham McTavish) and taken straight to the king. Viserys confronted his brother about the allegations and Daemon didn’t deny them. Instead he said he wanted Rhaenyra and that Viserys should have her marry him. Viserys ordered him back to the Vale.

Alicent tried to comfort her husband by saying that it wasn’t in Rhaenyra’s nature to be deceitful. She also pointed out that Daemon often lied. Viserys said whatever went on that Rhaenyra wasn’t innocent. Alicent stood up for her and said she believed what Rhaenyra told her.

Viserys summoned Rhaenyra and showed her the Catspaw Dagger, the same Valyrian steel blade that was seen several times in Game of Thrones and used by Arya Stark to kill the Night King. He told her the history of the blade and heated it up to show a hidden message “From my blood, come the prince that was promised, and his will be the song of ice and fire”. Viserys said he was passing the responsibility of the burden of that knowledge.

Viserys told her that she would be marrying Ser Laenor Velaryon, the son of the Sea Snake, without protest. She called Otto a vulture and said she would marry Laenor if Viserys dealt with Otto. Viserys called Otto to him and stripped him of his title as Hand of the King.

At the end of the episode, Grand Maester Mellos (David Horovitch) brought a special tea to Rhaenyra that would ensure she wasn’t pregnant.