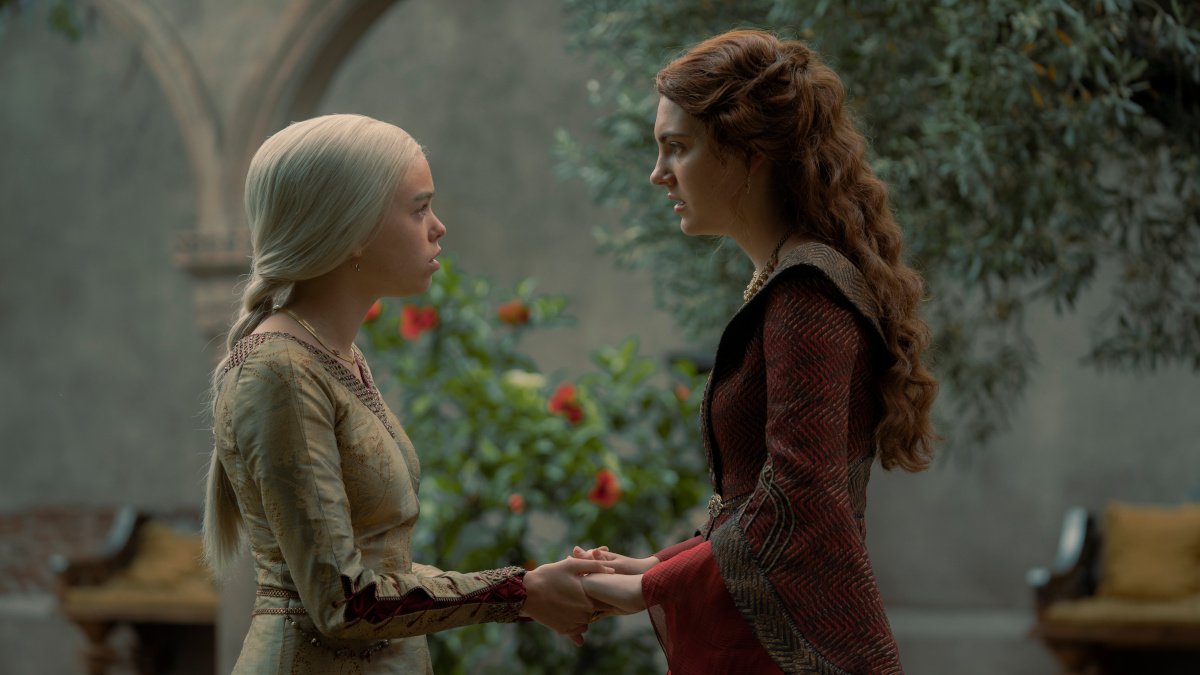 In the third episode of House of the Dragon we saw Daemon (Matt Smith) and the Sea Snake (Steve Toussaint) battle the Crabfeeder. Elsewhere the realm celebrated Aegon’s second nameday while Rhaenyra (Milly Alcock) faced the prospect of marriage.

If you aren’t up to date with House of the Dragon and prefer to avoid spoilers then please stop reading now.

Celebrations were held at King’s Landing, for the Aegon’s second nameday. These included feasts and hunting. Viserys (Paddy Considine) began to put pressure on Rhaenyra to marry but she wasn’t keen on the idea.

Rhaenyra was more worried that her father would name Aegon as his heir. She fled the hunt but was pursued by Criston Cole (Fabien Frankel) and they became closer.

Following their alliance, Daemon and the Sea Snake took the fight to the Crabfeeder. After much fighting, Daemon hatched a plan and attacked the Crabfeeder’s army solo. His distraction tactics worked and when the rest of his army joined in, Daemon was able to pinpoint and slay the Crabfeeder.

Read our House of the Dragon 1×03: Second of His Name recap for full details on the episode.

Episode 4 – King of the Narrow Sea

The fourth episode is titled “King of the Narrow Sea” and will run for 63 minutes. The episode is directed by Clare Kilner and written by Ira Parker. The episode 4 preview trailer and first images can be seen below.

The trailer opens up with Rhaenyra speaking the words “From my blood come the prince that was promised. And his will be the song of ice and fire.” She’s seen stood with her father while holding a dagger in flame.

Viserys is heard to say “The House of the Dragon will stand as one for a further generation”. Daemon is shown to enter the Great Hall and in the images he’s shown stood with his brother Viserys. Daemon is shown to present himself as “King of the Narrow Sea”. Has Daemon’s victory over the Crabfeeder got him back into the good books?

In one scene, Rhaenyra looks to be speaking to potential suitors. In another she seems to be at odds again with her father over the prospect of marriage.

Throughout the clip the words of a street performer are heard to say “Who will it be? The brother? The daughter? Or the little princeling of three?”. This implies that the topic of who will be the heir to the throne still isn’t resolved.

The trailer appears to show Daemon and Rhaenyra sneaking out of the Red Keep at night. Otto (Rhys Ifans) is shown to be reporting “discomforting news”. Viserys shows a darker side asking who is responsible for the gossip and threatens to “take their eyes”.

It seems the news refers to an accusation against Rhaenyra which she describes as “vile”. Alicent (Emily Carey) seems to be on Rhaenyra’s side. The Targaryen’s are known for their incest and it seems the accusations relate to something involving Daemon and Rhaenyra. We’ll have to keep watching to find out.

House of the Dragon episode 4 will air on the 12th September at 2am and 9pm on Sky Atlantic and NOW TV.