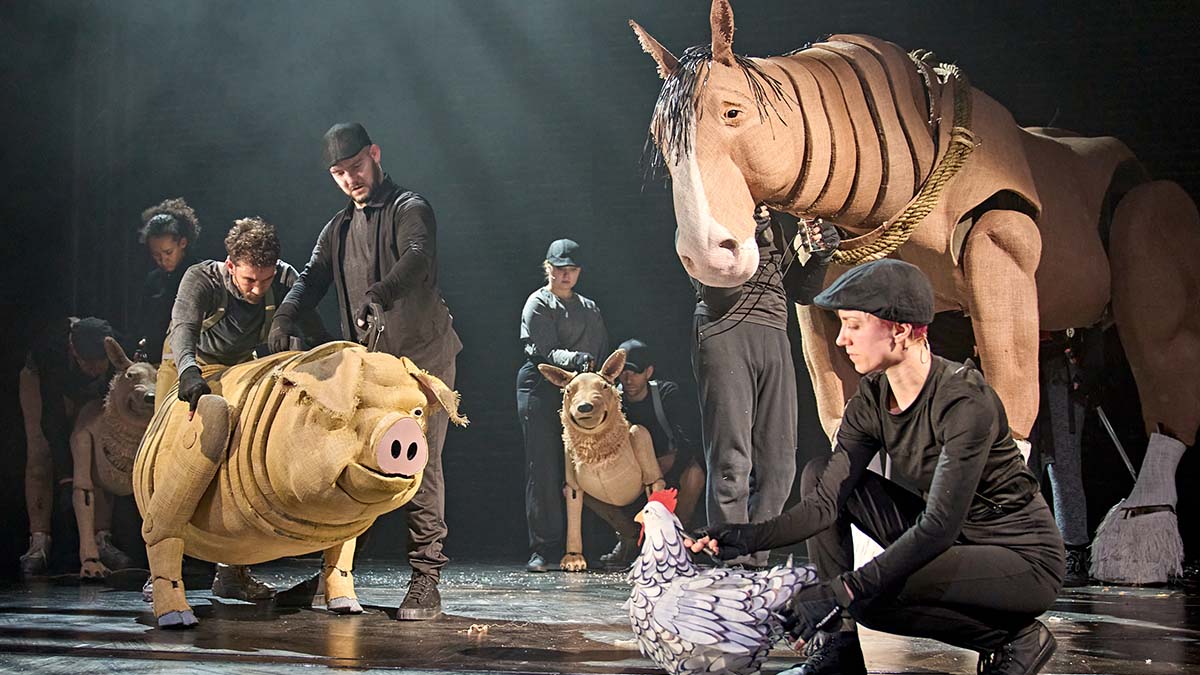 A stunning version of George Orwell’s timeless fable ‘Animal Farm’ is currently playing at the Churchill Theatre, Bromley. Life-size puppets bring into glorious being the menagerie of creatures that populate the pages of one of the most famous works of Twentieth Century Fiction.

If the Children’s Theatre Partnership’s intention with this full-blooded production is to introduce the political satire at the heart of Orwell’s novel to younger audiences, then they undoubtedly succeed. But they do so unapologetically, with a brutally honest and unflinching dramatisation of the famed novella, its violent scenes intact. Nevertheless, older children will be enthralled by the brilliance of the puppetry and absorbed by the powerful storytelling.

The Children’s Theatre Partnership offers a faithful retelling of Orwell’s first great satire on Stalinist Communism (he would follow it up with ‘Nineteen Eighty-Four’ a few years later). The animals of Manor Farm are many and varied. Yet the pigs, horses, dogs, goats and geese are all ruled over by Farmer Jones. They dream of a time when they could be liberated from their human overlords and live in freedom. Old Major, an elderly trotter on his deathbed, gives an old man’s vision of the perfect future, when all their work is done and they no longer live under human rule. When Old Major dies, the pigs, led by Napoleon, Snowball and Squealer, persuade the rest of the animals to enact their deceased leader’s prophecy, and they turn against Farmer Jones and free themselves from serfdom. Following a revolution, a new world order is established, and Manor Farm becomes ‘Animal Farm’. Eight rules, somewhat akin to the Ten Commandments, are brought in, the most important of which is, “All animals are equal”.

At this point, it may be expected that, with their new-found liberty and comradeship, the animals of ‘Animal Farm’ achieve utopia and live out their lives in harmony and plenty. Though of course, in satirising the Russian Revolution, Orwell’s fable reveals that the animals simply replace one set of chains for another, and one version of slavery and servitude for another. And the eight rules keep on subtly changing…

The themes of ‘Animal Farm’ are easy to grasp, yet difficult to wrestle with. As an inoculation against the seductive fantasies of left-wing utopianism, there is no more persuasive or accessible a story as ‘Animal Farm’, which is in part why Orwell had such a devil of a job seeing it published. But it remains the moral lesson of our times.

From the opening scene, in which the puppeteers blend seamlessly into the background as a crow demands our attention, it’s clear that we are in the company of master storytellers and theatre practitioners of inestimable skill and professionalism. From there, the production becomes ever more engrossing. The absence of an interval is inspired, since the pacing is unrelenting and any suspension might just break the spell that is created.

The faithful retelling of an incredible story may well provide a satisfying night out, but the brilliance of the puppetry has to be seen to be believed. The recreation of the pigs, dogs, birds, cat and goat is the indelible impression this production leaves on the mind. The technical control over the creatures, the animalistic sounds and the acutely-observed movements are breathtaking to behold. Moments in slow-motion or in smaller-scale puppetry simply add to the overall impressive effect. This is stunning, visceral, living and immersive theatre. It commands and holds the attention. It leaves audiences in its thrall.

Wisely, the opening scenes introduce a touch of levity and humour. There is enough bleakness to come to ensure that this is a sensible choice by director and adapter Robert Icke. Even up to the expulsion of Farmer Jones from his own home, we are willing to laugh along with the antics of the animals. Banter between the chickens is inspired and hilarious. Another ingenious idea is the electronic sign above the stage, and the tolling bell which counts every animal life lost in the revolutionary struggle to establish ‘Animal Farm’.

There were only minor criticisms of this production. The narration, fed in over the live action, and using the voices of actors of the calibre of Robert Glenister and Juliet Stevenson, isn’t always fully audible. Certainly, the louder creatures such as Napoleon and Boxer can always be heard, but the Liverpudlian goat’s dialogue was sometimes lost amongst the activity on the stage. There is a complexity to the plot of ‘Animal Farm’, and the similarity in appearance between Napoleon, Snowball, Squealer and the other pigs can make it harder for those less familiar with the story to follow the events on the stage.

However, any detractions from first-rate storytelling and truly stunning puppetry are miniscule. From first to last, this production of ‘Animal Farm’ gripped us and held us entranced. Indeed, the moment when the hardest-working of the animals is taken to his fate produced the same tears that the passage in the book always achieves. Whether this is your first experience of ‘Animal Farm’, or you are a devoted admirer of the book, this production is sure to enthral you. Younger audience members will be enraptured by the extraordinary skill of the puppeteers and the incredible storytelling in equal measure. Catch this near-perfect production of ‘Animal Farm’ whilst you can. It is a thrilling theatrical experience.