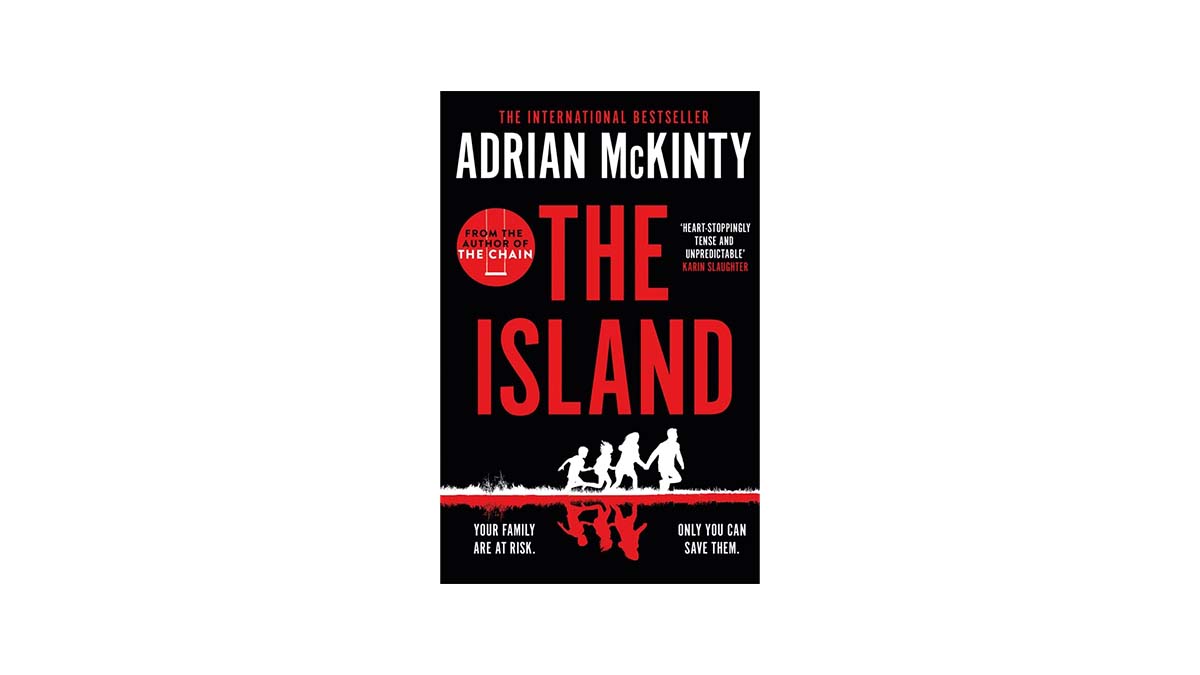 Heather reluctantly accompanies her husband Tom and her two step-children Olivia and Owen on holiday to Australia. Having never been outside of America before, and battling with a fractious relationship with the children, Heather is desperate to feel like part of the family. With Tom due to give a speech at a medical conference, the family takes some time beforehand to sight-see. When the chance arises to visit an island off the coast of Australia, the family jumps at the chance but soon regrets it when they commit a hit-and-run. As they try to get off the island, their actions are uncovered and the family is forced into a cat-and-mouse game of survival.

‘The Island’ is the latest thriller from New York-based, Belfast-born writer Adrian McKinty and it’s a real page-turner. Fans of the horror and thriller genres will be familiar with the tropes that McKinty uses here as he puts an American family in a fish-out-of-water scenario that sees them fighting for their lives. Making reference to the Australian horror film ‘Wolf Creek’ early on, ‘The Island’ is like a cross between that film and ‘The Texas Chain Saw Massacre’. It’s clear to the reader that Tom, Heather and the kids are going to be in danger as soon as they agree to visit an ‘off-the-map’ island and once they set foot on it, encountering strange people, it’s only a matter of time before their situation turns dire.

Taking a leaf from ‘I Know What You Did Last Summer’, the family is involved in a hit-and-run, and after tense conversation, they agree to hide the body and return to the mainland, promising to report what they’ve done. That of course doesn’t happen as the family that inhabits the island, the O’Neills, take matters into their own hands to try and exact revenge. Tom and Heather’s actions don’t only affect them and the kids, it drags in two other tourists – Hans and Petra – too. A quickly escalating turn of events leaves the family fleeing and trying to survive on an island that has no community or civilisation, other than the unwieldy O’Neill clan who is hellbent on tracking them down and killing them.

For the most part ‘The Island’ is an addictive read. Its short chapters often end with moments that make you want to read on and I read the book in three sittings. As a fan of horror and thriller, it definitely appealed to me and while I did very much enjoy the book, I couldn’t overlook all of its flaws. The biggest problem McKinty has here is that often the characters do things that just aren’t believable. Despite clearly being in a life-or-death situation, one character firmly believes that turning themselves in to the family pursuing them could resolve the situation and get them back to the mainland. These kinds of foolish decisions just don’t ring true.

Given that the story unfolds over a handful of days, the relationships between the main characters seem to change too quickly. Heather, who is in her mid-20s, has barely any relationship with Tom’s children, and she even says she never wanted to be their step-mother, yet she behaves very maternal towards them. They in turn fight her every step of the way… until they just don’t anymore and I didn’t believe it would resolve as quickly as it did.

Despite is flaws, I still found myself eager to get to the end and I have to say the ending was a little bit anti-climactic. Everything fell into place a little too conveniently and it didn’t feel like the explosive ending I’d come to expect from the previous 300 or so pages. I don’t want to say much more so I don’t give anything away but the plot has too many moments where things fall into line too easily for you to be able to fully believe what’s unfolding.

‘The Island’ is a solid read but a tighter story and a little more realism would have really helped it. I’m all for an escapist read, and I did genuinely enjoy the book, but it was so silly at points that I struggled to go along with the plot without asking questions. The weak ending did leave me disappointed and I don’t think it was a fitting enough end to a story that featured some truly kick-ass main characters.

In this article:Adrian McKinty, Orion Books, The Island