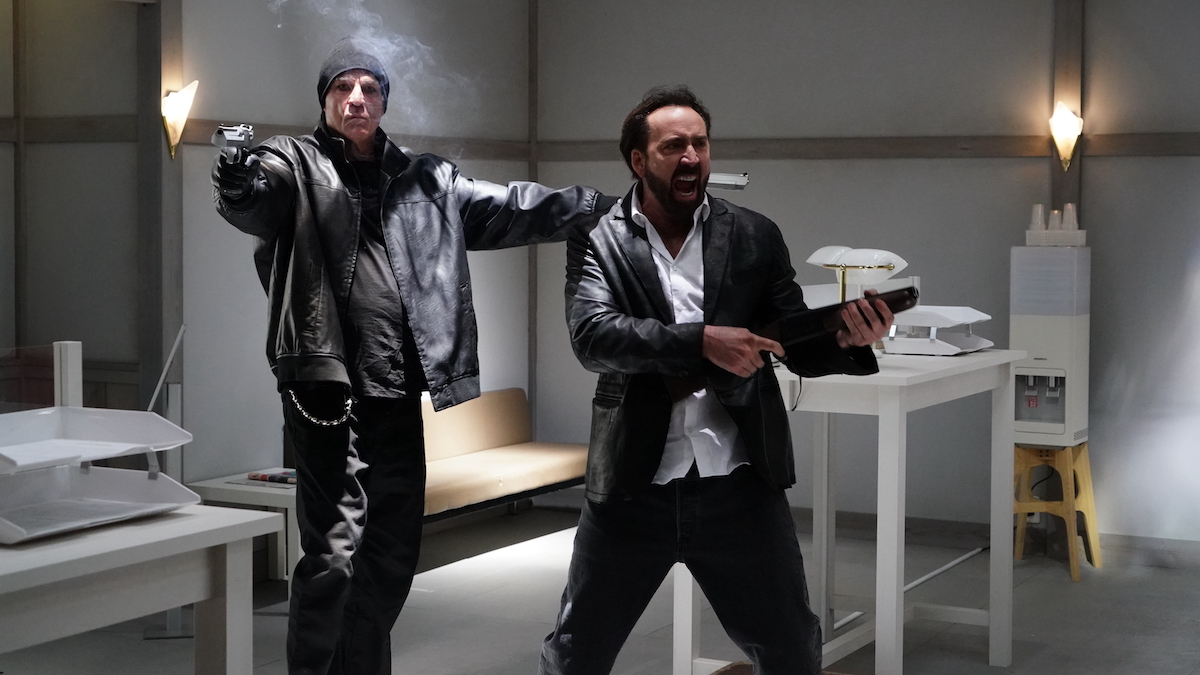 ‘Prisoners of the Ghostland’ is the most boring film I have ever seen that is also a supernatural-post-apocalyptic-samurai-western-horror where Nicolas Cage has explosives strapped to his bollocks. As far as elevator pitches go, that’s a pretty damn good one. But for everything that renowned arthouse filmmaker Sion Sono throws at the screen—which is a lot—it just does not work at all.

Set in the wake of some non-specific atomic catastrophe, a sleazy Governor (Bill Moseley) has taken a sort of feudal/martial control of Samurai Town. The place is a neon drenched frontier, full of whorehouses and saloons like something out of the Old West, except that it’s somewhere in Japan. The Governor runs the town by force with his posse of gunslingers and samurai. When Bernice (Sofia Boutella), one of his “granddaughters” runs away, he believes she has been taken by the mysterious spectral forces in The Ghostland (the irradiated wastelands beyond the border of the town) so he hires an imprisoned bank robber (Nic Cage) to retrieve her.

To ensure he complies, the robber is fitted with an explosive suit that cannot be removed. Charges are set around his arms, his neck, and his testicles. If he mistreats Bernice in anyway, the arms will explode. If he tries anything frisky with her, the nuts will explode. And if he is not back within 5-days, the whole thing goes boom. He is then sent on his way to get her.

‘Prisoners of the Ghostland’ somehow manages to be as completely mad as it sounds, and also a big dull dud. Sion Sono, who has made some really weird and interesting films in the past, is unquestionably the wrong man for this material. There are some nice stylistic flourishes, it’s quite trippy and hallucinogenic, but the deranged comic book aesthetic never really gels with the material as it should, because the film is being pulled in three different directions.

The script, from actors Aaron Hendry and Reza Sixo Safai, is one thing; a kind of genre mash-up action thriller. It’s a fun idea and could totally work. The film Sono has made however, is something else entirely. He brings a mournful surrealism to the film which tonally and thematically jars with the lean, John Carpenter-esque plot. Then you’ve got Cage, who not for the first time in his career, is acting in a completely different film to the one that is being made around him. He is on another wavelength to everyone else, and honestly, he is pretty terrible.

I think it’s a fair thing to say that with this premise, this director, and Nic Cage in the lead role, ‘Prisoners of the Ghostland’ should be good. At the very least it should be fun. But it’s neither of those things. It is the worst kind of B-movie trash: boring, incomprehensible, and borderline unwatchable. We can’t just keep giving films a free pass because they look stylish, and we can’t just keep saying a film is funny because Nic Cage acts like a crazy person.

I’ve no doubt that basic internet fans who worship every piece of nutty shit Nic Cage appears in will probably like it, declaring it ‘wild’ and ‘bonkers’ and the ‘maddest film of the year’. Good luck to them. For the rest of us however, we are left to lament yet another sad performance in yet another dreck film, in what is just another depressing step towards paying off his tax debt. To think this came out within a month of ‘Pig’ is enough to give you whiplash. One of his very best and one of his worst in the space of a few short weeks.

The blu-ray release comes with a short behind the scenes featurette, which is horribly scored all the way through, and features interviews with the three main cast members. There is a Q and A moderated by Alan Jones, with the director Sion Sono and producer Kô Moro from the UK premiere at FrightFest. Finally, there is the UK theatrical trailer.