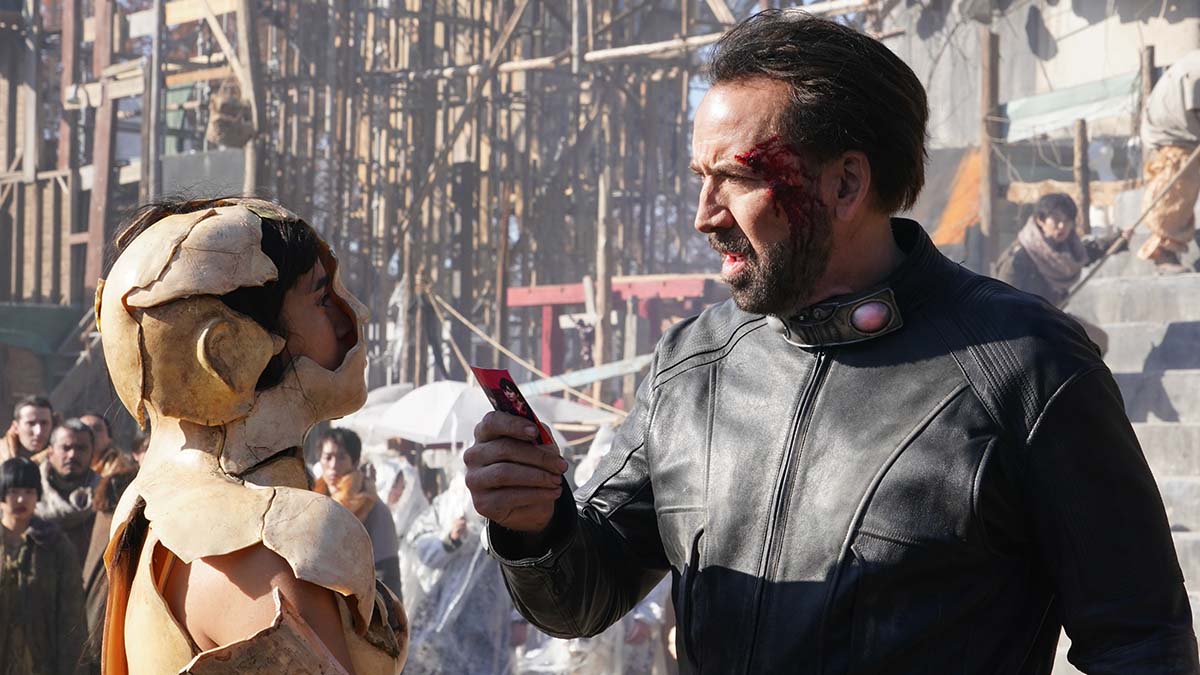 Bank robber Hero (Nicolas Cage) is released from jail by Samurai Town’s wealthy warlord The Governor (Bill Moseley). In exchange for his freedom, Hero is tasked with locating and returning The Governor’s missing daughter Bernice (Sofia Boutella) but there’s a catch – the leather suit he is forced to wear is programmed to self-destruct in three days if Hero doesn’t return Bernice within that time frame. Setting off on his mission, Hero journeys through the treacherous city as the clock starts to count down.

‘Prisoners of the Ghostland’ is the latest film from Japanese director Sion Sono (‘Suicide Club’) and it’s fair to say that it’s going to be a Marmite film for audiences. His first English-language film, ‘Prisoners of the Ghostland’ is flat out bonkers and that works both in its favour and against it. The striking cinematography is what will draw you in, with Sono using vibrant colours and fantastic camerawork to bring his vision to life. Samurai Town looks like an Eastern reimagining of ‘Mad Max’, and to be honest that’s not the only ‘Mad Max’ comparison you could make here.

We see the event that led to Hero being imprisoned – a bank heist gone wrong, which ends with the death of a child – so audiences aren’t immediately on his side. That soon changes though as Hero is the only sympathetic character in the film and Cage is so wonderfully crazy in the role, that you can’t help but cross your fingers that he’ll pull off his mission. The leather suit he’s stuck in features explosives in key places like across Hero’s neck and testicles (there’s a pretty painful scene around the mid-point of the movie), and that helps to up the stakes a little.

Where the film falls down though is that the story is pretty much incoherent. The rescue of Bernice becomes secondary to the crazy shenanigans that take up the majority of the film’s run-time. Events just seem to happen for no particular reason and they don’t often relate to one another or advance the film. That means the tone is all over the place as the film ticks off Western, Horror, Action and Comedy all in the first 30 minutes. Throw into the mix the idea of a community that is trying to stop time, and well it doesn’t really make all that much sense.

Outside of Cage, Bill Moseley is fun as The Governor but Sofia Boutella is completely wasted. Boutella is a very capable actress (she was the best thing about Gaspar Noé’s migraine-inducing ‘Climax’) but here she gets to do nothing other than be a damsel in distress. It’s a real shame because the film could have done with being a bit more grounded in reality and more development of Boutella’s Bernice could have achieved that.

‘Prisoners of the Ghostland’ takes a kitchen sink approach to film-making and sadly it just doesn’t really work. The film looks beautiful and there are some enjoyable moments but it doesn’t hang together as a cohesive body of work. Cage fans will lap it up, especially as this could be his craziest role to date, but outside of his performance there’s not a lot to keep your attention. Essentially the film is a ‘Mad Max’ re-tread but without the smarts of that film or a narrative that will keep you invested.

‘Prisoners of the Ghostland’ will be released in cinemas and on digital on 17th September 2021.