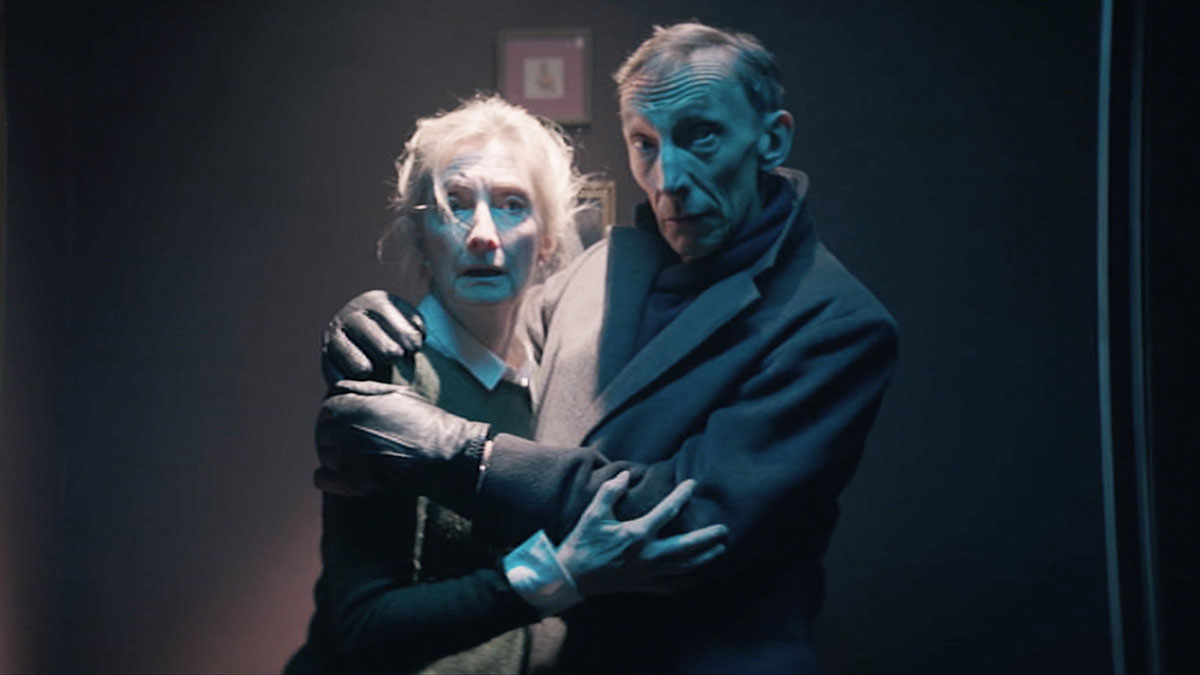 Audrey (Sheila McCarthy) and her doctor husband Henry (Julian Richings) seem like your typical normal harmless grandparents. Grieving over the loss of their daughter and grandson, the couple decides to try and bring their grandson back from the dead using an ancient spellbook. With the help of the satanic cult they are part of, Audrey and Henry kidnap heavily pregnant Shannon (Konstantina Mantelos) so they can put the soul of their late grandson into her unborn baby.

‘Anything For Jackson’ has possibly one of the best openings for a horror film I’ve seen in quite some time. We’re introduced to Audrey and Henry as they enjoy small talk with one another, only for that to be disrupted by a knock at the door. This lovely old couple, it turns out, are Satanists and the knock at the door is the delivery of Shannon, a patient of Henry’s that’s he’d identified as the perfect person to ‘go missing’ so they could steal her baby. Director Justin G. Dyck purposely unsettles you and that’s only the beginning of the nightmare that Shannon, and the viewer, will go through.

Trying everything it can to unnerve you, ‘Anything For Jackson’ is a series of increasingly disturbing sequences that show how out of their depth Audrey and Henry are. Of the two Audrey is keener to throw herself into summoning their grandson back from the dead but when she does so, she unleashes holy hell on the house. Shannon, terrified and tied to a bed in a soundproof room, bears witness to some real horrors but Audrey too is tormented and terrified by the array of monsters that make their way into the house.

There’s no denying that the story is a little bonkers but Keith Cooper’s script ensures that you stay for the ride. We get flashbacks of how Shannon came to be on Henry’s radar and Konstantina Mantelos’ performance drags you kicking and screaming right into the middle of her terror. This is one of those films where you can’t take your eyes off the screen but at the same time you can’t bear to look at what’s unfolding. If you imagine a mixture of the Japanese ‘Grudge’ franchise and Clive Barker at his finest, ‘Anything For Jackson’ is what you’d get.

Sheila McCarthy and Julian Richings are strong as Audrey and Henry too. They play ‘normal’ incredibly well and you, as Shannon does, will have a hard time understanding how two seemingly lovely people got themselves caught up in Satanism. Cooper’s story highlights the lengths people can be pushed to when they’re consumed by grief and McCarthy and Richings really bring the conflict of their characters to the surface.

‘Anything For Jackson’ is a wild ride and if you don’t scrutinise the story too much you’ll really enjoy it. The film really is a visual nightmare treat for horror fans and it’s deeply unsettling in parts. With a strong cast, fantastic special effects and sounds, and a truly disturbing plot, ‘Anything For Jackson’ will stay with you long after the credits roll.