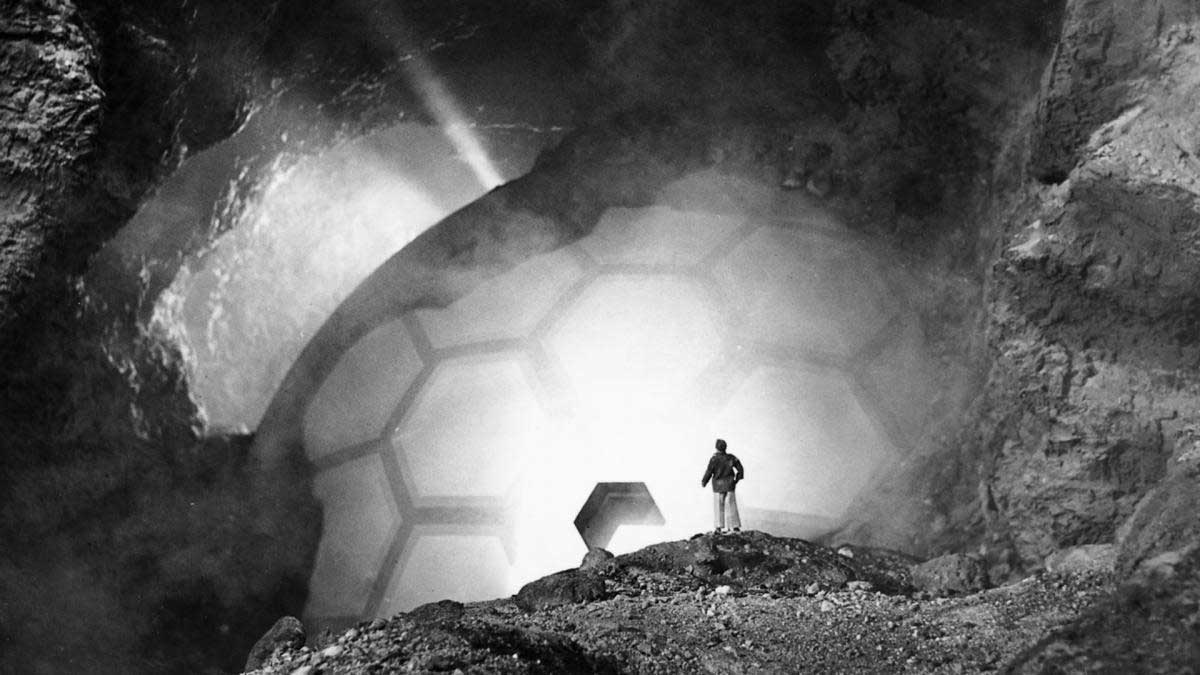 The classic 1953 Hollywood science-fiction film ‘It Came From Outer Space’ arrives on Blu-ray. It stars Richard Carlson as John Putnam, an amateur astronomer who spots what he imagines to be a meteor crashing into the desert. Investigating the impact crater with his wife Ellen (Barbara Rush), he finds an alien spacecraft at the bottom of it – and what’s more – there were survivors!

The spaceship is buried under an avalanche of rockfall, hiding the evidence that it even exists from the authorities. John is determined to uncover the truth about the extra-terrestrial visitors, especially after he learns that they can shapeshift and take on human appearance. But what are they and why have they come?

‘It Came From Outer Space’ is an enjoyable black and white film based on a story by Ray Bradbury (Fahrenheit 451). Like all clever science-fiction, it plays on contemporary concerns by making parallels. In this instance, the story is full of Cold War-era paranoia, as John realises he can’t trust anyone, knowing that they may be a ‘double agent’ and an alien in disguise. It was also made less than a decade after the end of World War Two, when the threat of Nazi or Soviet invasion had been a distinct possibility for America, and had been the actual fate of many European countries.

Bradbury cleverly subverts our expectations, giving an explanation for the appearance of the aliens that runs against standard tropes. In so doing, the film allows audiences to shift their sympathies, but in a way that perhaps undermines the dramatic impact of the story.

The special effects of the era are impressive, especially the honeycomb design of the alien spacecraft. Its collision with the desert opens the film with a literal bang. Sensibly, the aliens are kept off screen for much of the film, except when they are doubling as humans. This increases the sense of menace from an unseen and unknown threat. The imagination is always more terrifying than reality. Though the eventual half-reveal of the creatures doesn’t quite stand the test of time, the wobbly effect of seeing through their eye is well-achieved. The movie was originally made for 3D, and there are directorial choices by Jack Arnold of deep perspectives and objects in the foreground that were clearly made to make the most of the gimmick, though as the documentary on the extra features points out, a lot of this is lost in 2D.

The performances are solid. Richard Carlson makes for a rugged and earnest hero, and Barbara Rush is credible both as his wife and as the alien double. A musical score by Irving Gertz, Henry Mancini, and Herman Stein is highly effective. Although later something of a movie cliche, the theremin is innovatively utilised to create an eerie atmosphere.

Despite the world of the story operating on a fairly small scale, the film doesn’t outstay its welcome, with a short running time of eighty minutes. ‘It Came From Outer Space’ influenced many films that came after it, so its set pieces feel familiar to modern audiences. If you love classic movies, you’ll find a lot to enjoy. If you prefer more sophisticated modern science-fiction and state of the art effects, this one may fall short of expectations.

The extra-feature documentary on the movie (The Universe According to Universal) isn’t new, but is well worth a watch for putting ‘It Came From Outer Space’ into context with other science-fiction films that came out during the era. There is also a feature commentary with film historian Tom Weaver, 2D and 3D trailers and a gallery.