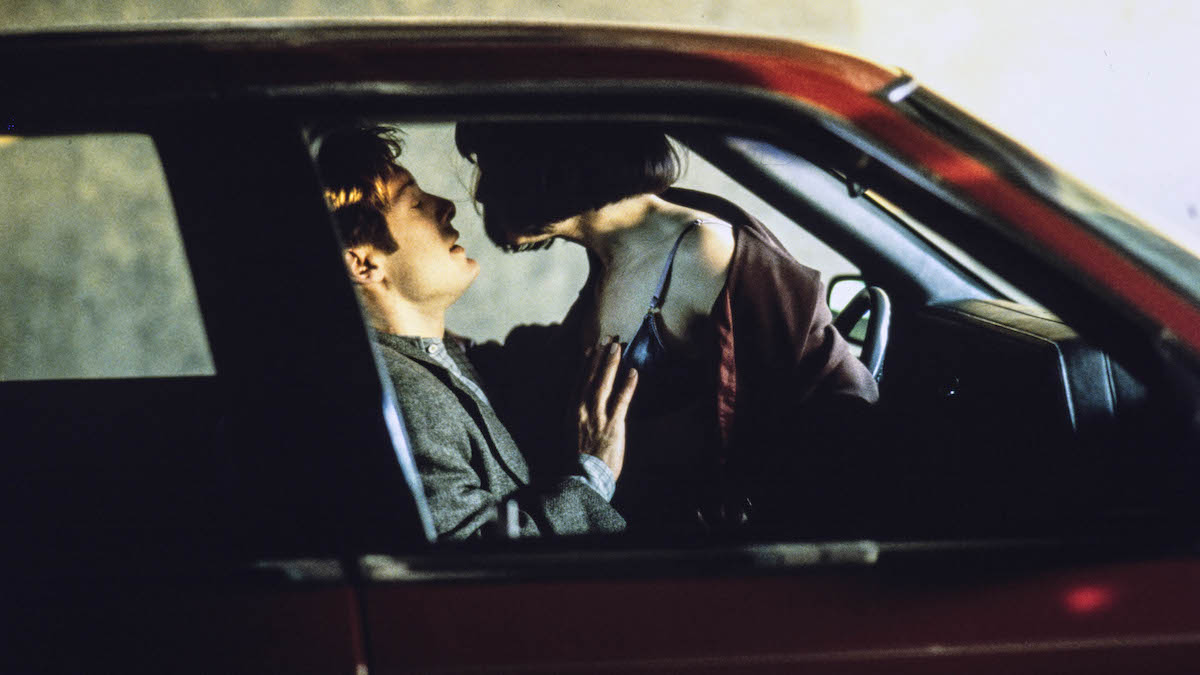 “Ban this Car Crash Sex Film” was the typically pearl-clutching headline from the Daily Mail back in 1996. Try as they might, they only managed to get the film banned in a single council in the UK, but this should give you an idea as to how controversial Crash was when it was first released. Looking back at it now, it all seems so overblown. It’s just a weird little film with a couple of nasty car crashes and a lot of soft-core sex scenes in it.

It has now been restored in a very impressive and crisp 4K, and given a special edition release courtesy of Arrow Video. Strangely enough—in one of those odd home video rights issues—whilst we are getting the Arrow release in the UK, our friends in the US are being treated a Criterion Collection version of the film at the same time. Who is getting the better end of the deal I wonder? More on that later.

Based on the 1973 novel by J.G. Ballard and adapted and directed by David Cronenberg, Crash tells the story of film director James (James Spader) and his wife Catherine (Deborah Kara Unger). They have an open marriage, and a seemingly jaded relationship. Nothing excites them anymore. After being involved in a terrible car accident, James starts an affair with Helen (Holly Hunter), the woman who was driving the other car he collided with.

Having been initially terrified to get behind the wheel of a car again, James and Helen soon discover that they are aroused by the wreckage of their cars. Something about the violent, penetrative damage of metal and machinery on the human body triggers something in them both. Driving together they get involved in another minor accident, and then fuck in the back seat.

Their new found primal desires bring them into a strange circle of car crash weirdos, led by Vaughn (Elias Koteas), a man obsessed with vehicular mayhem, and who recreates famous Hollywood car crashes for psychological and sexual thrills. James introduces Catherine into this world of kinky violence, and soon they are all embarking on various fetishized trysts with each other in the bloodied back seats of cars.

Now you may be thinking ‘who on earth gets a sexual kick out of being in a life-altering and body destroying car crash’ – and the answer is no one. The characters in Crash are utterly detached from what we recognize as normal human behaviour. They are bleak, nihilistic cyphers, completely empty, and devoid of emotion. In other words, classic Ballardian characters. We have no idea who they are at the start of the film, and even less by the end.

But that’s probably the point. Cronenberg, a director who is known for his fleshy interest in body horror and body transformation, takes a much cooler and dispassionate gaze at the characters in Crash, making them impossible to relate and identify with. The performances are icy and detached, and the frequent graphic sex scenes are passionless and voyeuristic. There are no thrills to be had from watching this film.

So peaking underneath the hood of all the kink, controversy, and sexual freakiness, what does Crash really have to say about anything? Personally, I don’t think it has anything to say. It’s a film as empty as the internal lives of the characters, which is precisely why this is arguably the best adaptation of a Ballard novel we have ever seen. Yes, it makes some changes from the source, but it perfectly captures the bleak psychological landscape of Ballard’s prose. In terms of what is sets out to achieve, it is faultless. It’s just not enjoyable or interesting in the slightest.

This being an Arrow special edition release, you can rest assured that the disc is chock full of bonus features. I would go so far as to say that Arrow have pulled together a better disc for this UK release, than Criterion have for the US market. It’s not very often that Criterion is bettered in the realm of home entertainment, but here we are.

To kick things off we are presented with nearly 90-minutes of brand-new interviews with key collaborators on the film. These include director of photography Peter Suschitzky, executive producer Jeremy Thomas (who was one of the key people driving this 4K restoration), composer Howard Shore, and casting director Deirdre Bowen.

We then delve into the archives, with numerous interviews from 1996, including David Cronenberg, J.G. Ballard, and the four main cast members. It’s interesting to hear them speak about their involvement in the film, and the fear of tackling such controversial subject matter. Next up is a 10-minute behind the scenes featurette, which is just a selection of fly-on-the-wall style footage captured on set during a night shoot on the film.

At TIFF (the Toronto International Film Festival) in 2019, Crash was screened as part of a special event at the festival. Included here is the introduction for that event, conducted by three-time Cronenberg collaborator Viggo Mortensen, and then the Q&A afterwards with the director himself. Jumping back in time again, the next bonus feature is a very long conversation recorded at the BFI in 1996 between Cronenberg and Ballard.

Architect of Pain is a short video essay by Caelum Vatnsdal examining Cronenberg’s use of architecture and location. Next up we take a dive into a selection of short films inspired by or loosely based on Crash. First up is Crash! (1971) directed by Harley Cokeliss and starring Ballard himself. This short predates the publication of the novel Crash, but deals with some of the key themes his novel would explore.

Rounding off the disc are two short films directed by Cronenberg himself, The Nest (2013, 10 mins) and At the Suicide of the Last Jew in the World in the Last Cinema in the World (2007, 4 mins), the two original trailers (including the NC-17 version), and a feature length audio commentary option with film scholar Adrian Martin.

The overall excellence of this release earns it an extra star.