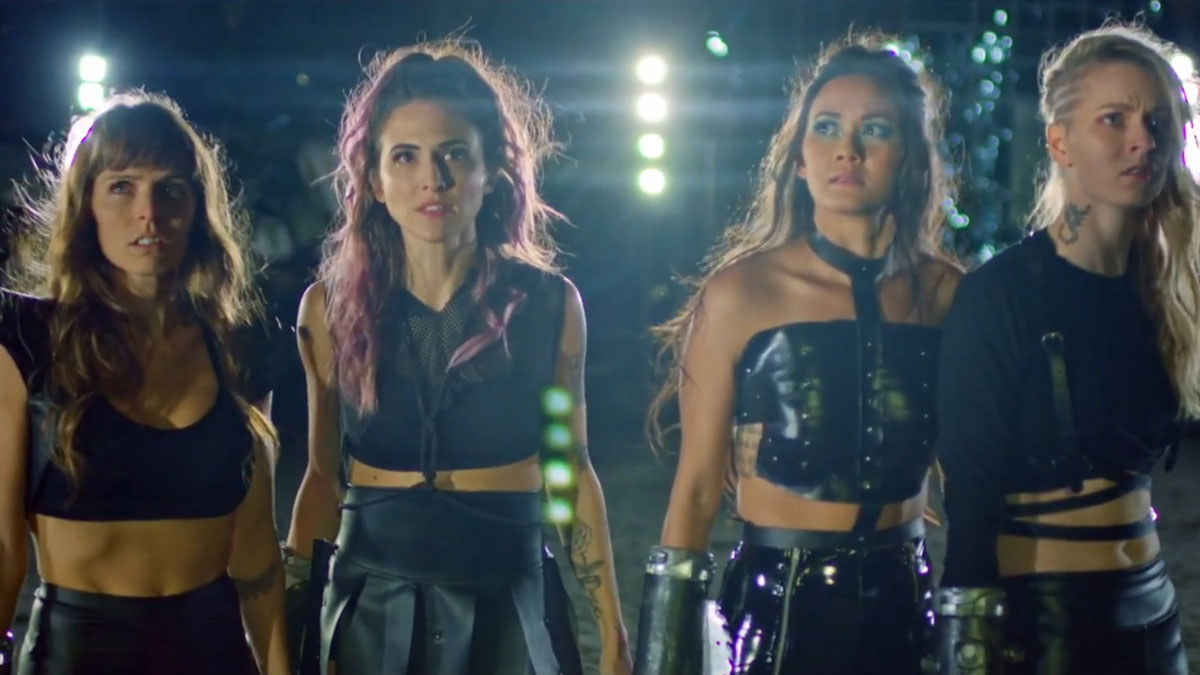 The four members of a punk rock band get into a fight with the locals while playing a show at a biker bar. Made up of sisters Amy (Michelle Argyris) and Emma (Emily Alatalo), and couple Cassy (Kiriana Stanton) and Jill (Chelsea Muirhead), the band emerge from the fight victorious and catch the eye of audience member Sam (Jason Rouse). After packing up their van, the women are taunted on the road by Sam, which leads them to blow a tyre. Flagging down the police, the girls are taken to a scrapyard where they are held captive and their bodies modified before being thrown into a gladiator style tournament.

‘Spare Parts’ has a very disturbing concept. Body modification is one of the horror sub-genres that doesn’t sit too well with me but the film starts off with an interesting premise that kept me hooked. It’s fairly obvious to the viewer that the women are placing themselves in danger but the moments shown where their bodies are being modified while they are unconscious are deeply unsettling, especially as one of the women is watching it happen.

The twisted game they are thrown into, sees each of the girls sporting a deadly weapon where their arm used to be and they are overseen by the Emperor (Julian Richings) as they have to fight to the death with complete strangers. Any idea that they’ll win back their freedom quickly goes out of the window and the four women realise they have to fight for their lives. Division escalates quickly as Emma is favoured by Sam and kept separate from the other women, and the battle between Emma and her sister Amy threatens to overshadow the situation they find themselves in.

At its core ‘Spare Parts’ is a decent story and the film is certainly watchable. Body modification aside, where the film begins to fall down is that the fight scenes become repetitive and the reason behind the tournament feels very tacked on. The Emperor prattles on about appeasing the Gods but not enough is made of that plot for it to hold much weight. You know from the beginning which of the four girls will be picked off quickly and which will go on to the end, which makes it hard to really connect with the characters.

The four actresses are game and do a solid job. Michelle Argyris brings a real fighting edge to her character while Emily Alatalo counters her with a softer edge. Julian Richings chews the scenery, which is all he’s required to do, but his character isn’t fleshed out well enough for the viewer to invest in.

‘Spare Parts’ is an interesting concept that’s entertaining enough but it never rises to greatness. The whys of the situation aren’t explained in a satisfactory enough way and after a while you do tire of the constant repetitive fight scenes. The film’s tendency to be gratuitous with the gore hampers it too as some of the special effects pull you out of the realism the film is aiming for. ‘Spare Parts’ is fun, silly and probably not a film you’ll need to rewatch.