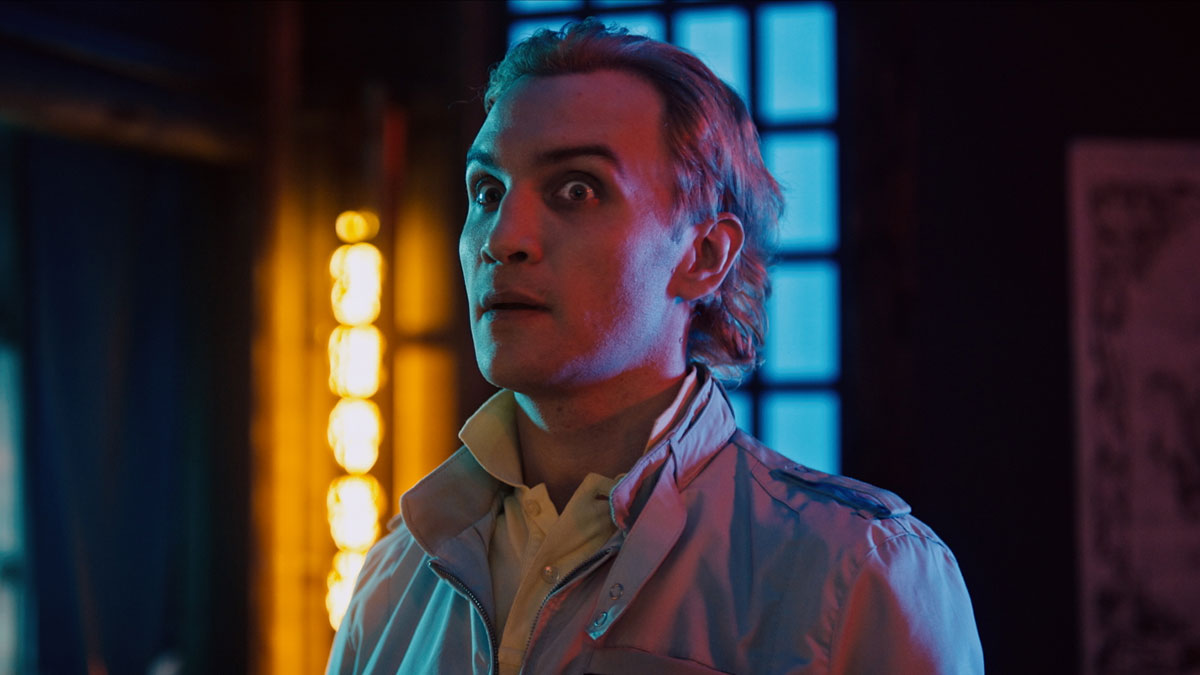 Sarcastic film critic Joel (Evan Marsh) finds himself in the middle of a support group for serial killers after a bender in a local bar. Passing out in a cupboard, Joel wakes up to find the group meeting to share stories about their murders. Accidentally taking the place of the new member, who hasn’t shown up, Joel tries to pass himself off as a serial killer but his plans go awry when Bob (Ari Millen), a man he’d met earlier the same evening, arrives at the meeting and cast doubts over Joel’s claims. Can he survive the night?

Set in the 80s, ‘Vicious Fun’ is a zippy, brightly-coloured, seriously meta action-horror that packs in plenty of laughs and gore. From film-maker Cody Calahan, the film wins you over fairly quickly thanks to the performance of lead actor Evan Marsh as loveable douche bag Joel. In love with his room-mate and working for a horror magazine, Joel doesn’t have a whole lot of direction in life and it’s his fish-out-of-water situation with the serial killers that provides much of the entertainment here.

With fast-paced dialogue and a fast escalating plot, ‘Vicious Fun’ takes an original idea and runs with it. I don’t want to give too many details beyond what I’ve said already as the film has plenty of surprises up its sleeve and I wouldn’t want to ruin those for you. Suffice to say, not everything is quite as it seems and that’s something that Joel learns very, very quickly.

The direction from Calahan is strong too and he never allows the audience to get bored, quickly moving from one scenario to the next. The film looks fantastic too with bright colours and lighting really bringing Calahan’s world to life. I have to mention the soundtrack too from Steph Copeland, which pulsates along providing a real energy throughout the whole film.

One of the reasons the film works so well is because of its fantastic cast. ‘Orphan Black’ star Ari Millen is the scene-stealer as the unhinged killer Bob, giving a full-on balls-to-the-wall performance that’s very entertaining to watch. He’s surrounded by strong support from the likes of horror regular Julian Richings and former wrestler Robert Maillet. Amber Goldfarb is brilliant as Carrie, the hardened killer that takes Evan quickly under her wing.

‘Vicious Fun’ delivers on its title. The film breezes by at breakneck speed and it packs in plenty of great moments along the way. With a strong aesthetic, a stellar cast and impressive direction, ‘Vicious Fun’ is the kind of film that will find an audience through word-of-mouth. It’s creative, refreshing and a real rollercoaster of a ride.